Justice sought for sick maid who died after returning from Kuwait 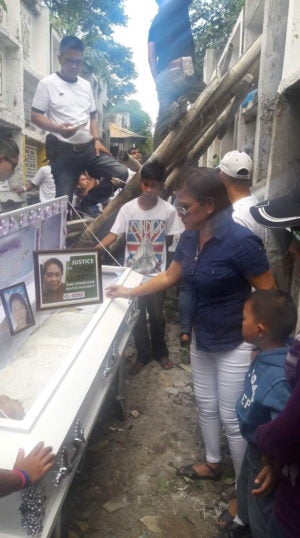 Josie Perez Lloren returns home without having to see her loved ones. She was buried at the public cemetery in Murcia town in Negros Occidental after she died in a hospital in Caloocan City, two weeks after she returned from Kuwait. (Carla P.Goez, Inquirer Visayas )

BACOLOD CITY — Josie Perez Lloren, 40, was very ill when she returned home on Jan. 26 after working in Kuwait as a maid for a little more than two years.

About two weeks later, she died in a hospital in Caloocan City where she had been taken immediately after her arrival.

Lloren didn’t get to go home to her hometown in Murcia, Negros Occidental.

“We want to know what happened to my sister in Kuwait, and we are seeking [the] government’s help,” said Lloren’s brother, Greg Perez, a jeepney driver who works in Cebu.

Monina Gulmatico, Migrante head in Negros Occidental, said the group would raise the case of Lloren at the Senate hearing on Wednesday.

The hearing will tackle the death of Filipino maid Joanna Demafelis of Sara, Iloilo province, whose body was discovered in a freezer in Kuwait recently, and other victims of abuse and maltreatment in the wealthy Gulf state.

Lloren left her hometown in in 2016 to work in Kuwait to support her family.

Perez said his sister complained that the wife of her employer maltreated her and would sometimes lock her up and make her sleep in the comfort room.

He said she had told her recruitment agency about the maltreatment but it only assigned her to another employer instead of reporting the abuse to the Overseas Workers Welfare Administration (Owwa), and allowing her to return to the Philippines.

Lloren failed to renew her Owwa membership while working for her second employer, who made her work “very hard,” Perez said.

In January, Migrante facilitated her return to the Philippines because she was suffering from acute ulcers that caused bleeding in her stomach.

Gulmatico said she suspected that Lloren was not fed properly, which caused her ulcers.

Lloren’s remains were taken home to Murcia last Friday. She was buried at the public cemetery there on Monday.

Migrante dared President Duterte to investigate erring officials who failed to look into the plight of Filipino migrant workers.

“We call on the Duterte administration to publicize the bilateral agreement it intends to sign with Kuwait with regard to the protection of Filipino workers and ensure that the voices of [migrants] will be heard and their demands be included,” it said.

“May the perpetrators be punished as we also raise our call for justice for all the many victims of the government’s negligence toward distressed migrants in dire need of immediate help,” Migrante said.