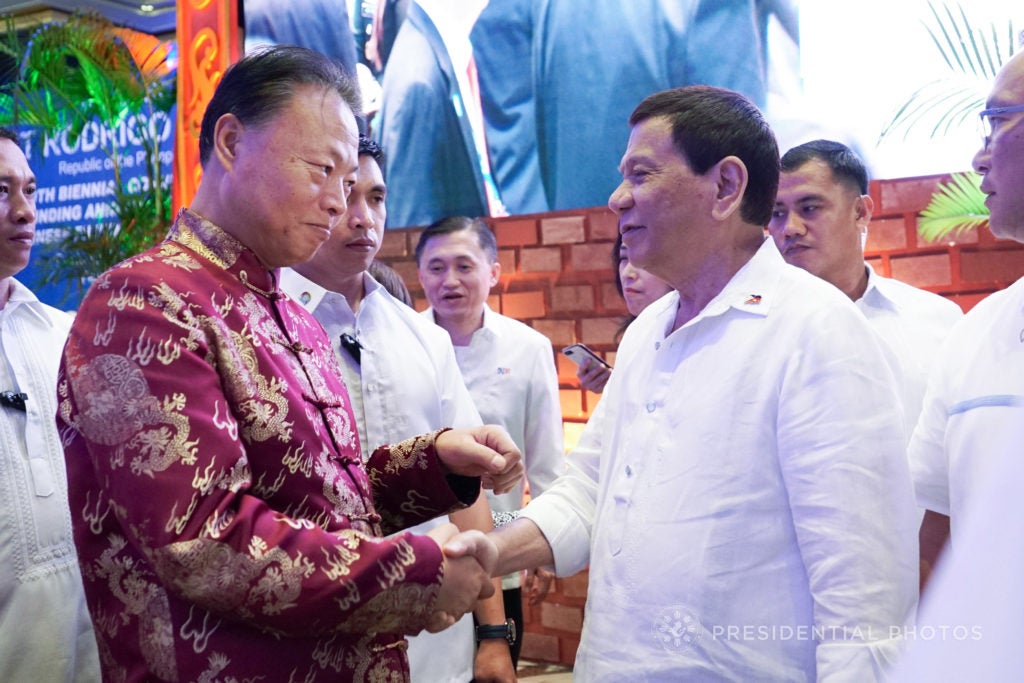 Opposition lawmakers were aghast on Tuesday at President Rodrigo Duterte’s joke about making the Philippines a province of China, calling the chief executive’s comment a “slap in the face” of Filipino troops defending the country’s sovereignty in its territory in the South China Sea.

Former Solicitor General Florin Hilbay, who helped bring the Philippines’ challenge to China’s claim to nearly all of the South China Sea before the UN-backed Permanent Court of Arbitration in The Hague, also slammed Mr. Duterte for the joke, calling it “unbelievable” and in no way could be considered funny.

Even Communist Party of the Philippines founder Jose Maria Sison rejected Mr. Duterte’s statements to a gathering of Chinese-Filipino businessmen on Monday night, calling the President “a stupid guy who is a bloody bully to his own poor countrymen but an abject puppet and a coward to foreign interests.”

Speaking at the 10th biennial convention and 20th founding anniversary of the Chinese-Filipino Business Club Inc. on Monday night, Mr. Duterte took note of criticism that he was not doing enough to defend the Philippines against China, whose sweeping claim to the South China Sea was invalidated by the Hague arbitral court in 2016.

He said Chinese President Xi Jinping himself had promised to him that China would not build anything on Panatag Shoal, a resource-rich fishing ground internationally known as Scarborough Shoal that China grabbed from the Philippines after a two-month maritime standoff in 2012, prompting Manila to go to the arbitral court.

Mr. Duterte said people should believe Xi’s promise, as the Chinese leader was a “man of honor.”

Then he joked that China should turn the Philippines into one of its provinces and leave Taiwan, which China considers a renegade province, alone.

Chinese Ambassador to the Philippines Zhao Jianhua was in the audience.

Despite that joke, presidential spokesperson Harry Roque said on Tuesday that Mr. Duterte was quite clear in his assertion of Philippine sovereignty in the West Philippine Sea—waters within the country’s 370-kilometer exclusive economic zone in the South China Sea—and in Philippine Rise, a vast undersea plateau off the eastern coast of the country rich in biodiversity and tuna.

“[H]is joke is, you know, it’s just to emphasize that it’s ours but we’re one with China. Take it in that spirit,” Roque said.

“Such irresponsible banter is a slap in the face of the many Filipinos who work tirelessly to defend our territorial integrity [against] China. This only shows how indifferent and apathetic Duterte is to China’s bastardization of our sovereignty,” Alejano said.

“It’s unbelievable. There’s no way by which you can consider that joke funny,” said Hilbay, a member of the Philippine legal team that argued the country’s arbitration case in the Hague court.

“There is no doubt that a person who is a leader of a country consider his statements—whether serious or not—would have serious implications, especially on a very serious matter such as the protection of our national territory,” he said.

Sison, in a statement sent from the Netherlands, said Mr. Duterte’s assertion of sovereignty in the West Philippine Sea was just “ek-ek” (drama) and accused the President of being a “dictator and bully” to Filipinos but a “traitor and coward” when it came to China.

At the DFA gates, the Akbayan protesters issued a statement saying Mr. Duterte’s “absurd jest” showed that he had “already sold our resources to China.”

In the House of Representatives, Alejano said Mr. Duterte’s comment was particularly alarming in light of China’s increasingly confrontational maneuvers in the West Philippine Sea.

The former Navy captain cited information from sources he did not identify that a Philippine Navy ship conducting regular troop rotation and mission in the Spratly island chain had sighted a Chinese vessel lurking approximately 7 km off the Philippine-owned Pag-asa Island.

He said the Chinese vessels proceeded to form a semicircle formation around Pag-asa in what appeared to be a “cabbage strategy” to control a specific area.

“Meanwhile, the Chinese Coast Guard and Navy vessels closed in and shadowed the Philippine Navy ship for as close as [4 km] northwest of Pag-asa Island, near the sandbars,” he said.

“The quick response of Chinese vessels upon the arrival of our Navy ship on Pag-asa Island suggests that they are permanently stationed nearby,” Alejano said.

“We could infer that the reclaimed areas by China in the West Philippine Sea, particularly [Zamora] Reef, are being used as forward operating bases. Again, confirming the militarization in the disputed waters,” he added.

“The rapid militarization of the West Philippine Sea, lack of formal and transparent protests by our government, the reported Chinese-Philippine resource ventures—all of these point to a passive and subservient strategy by the administration,” he said.

“The President should be reminded that our territorial integrity and sovereignty are issues that should never be joked about,” he added.

Akbayan Rep. Tom Villarin said: “The joke is on us if we don’t call him out for such irresponsible statements.”

“It’s becoming a habit of the President to defer always to the wishes of China and such joke manifests his willful subservience at the expense of our sovereignty,” he said.

“With him as President, we will become inutile to assert our rights even through diplomacy and will be sold to China for a pittance,” he added. —With reports from Leila B. Salaverria, Jhesset O. Enano, Matthew Reysio-Cruz and Delfin T. Mallari Jr.