Abuse or unemployment: Stark choice for many Filipino maids 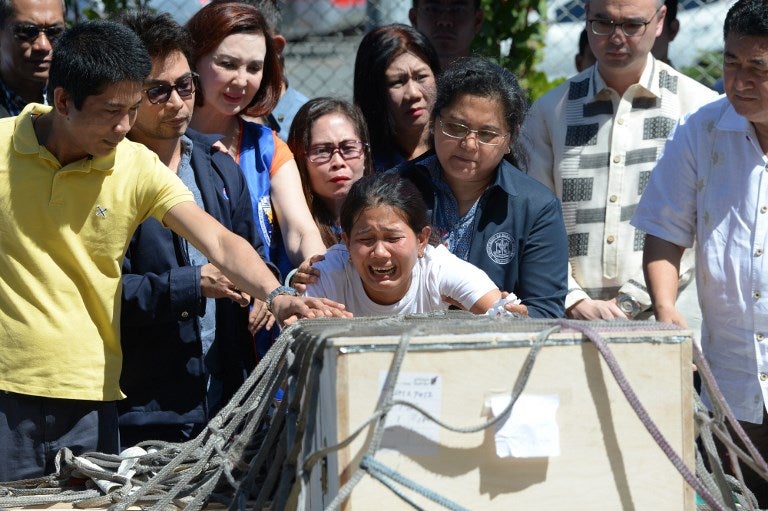 Jessica (C), sister of Filipina worker Joanna Demafelis whose body was found inside a freezer in Kuwait, cries in front of a wooden casket containing her sisterm’s body shortly after its arrival at the international airport in Manila on February 16, 2018, while another sibling Jojit (L-yellow shirt) and Philippine Foreign Secretary Alan Peter Cayetano (2nd R) look on.
The Philippines on February 12 expanded a ban on its citizens working in Kuwait after President Rodrigo Duterte angrily lashed out at the Gulf state over reports of Filipino workers suffering abuse and exploitation. Authorities say 252,000 Filipinos work in Kuwait, many as maids, yet domestic workers there are not covered by ordinary labour legislation. / AFP PHOTO / TED ALJIBE

After the murder of a Filipino maid in Kuwait, domestic helpers are streaming back to Manila with tales of abusive employers — but many are still prepared to take their chances overseas again.

For them, the sometimes brutal conditions and the hide-and-seek with Kuwaiti police are outweighed by the need to provide for their families at home.

“The mother of my boss, she would hurt me, she would hit me with a shoe with a thick sole. My body was bruised but I would not [go home],” said Marissa Dalot, 40, who labored for almost five years in the wealthy Gulf state.

“I did not want to go home. I wanted to continue working because my kids were still in school,” said Dalot, who finally decided to fly home over the weekend.

In all, some 10 million Filipinos work overseas in a wide variety of jobs and their cash remittances, which the Bangko Sentral ng Pilipinas says totaled over $28 billion last year, are a major contributor to the Philippine economy.

But the issue of domestic helpers in Kuwait came into sharp focus with the death of Joanna Demafelis, whose body was found stuffed in a freezer.

A visibly angry President Rodrigo Duterte has alleged that Arab employers routinely rape their Filipino maids, force them to work 21 hours a day and feed them scraps.

Some 252,000 Filipinos work in Kuwait, many as maids, with reports of widespread abuse and exploitation.

“When will this inhuman treatment of these Filipino workers end?” Mr. Duterte said.

He has banned the deployment of new workers to Kuwait as his Cabinet members seek additional legal protection for those already there.

Domestic helpers who want to leave are being flown home for free.

One of them returning over the weekend was Michelle Obedencio, 34, who said she also suffered at the hands of her employer.

After two years she ran away and worked illegally in a beauty salon, where she was treated better—even if she had to dodge the police.

Despite the hardships and risks overseas, she is willing to give it another chance.

“If there is no stable job here [in the Philippines], and if there is someone who will take me, I would go back. I have three kids in school, the oldest in college,” said Obedencio, who labored six years in Kuwait.

“My husband has no job so I really must make an effort to go out [of the Philippines]: If not in Kuwait, someplace else.”

About 1,700 workers have come home under Mr. Duterte’s repatriation program so far, the government said.

Some have been persuaded to leave by a Kuwaiti government amnesty for illegal workers, which allows them to depart without penalty until Feb. 22.

But those headed home may have little to show for their labor. Many of the returning women who spoke to Agence France-Presse over the weekend in Manila said they had no personal savings.

The money they earned over the years had already been sent back home. Some said they had only been getting about 80 Kuwaiti dinars ($267) a month, which went to pay household expenses and school tuition in the Philippines.

Filipino workers are attracted overseas by salaries unavailable at home, where even skilled workers like computer engineers earn only about P49,300 a month, according to government figures.

Overseas workers are widely hailed as national heroes for their contribution to the economy, and reports of their mistreatment abroad often become a political issue domestically.

Loreza Tagle, 37, said she had been overworked and underfed by her employer. She labored illegally in a restaurant for five years to support her four children and her poorly paid husband back home.

But as she pondered an uncertain fate after leaving Kuwait, tears welled up in her eyes.

“It is frightening to come back to the Philippines with no guarantee of finding a job,” she said through sobs.

“Over there, no matter what, even if you are in fear of getting caught by the police, somehow you can find a job … over here, you may not be afraid but you won’t have a job.”

Read Next
Duterte not ‘trading away too much, too soon’ with China – Roque
EDITORS' PICK
Solon bats for extension of current school year to July 2021
Smart widens gap vs competition on 4G availability, wins Opensignal’s first 4G Coverage Experience award
The Grand Midori Ortigas: Zen oasis in the city
Gov’t eyes use of P73.2 billion in loans to buy COVID-19 vaccines for 60 million people
DOH chief warns of possible uptick in COVID-19 cases after holidays
Filipinos to experience TECNO Mobile’s bolder Spark 6
MOST READ
Former ABS-CBN ‘Sky Patrol’ Ricky Velasco passes away
US donates $18M worth of weapons system to PH to fight terrorism
PBA to probe ‘luto’ claim against referee, Hugnatan denies accusation
I can’t probe House members getting kickbacks; I have no jurisdiction – Duterte
Don't miss out on the latest news and information.