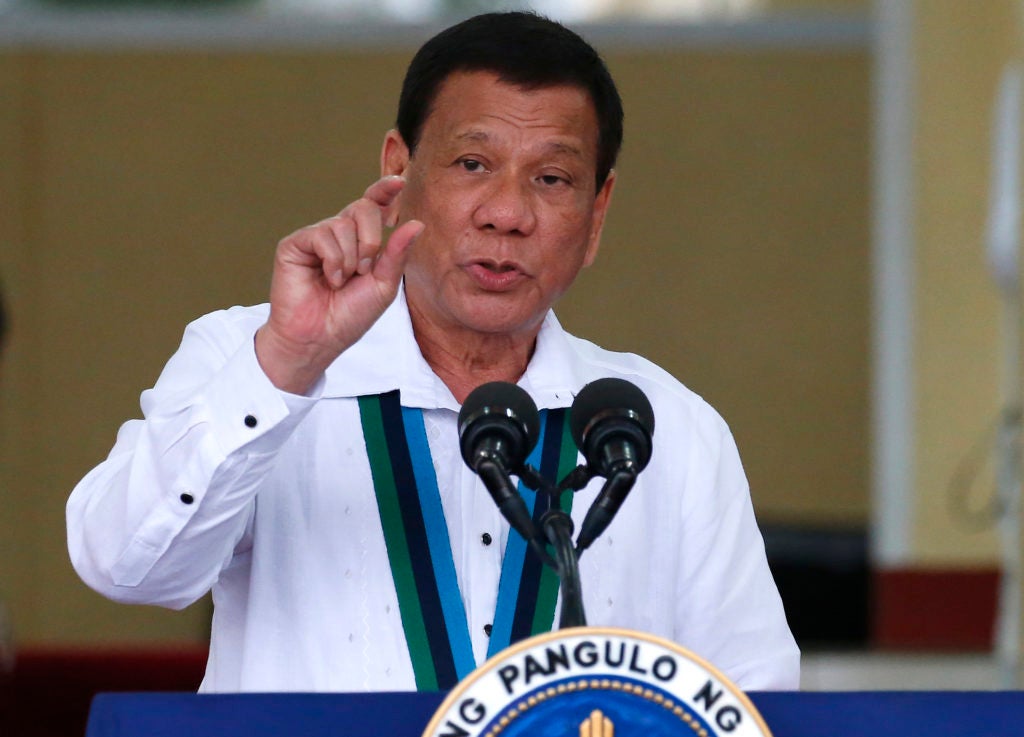 President Rodrigo Duterte asserted in a speech he made on Monday the sovereign rights of the Philippines over the disputed parts of the South China Sea in front of Chinese businessmen and Chinese Ambassador to the Philippines Zhao Jianhua.

He made his speech at a joint event – the 10th Biennial National Convention and 20th Founding Anniversary Celebration of the Chinese Filipino Business Club, Inc. (CFBCI) – which was also attended by Zhao.

“I am ready, to put my presidency, my career as President, my life and honor [on the line]. Atin ‘yan. I have stated it in black and blue [sic – he probably meant white – Ed.]. It has been the claim of the Republic of the Philippines na atin ‘yan… which we called before the [South] China Sea, now the West Philippine Sea,” he said in a speech he made on Monday at the Fiesta Pavilion of the Manila Hotel.

But the President insisted that the Philippines could only be “diplomatic” in dealing with the country’s maritime dispute with China in the South China Sea.

Duterte said the Philippines would continue to insist its claim in the disputed waterway but reiterated that Manila could not go to war with Beijing.

“Well, we can only be diplomatic. We can only be talking on friendly and civilized terms,” Duterte said. “We cannot go there, ride in our whatever, Navy, the gray ships, the Coast Guard and start waving our rifles. We cannot do that today. It is unrealistic. It cannot be true.”

He said he would not commit the lives of Filipinos to a war against a powerful neighbor.

“Then why would I go there, bring my Navy, my soldiers, my police and everything only to be slaughtered?” he said “I will not commit the lives of the Filipinos only to die unnecessarily. I will not go into a battle which I can never win. We cannot do that today. It is unrealistic.”

Duterte has been slammed by critics for his soft stance on China. But the President blamed the previous administration, which was headed by President Benigno Aquino III.

“The critics say that I am not doing enough,” he said. “What were they [previous officials] doing during their time? Why did they not start to build things there, structures that China is doing now?” he said.

“So even in the claim itself and in the development of that claim, wala tayong ginawa,” he added, referring to the time when China was just starting building military installations in the disputed sea during the administration.

Duterte said the military installations in the disputed islands were not intended for the Philippines but for the United States.

“Now, nandiyan ang China building structures and military bases. I must admit it. But is it intended for us? You must be joking,” he said.

“It’s not intended for us. The contending ideological powers of the world or the geopolitics has greatly changed. It’s really intended against those who the Chinese think would destroy them. And that is America,” he added.

He said China was willing to talk over the maritime row, citing the ongoing bilateral consultative meetings Manila and Beijing had conducted.

“Why will I fight? China is willing to talk,” he said. /atm

Read Next
Nabbed Tunisian says police ‘forced’ him to say he’s from ISIS
EDITORS' PICK
House energy committee chair Arroyo bats for cheap electricity
Lawmakers eyeing more changes in Maharlika plan
Hidilyn Diaz wins only gold missing from her collection
Shop smarter with vivo’s big 12.12 holiday deals
How not to retire as an ex-president
The vivo Y02 is now available in the Philippines for only PHP 5,299
MOST READ
Jovit Baldivino, ‘Pilipinas Got Talent’ winner, dies at 29
LPA enters PAR, to likely strengthen into tropical depression in coming days – Pagasa
Andi Eigenmann, family in Manila for a quick visit; Ellie dines with grandma Jaclyn Jose
Lawmakers eyeing more changes in Maharlika plan
Don't miss out on the latest news and information.