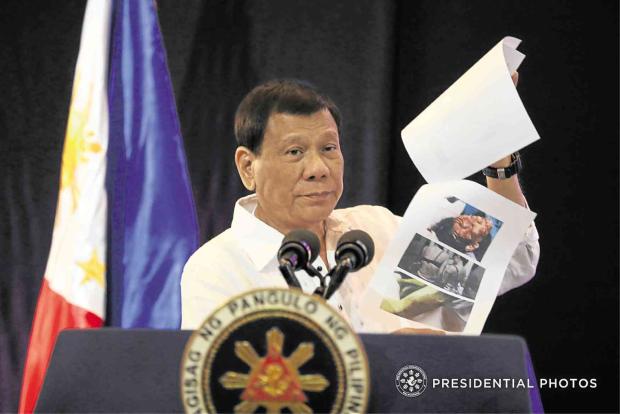 An irate President Rodrigo Duterte shows photos of Filipino workers who were reportedly abused in Kuwait during his speech at the Marco Polo Hotel in Davao City on Friday, Feb. 9, 2018. (Photo from Malacañang)

Foreign Minister Sheikh Sabah al-Khalid al-Sabah suggested that Duterte could damage the ties between Kuwait and the Philippines, adding that the line for cooperation was open.

“We actually condemn the statements of the president of the Philippines,” Sabah al-Khalid said.

“You know we are communicating with the president of the Philippines and with the minister of foreign affairs of Philippines to try and explain the conditions of work of all Philippines workers.”

Some 300 migrant workers arrived in Manila from Kuwait on Monday after Duterte requested commercial airlines to provide flights for distressed OFWs.

Duterte halted the deployment of Filipino workers to Kuwait last month after reports that abuse by employers drove several migrants to commit suicide.

The Philippine government is preparing to repatriate as many as 10,000 who have overstayed their work permits in Kuwait.

“This escalation will not serve the interests of either Kuwait or the Philippines,” the foreign minister said, adding that the “only solution is to cooperate and collaborate on the details of the very sad and unfortunate events that happened.”

The official expressed hope the two counties could resolve the issue to increase the number of Filipinos working in Kuwait, whom the minister described as “community that makes less problems.” /atm