Duterte to ICC: Why start with me? | Global News
Close
menu
search

Duterte to ICC: Why start with me? 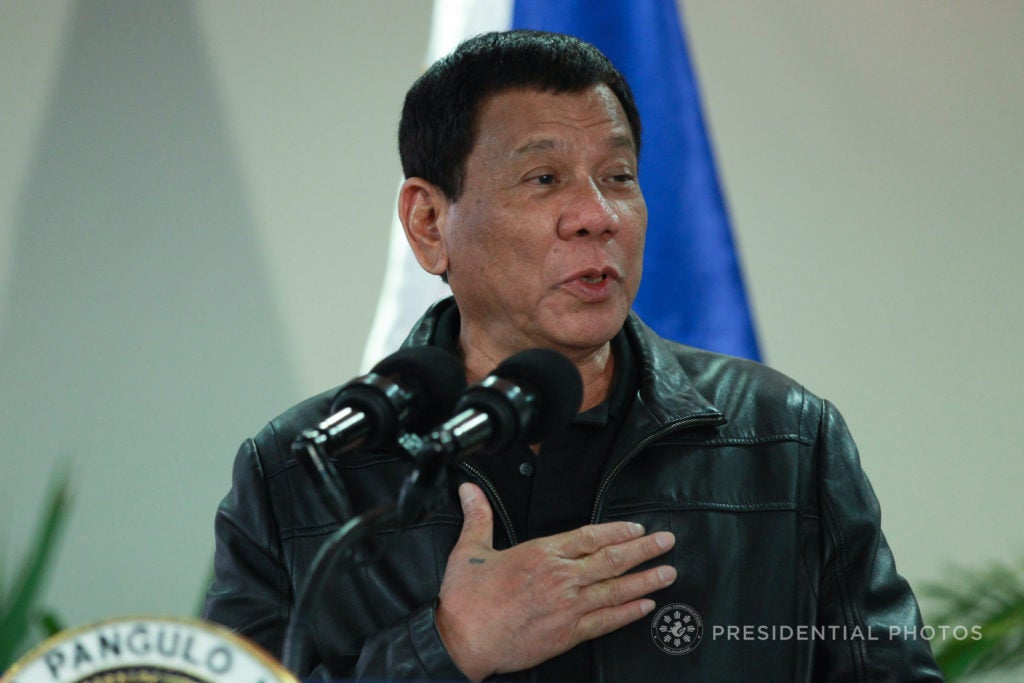 Why start with me?

President Duterte on Friday night said International Criminal Court (ICC) Prosecutor Fatou Bensouda should explain why she decided to investigate him when there were other countries in Asia where “massacres” were happening.

“There are many massacres there now in all parts of Asia and yet you people want to go after me. You better clear that up because I will withdraw from the ICC,” the President said in a speech in Davao City.

The ICC was acting on the complaint filed by lawyer Jude Josue Sabio in April 2017 against Mr. Duterte and 11 senior officials that said crimes against humanity were being committed “repeatedly, unchangingly and continuously,” and killing drug suspects and other criminals had become “best practice.”

Sabio is the lawyer for confessed Davao Death Squad hit man Edgar Matobato who had testified in the Senate on alleged Duterte-instigated killings of suspected drug offenders and other criminals when the President was mayor of Davao City.

In a statement on Thursday, Bensouda said she was opening a “preliminary examination” of the complaint, citing allegations that thousands were killed for their alleged involvement in the drug trade, many of them extrajudicially.

She said she decided to open the examination after “a careful, independent and impartial review” of the situation in the Philippines.

The Philippine probe is the ICC’s first preliminary examination in a Southeast Asian nation.

Mr. Duterte said the ICC treaty provisions that dealt with extrajudicial killings were not published in the country, as required by Philippine law, and so they could not be implemented here.

The President was referring to the Rome Statute that established the ICC, which was ratified by the country in 2011.

“There is no fucking provision of extrajudicial killing. It is not found anywhere. How can you accuse me when the law says the treaty we entered into forms part of the laws of the land,” he said.

Mr. Duterte, a lawyer and former prosecutor, said any penal statute required publication to be enforceable. “Was there any publication? None,” he said.

He also said he never ordered authorities to kill anyone. “I just told them to destroy the apparatus (of the drug trade),” he said.

If the ICC found him guilty, the President said he would rather be shot by a firing squad than be imprisoned.

“I welcome you and, if you want to find me guilty, go ahead, so be it. Find a country where they kill people with a firing squad. I am ready,” he said.

As early as October 2016, Bensouda served notice to the Duterte administration that she was “closely” monitoring the killings related to the war on drugs and expressed alarm that officials were condoning them.

Earlier, presidential spokesperson Harry Roque told reporters the President was confident the ICC would not reach the formal investigation stage because it would find no basis for the complaint.

Roque said the most that Alston recommended then was a “criminal charge for simple negligence against the police.”

“So, the President said that if the conclusion of the UN special rapporteur was that the police was only liable for simple negligence, he is very confident that the (ICC) prosecutor therefore will not go beyond a preliminary examination and he is confident that at most, what could be the finding would be similar to the finding of Philip Alston,” Roque said.

The Office of the Solicitor General (OSG) and the Philippine Embassy in The Hague, which received notice of Bensouda’s probe, joined Roque in saying the ICC had no jurisdiction over the Philippines at this time since the country’s courts, which could try the President for any crime, were functioning.

OSG spokesperson Erik Dy said in a statement that the ICC “cannot replace our national courts.”

Dy pointed out that individuals questioning the legality of the drug war had brought the issue before the Supreme Court.

“There are adequate laws and remedies in our country to address the issue of alleged extrajudicial killings,” Dy said. “This negates the need for the ICC to take cognizance of the matter.”

However, Dy failed to mention that Mr. Duterte was the subject of Sabio’s complaint, not his take-no-prisoners strategy against the drug menace.

As an incumbent President, Mr. Duterte also could not be charged in a criminal case.

The Philippine Embassy in The Hague said the administration had no policy to target innocent civilians.

“We are certain, however, that this will prove to be a wake-up call for the ICC that it has utterly no jurisdiction over the Philippines under the circumstances,” it said. —WITH REPORTS FROM INQUIRER RESEARCH, AFP AND ALLAN NAWAL