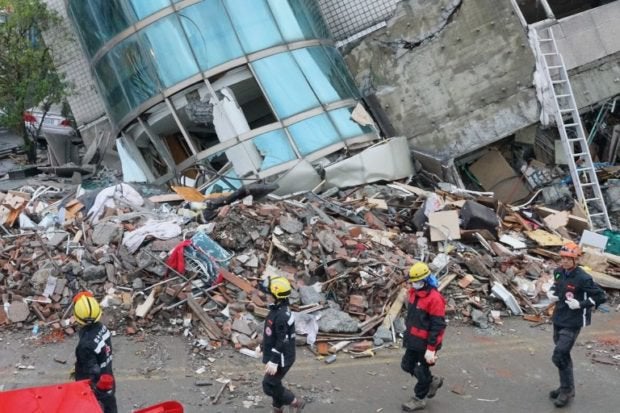 Rescuers walk past a collapsed building in Hualien on February 8, 2018 after the city was hit by a 6.4-magnitude quake late on February 6.
Taiwanese rescuers continued the terrifying task on February 8 of searching for survivors in a dangerously leaning apartment block that was partially toppled by an earthquake, despite regular aftershocks coursing through the building’s tottering structure. AFP

The body of Melody Albano Castro, the overseas Filipino worker (OFW) who went missing after a magnitude 6.4 quake hit Taiwan, has finally been found in a collapsed building in Hualien.

Castro, 28, a caregiver, was found dead in a wrecked building at 5:45 p.m. on Thursday, Manila Economic and Cultural Office (MECO) chairman Lito Banayo said in an interview with ANC.

“The body of Melody Albano Castro was found in the wreckage of a building in Hualien, Taiwan,” Banayo said in the television interview. “Unfortunately, she was not able to survive the earthquake in Hualien.”