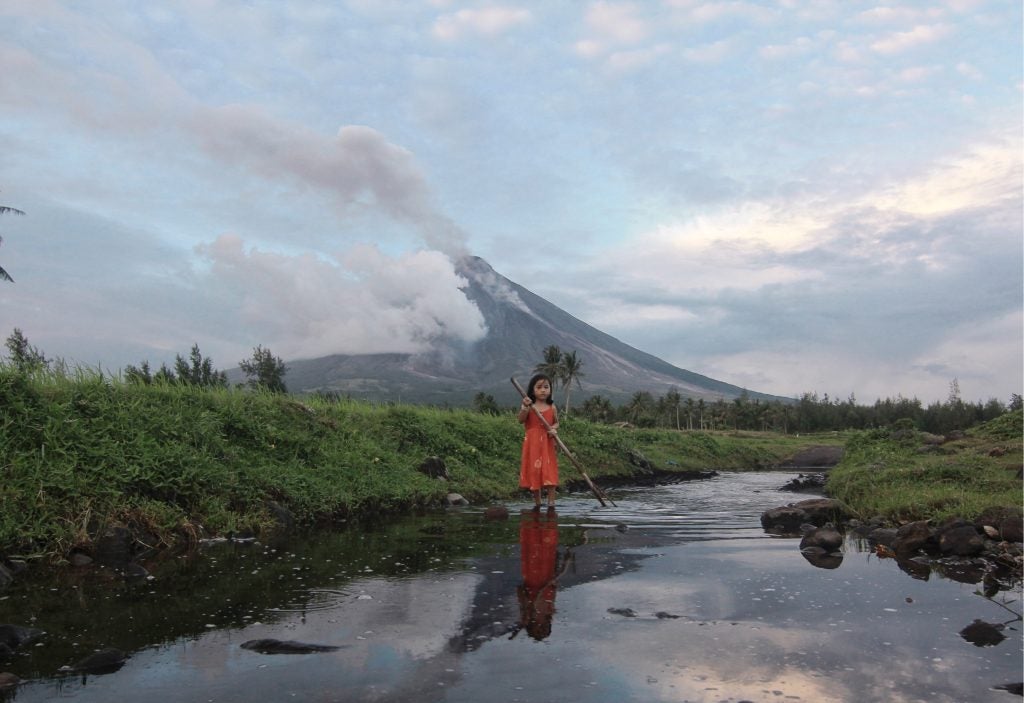 A child plays in the river in Barangay Busay, Daraga, Albay, with Mayon Volcano in the background. INQUIRER PHOTO/GEORGE GIO BRONDIAL/INQUIRER SOUTHERN LUZON

Han said the donations are for the 20,000 displaced families who are also facing health risks due to the volcanic ashes.

“On behalf of the Government of the Republic of Korea, I would like to express my sympathies to all the communities affected by the eruption of Mayon Volcano in Albay Province,” the ambassador said.

“Korea will always appreciate the support that the Philippines have given during the Korean War. As a friend to Filipinos, therefore, Korea is committed to providing the necessary assistance in this time of need,” he added.

Gordon, in turn, commended the Korean Embassy for their continuous support to PRC’s movement to “alleviate the suffering of the most vulnerable.”

“This timely donation will not only augment the PRC’s capacity, but is also a great contribution in providing hope to thousands of families affected by Mayon’s volcanic activities,” Gordon said in a statement.

Gordon said the donations will be used to purchase hygiene kits, provide clean and potable water and construct more comfort rooms for thousands of evacuees at the 59 evacuation centers.

The PRC has also provided hygiene and sleeping kits to 1,900 families, hot meals to some 3,800 individuals and psychosocial support to around 12,000 people. /je

Read Next
Gov’t gave no ‘preferential treatment’ to China on PH Rise research – Esperon
EDITORS' PICK
Taal Volcano flexes signs of restiveness anew
SM continues to send relief assistance to remote towns in Batangas
Get exciting deals and discounts when you download the new McDonald’s App
China expands lockdowns to 25M people to halt viral outbreak
DOH: Second person ‘under investigation’ for 2019-nCoV in Tacloban City
‘A greener, cleaner tomorrow’: A how-to guide for Filipinos who want to help with today’s energy crisis
MOST READ
PH to ‘start process’ of VFA termination — Locsin
172 Chinese tourists arrive in Bohol
Lacson on Duterte’s threat to end VFA over Bato’s canceled visa: Where is the connection?
DOH: Second person ‘under investigation’ for 2019-nCoV in Tacloban City
Don't miss out on the latest news and information.