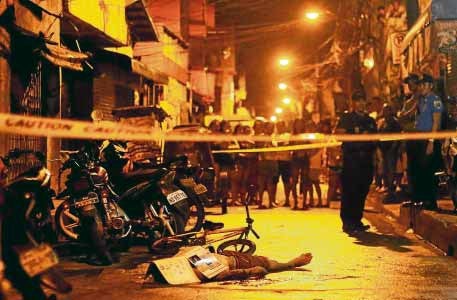 The United States is “cautiously optimistic” that the Philippines’ human rights record is improving as President Duterte presses on with his bloody war on drugs that has claimed thousands of lives, a senior US drug official said on Tuesday.

The London-based Amnesty International, however, is urging the Philippine government to hold police officers accountable for the “unlawful killings” in the war on drugs.

But the current administration of President Donald Trump has been noticeably less critical.

In a telephone briefing with reporters on Tuesday, James A. Walsh, a senior drug official in the US State Department, said there were signs of fewer extrajudicial killings (EJKs).

“Many folks have been tracking the EJKs in the Philippines and the trends are going down so there is some encouragement that we are seeing in some of our human rights training working,” said the deputy assistant secretary for international narcotics and law enforcement.

“I would describe the United States as being cautiously optimistic in the trends when it comes to a good … appropriate way for a drug campaign,” he added.

Malacañang on Wednesday hailed the more positive US outlook on the war on drugs, saying it expected a fresh police crackdown on narcotics to result in fewer deaths.

Roque said EJKs would never have a place in the Duterte administration’s drive to rid the country of illegal drugs.

Press Secretary Martin Andanar denied there were EJKs in the drug war.

“While we welcome US state department senior official James Walsh’s ‘cautiously optimistic’ view of President Duterte’s successful anti-illegal drugs campaign, we maintain that there are no EJKs under the Duterte administration,” Andanar said in a statement.

He said, however, that the PNP’s cautious approach to the drug problem this time was adopted for the benefit of the Filipinos, not for the approval of the United States or the European Union.

“We are not acting to please the Americans, the Europeans. No. We want to give justice and the proper treatment to ordinary Filipinos,” Dela Rosa said.

The PNP says 3,987 drug suspects have been killed by law enforcement in the drug war.

But human rights groups charge that thousands more have been murdered by shadowy vigilantes in what they say could be a crime against humanity.

James Gomez, Amnesty director for Southeast Asia and the Pacific, on Tuesday said the police had “unlawfully killed thousands of people, the vast majority of them from poor and marginalized communities, in attacks so extensive and brutal they may well amount to crimes against humanity” since Mr. Duterte assumed power in 2016.

“Now that police are once more returning to the forefront of antidrug operations, the government must make sure that there is no repeat of the bloodshed during the past 18 months,” Gomez said in a statement a day after the PNP relaunched “Oplan Tokhang,” an antinarcotics operation where police visit users and pushers in their homes to talk them into surrendering.

The program had been suspended twice, most recently last October after narcs kidnapped and murdered a South Korean businessman on the grounds of the PNP headquarters at Camp Crame in Quezon City.

According to Gomez, “the police have been allowed to operate in a culture of almost total impunity” under the Duterte administration.

“It is a positive step by the Department of Justice to file murder charges against three police officers accused of killing Kian Loyd delos Santos, the teenager whose death is emblematic of the horrors of the war on drugs. But independent investigations must cover each of the thousands of other unlawful killings, and all perpetrators, including those in positions of command, must be held to account,” Gomez said. —Reports from Jhesset O. Enano, Nestor Corrales, Leila B. Salaverria and AFP