Duterte eyes India arms, gets $1.2B in investment pledges 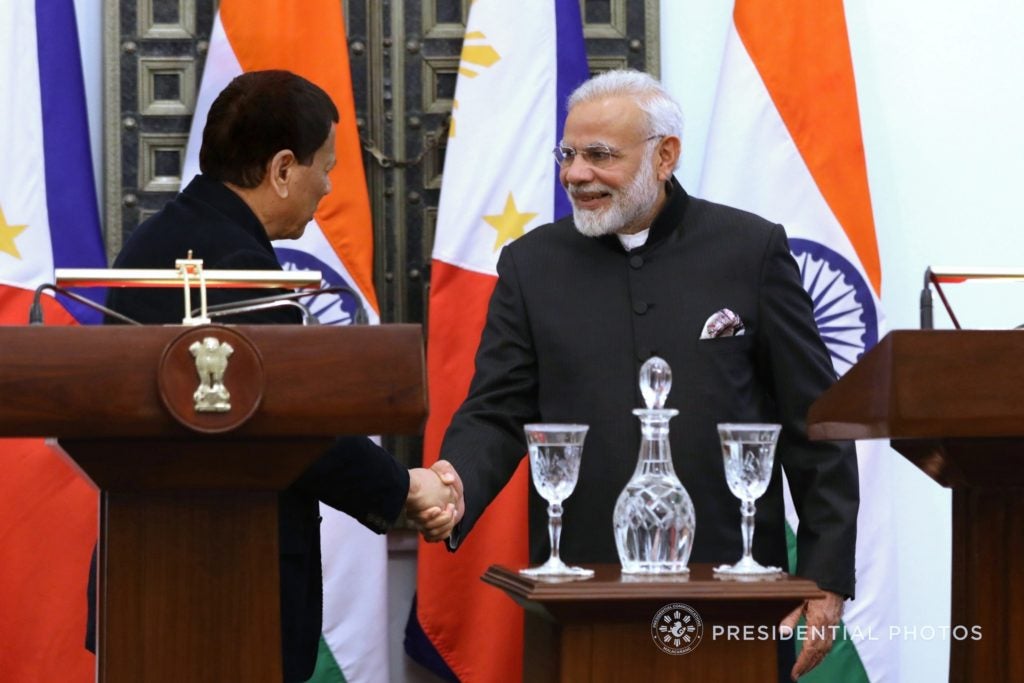 NEW DELHI—Top Indian conglomerates pledged about $1.25 billion worth of investments even as the Philippines considered acquiring weapons and warships from India.

The conglomerates made the pledge on the sidelines of President Duterte’s attendance at a regional summit with Indian and Association of Southeast Asian Nations (Asean) leaders.

Upon arriving here on Wednesday for the India-Asean Commemorative Summit, the Philippine leader sat down with Indian Prime Minister Narendra Modi for an hour to discuss economic and political ties between their countries as well as the possibility of a military cooperation.

Mr. Duterte told Modi on Thursday that the Philippines was interested in Indian military hardware.

“There was a commitment, in fact, for the Philippines

Asked after the briefing to elaborate, Roque said the issue came up when Modi broached his country’s capability in producing weapons.

“The prime minister said they have expertise in ships and other military hardware, so President Duterte manifested that in the same way he has decided to purchase weapons from China and Russia, he will also consider purchasing Indian weapons,” he said.

The investments that Indian firms pledged may generate at least 10,000 new jobs in the Philippines.

Trade Secretary Ramon Lopez also said on Thursday that the investment commitments came in the form of seven letters of intent (LOIs) and two memorandums of understanding (MOUs) with “big and major conglomerates” that were keen on entering the Philippine market or expanding their operations there.

Most of the estimated gains will come from the renewable energy sector, particularly Adani Green Energy, which plans to put in $1 billion to build solar and wind power generation projects in the Philippines, Lopez said at a briefing.

“They are the biggest in India,” he said of the firm known for making solar panels. “[T]hey are now looking for sites for the solar and  wind-based power generation.”

Lopez said some 3,000 jobs could be created in the renewable energy sector.

The biggest labor windfall, however, might be in the form of 100,000 new jobs created per year for six years in the IT-business processing management (BPM) industry under agreements signed with Indian companies, Lopez said.

He said an MOU was signed between the National Association of Software and Services Companies of India and the IT Business Processing Association of the Philippines (Ibpap).

“This pertains to the development and growth of the global IT-BPM industry in our country so this basically includes mutual assistance and cooperation for the promotion and development of the industry,” Lopez said.

A 50-member Philippine business delegation came with Lopez for the series of meetings with Indian companies ahead of Mr. Duterte’s participation in the India-Asean Commemorative Summit.

During their bilateral discussion, the “two leaders agreed on expanding bilateral ties on all fronts. This includes business as well as security and even military cooperation,”  Roque said in the same briefing.

Mr. Duterte noted the growing business ties between the Philippines and India and “singled out in particular that Indian companies in partnership with Philippine companies won the bidding for two very big airport projects in Cebu as well as in Clark.”

“He called for further cooperation in the pharmaceutical industry as well as in business outsourcing industry,” Roque said.

Roque said Mr. Duterte also thanked India for its support in the rehabilitation of Marawi City, particularly a cash donation of $500,000 for the rebuilding effort.

The two leaders also talked of a possible military relationship between India and Asean to combat terrorism and piracy on the high seas, according to Roque.

Mr. Duterte stressed to Modi that he did not only mean terrorism by religious extremists but also the piracy threat along the Indo-Pacific navigation route straddling several Asean economies.

“Of course, the two heads of state agreed that relations while already very good will even be better and that there will be further bilateral negotiations on issues involving trade and even military cooperation in the next two months,” Roque said. —WITH A REPORT FROM ROY STEPHEN C. CANIVEL