Number of deaths Due to HIV in Asia 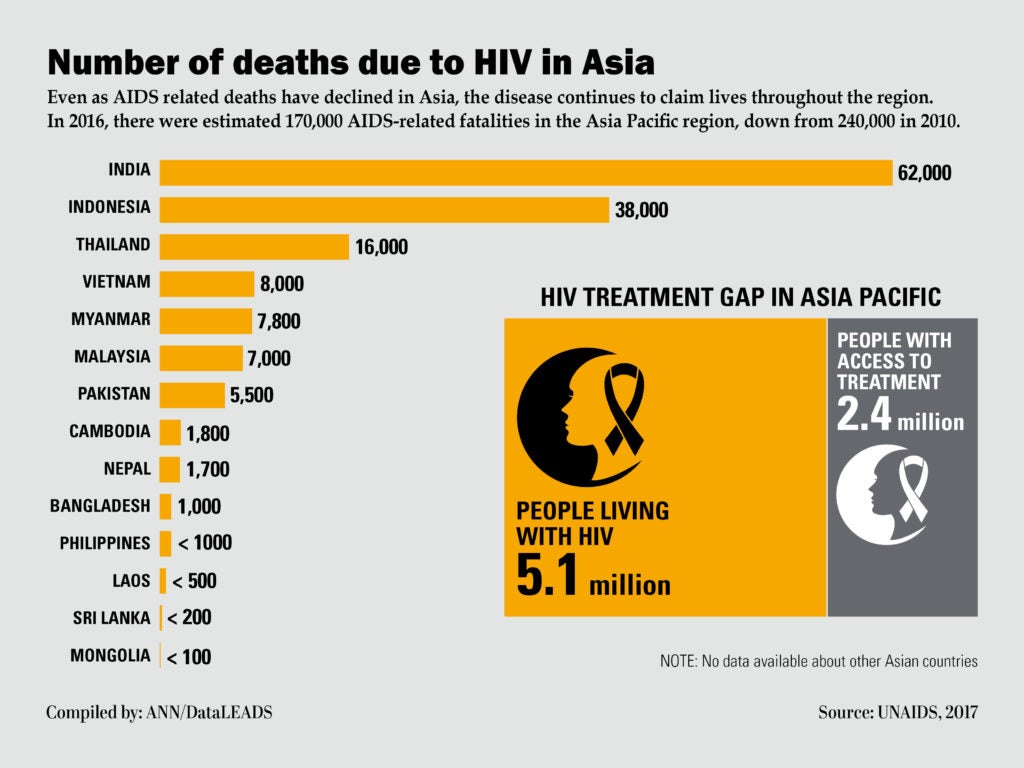 According to the UNAIDS report 2017, an estimated 5.1 million in the Asia Pacific region are living with HIV while  only 2.4 million have access to treatment. Since data on China is not available, India has the highest number of deaths in Asia as per the report. Although the number of deaths due to AIDS has declined significantly, the disease claimed 62,000 people in 2016. India remains the country with the third largest population of people with HIV after South Africa and Nigeria.

In China, the number of people affected by HIV has been estimated at between 430,000 and 1.5 million. However there is no data available in the report about people who died of AIDS-related illnesses.

Indonesia lost 38,000 in 2016 to due to the disease. While the new HIV infections saw a decrease, the country has seen an increase in the number of AIDS related deaths.

Thailand has the third highest AIDS related death rate in Asia. With 16,000 people dying due to the disease in 2016, the country launched a new national strategy in 2017 to end the AIDS epidemic as a public health threat by 2023.

With fourth highest death rate in Asia, 8,000 people died in Vietnam in 2016 due to the disease. The country has seen a steady decline in the number of new infections as well as deaths. Myanmar and Malaysia lost 7,800 and 7,000 people respectively due to the disease in 2016.

Pakistan saw 5,500 people lose their lives due to AIDS in 2016. The number of deaths has been rising steadily along with the number of new infection cases in the country.

In Cambodia and Nepal, the disease took lives of 1800 and 1700 people respectively. Bangladesh lost an estimated 1,000 people in 2016 due to AIDS. There has been a slight increase in the number of new infections as well as number of deaths due to the disease. However, overall Bangladesh remains low HIV-prevalence country.

Philippines and Laos have less than a thousand and five hundred people dying of the disease respectively. Philippines has seen a significant rise in the number of new infections while as the statistics for Laos have not changed much from a last couple of years.

With much lower number of new infections and deaths compared to its South Asian neigbours Sri Lanka has seen less than 200 deaths due to the disease in 2016.

Mongolia has the least number of deaths due to the disease with less than 100 people. The country hasn’t seen a significant change in AIDS related cases since past one decade.

According to the report overall there has been a 39 per cent reduction in AIDS related deaths in the Asia Pacific region.

Read Next
EU parliament to tackle trade perk with PH in February
EDITORS' PICK
KWF has no power to ban, censor written works – Lagman
House energy committee chair Arroyo bats for cheap electricity
Powered by style, innovation and passion
A laptop that maximizes your WiFi so you can maximize your productivity
Why Tagle is a leading papal contender
In Borongan, nuns play hoops (not mahjong)
MOST READ
Why Tagle is a leading papal contender
Arjo Atayde reveals proposal to Maine Mendoza was ‘more than a year’ in the making
My neighbor FVR: From soldier to president
Gilas gets solid core with Clarkson, Sotto planing in
Don't miss out on the latest news and information.