PH defends ‘innocent passage’ of US warship near Panatag 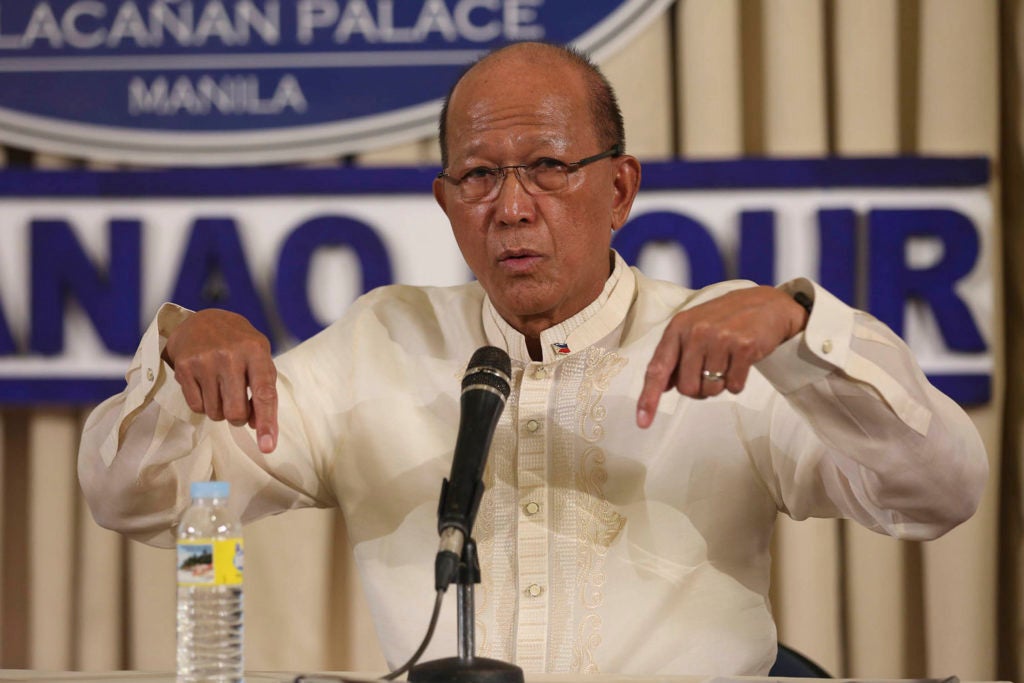 The Philippines’ top defense official on Sunday defended an American warship’s sailing near a disputed shoal in the West Philippine Sea, saying it should not be a cause for concern.

The guided missile USS Hopper came within 22 kilometers of Panatag Shoal on Wednesday night, angering China, which seized the resource-rich fishing ground after a two-month maritime standoff with the Philippines in 2012.

Beijing protested the warship’s passage near the shoal, saying it would take “necessary measures” to protect its sovereignty.

A maritime law professor at the University of the Philippines said the presence of the US warship in the area was legal and that Manila should protest Beijing’s territorial claims.

“No, the presence of US warships in the area is not illegal. USS Hopper was exercising freedom of navigation through [the South China Sea],” said Jay Batongbacal, director of the UP Institute for Maritime Affairs and Law of the Sea.

“[The Philippines] should be concerned about and protest China’s assertion of sovereignty over Scarborough Shoal, and alleged threat to China’s security [on] a reef more than [744 kilometers] away from China’s mainland coast,” he added.

But Malacañang said it did not want to be part of the latest spat between Beijing and Washington.

“We do not wish to be part of a US-China intramural. The United States can take care of its interest,” presidential spokesperson Harry Roque said in a text message.

“The Philippines’ claim over Scarborough Shoal is recognized under our constitutional law and international law,” he said.

Panatag Shoal is seen as a strategic point among the claimants to territory in the South China Sea because it is within easy striking distance of US forces stationed in the Philippines.

A military outpost there could also stop other navies from using a northeast gateway to the area.

The US Embassy in Manila, referring to the “strategic point” description, clarified on Sunday that the US military presence in the area had to do with partnership with the Philippine military.

“[W]e believe that ‘US military personnel partnering with the [Armed Forces of the Philippines]’ is a more accurate description of the role of any US military presence here,” US Embassy spokesperson Molly Koscina said in a statement to the Inquirer.

Besides the Philippines and China, Brunei, Malaysia, Vietnam and Taiwan also claim parts or all of the South China Sea.

After China seized Panatag in 2012, Manila took its territorial dispute with Beijing to the UN-backed Permanent Court of Arbitration in 2013, challenging China’s claim to almost all of the 3.5-million-square-kilometer South China Sea.

In July 2016, the tribunal ruled in favor of the Philippines, declaring China’s sweeping claim invalid and saying it violated the Philippines’ sovereign right to fish and explore for resources in the West Philippine Sea.

China, which did not take part in the arbitration, ignored the ruling and continued to claim the West Philippine Sea as part of its territorial waters.

Instead of asserting the Philippine victory, President Duterte, who came to power in June 2016, chose to mend fences with China in exchange for loans and investments.

Last October, Mr. Duterte said China committed to the Philippines “not to build anything” near Panatag Shoal and Pag-asa Island in the Spratlys.

“China has put it on record that near the Pag-asa where we also have our … the Scarborough island, China has committed to us not to build anything there and I hope that they would honor that commitment to us,” the President said in a press briefing at Davao International Airport.

China continues to occupy Panatag Shoal despite the arbitral ruling in favor of the Philippines.

The Chinese Coast Guard patrols the area, but allows Filipinos to fish outside the shoal’s lagoon.

In a radio interview on Sunday, Roque said China was no longer harassing Filipino fishermen at Panatag Shoal.

“They are not telling us to go away because we are now trying to make friends [with China]. Our fishermen can now make their livelihood there,” Roque said.

“So for us, that is really a problem of America because we have come to a point that we now have an independent foreign policy,” he said, referring to the Chinese protest against the US warship’s passage near Panatag Shoal.

Pag-asa (Thitu) is the biggest island controlled by the Philippines in the disputed Spratly archipelago.

Roque said on Jan. 9 that Manila would consider Beijing having reneged on its commitments only if it built new artificial islands in the South China Sea.

“All I’m saying is that there is still no breach of the good faith obligation for as long as China has not embarked on new reclamations,” he said.

China has built seven artificial islands in the South China Sea, topping some of them with runways and military installations, to bolster its claim to the region.

The United States does not claim territory in the South China Sea but has declared it has a national interest in ensuring that the territorial disputes there are resolved peacefully in accordance with international law.

The US Navy regularly sails through the area to assert freedom of navigation. —With reports from Christine O. Avendaño and AP

Only President Duterte can curse – Roque