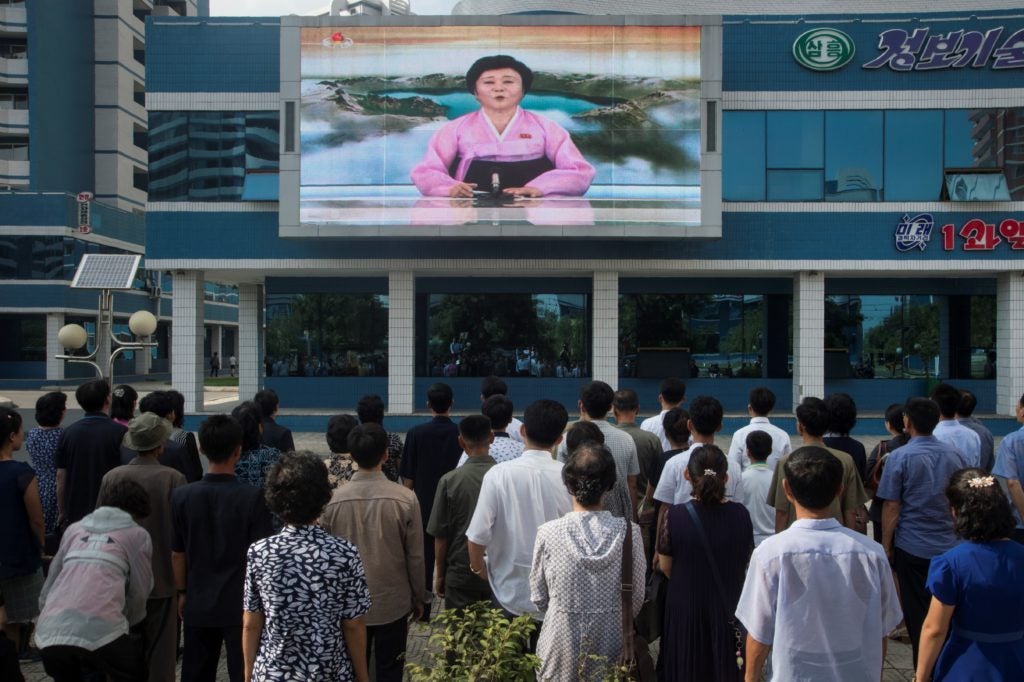 Residents watch a big video screen on Mirae Scientists Street in Pyongyang showing newsreader Ri Chun-Hee as she announces the news that the country has successfully tested a hydrogen bomb on September 3, 2017. AFP FILE PHOTO

Speaking at the first plenary session on the regional security and politics, Vietnamese National Assembly Deputy Chairman Do Ba Ty, also head of the Vietnamese parliamentary delegation, said the Asia-Pacific was facing complicated and unpredictable challenges, ranging from simmering tensions and conflicts to poverty, diseases and the negative impacts of climate change.

In 2017, escalating tension on the Korean peninsula emerged again, creating fears of a war that could break out anytime as North Korea test-fired intercontinental ballistic missiles designed to deliver nuclear weapons and conducted its sixth nuclear test.

The North Korean nuclear crisis became the center of discussion on security in the Asia-Pacific region.

A Canadian member of parliament, Ali Ehssassi, said North Korea was an imminent danger to the world. He said that with missile technology, the country could now fire missiles carrying warheads containing chemical or biological weapons to anywhere in the world and was also very likely to export its missile and nuclear technologies to other countries.

That would subsequently increase the risk of global nuclearization, Ehssassi warned, adding that any military moves by North Korea against its southern neighbor – South Korea – could lead to a military response from the United States and, in the worst scenario, a nuclear war.

Japan’s member of House of Representative Banri Kaieda seconded the concern of the Canadian MP, saying that North Korea’s nuclear program posed a huge threat to its neighbors, including Japan.

Kaieda suggested a ban of nuclear weapons in the Asia-Pacific region based on a similar prohibition – the Treaty of Tlatelolco – established in the Latin America  and the Caribbean following the Cuban missile crisis in the 60s.

“We have always asked North Korea to give up its nuclear program. But we must have a common (denuclearization) framework that all parties can use to convince North Korea to do so,” he said.

The idea by the Japanese MP might pave the way for a universal denuclearization agreement in the Asia-Pacific region after Japan and South Korea themselves refused to sign a United Nations’ treaty to ban such weapons.

The UN Treaty on the Prohibition of Nuclear Weapons – the first of its kind – was signed last September. The ban calls on signatory members  from developing, testing, producing, acquiring, possessing or stockpiling nuclear weapons.

Most US allies, which are protected under the US nuclear umbrella, including Japan and South Korea, refused neither to participate in the talks on the treaty nor to vote for it.

However, the North Korea’s nuclear program constanly keeps Japan on edge. Kieda said that the Latin America’s Treaty of Tlatelolco was an important model the Asia-Pacific could learn from.

“The Asia-Pacific can have its own denuclearization treaty, or an Asian version (of the Tlatelolco treaty),” he said.

As the international community pushes to resolve the Korean crisis, it might be a mistake not to let North Korea participate in an international forum like the APPF,  Russian MP Konstantin Iosifovich Kosachev said.

North Korean delegations attended the most recent meetings of the Inter-Parliamentary Union in Ha Noi in 2015 and in Saint Petersburg in 2017. Such forums, and the APPF alike, Kosachev said, could be the platform for the international community to deliver their messages to the parliament of North Korea.

“I hope that North Korea can make efforts to be a member of us,” he said.