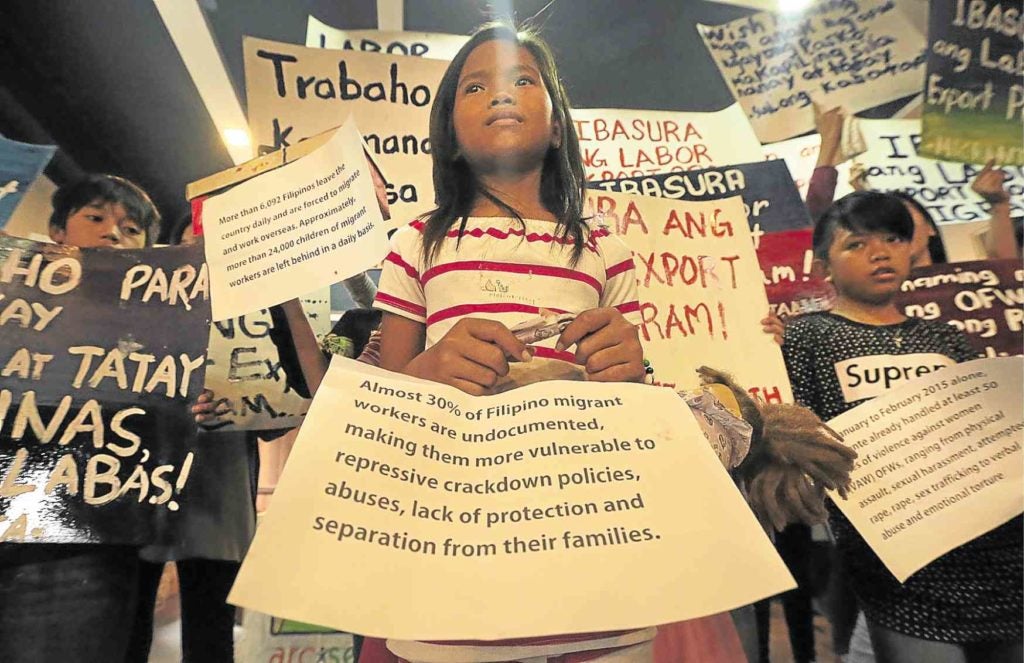 Children of overseas Filipino workers in December present their wish list to President Duterte—for decent jobs in the country so their parents would no longer leave them. —GRIG C. MONTEGRANDE

CAGAYAN DE ORO CITY — Scare tactics were failing to keep women from Northern Mindanao from applying for jobs in countries where abuses against female overseas Filipino workers (OFWs) were rampant, according to a high ranking official of the government agency tasked with the protection of OFWs.

Leonor Mabagal, acting director of the Overseas Workers Welfare Administration (Owwa), said her agency had tried to discourage female job applicants, especially those seeking employment as domestic helpers (DHs), from going to Arab states—Saudi Arabia and Kuwait — and Malaysia, where abuses against women OFWs were commonplace.

Mabagal said Owwa personnel narrate tales of horror to the applicants to dissuade them from proceeding to those countries, but many of the jobless women persisted. She could not provide numbers, though.

“We told them all that we know about working as DH in the Middle East,” said Mabagal.

She said the women were briefed on “migration realities” like culture and behavior of people “and what could possibly happen to them when they reach those countries.”

According to Mabagal, Owwa personnel would even tell applicants that going to those places was like committing suicide.

“We tell them if you want to go to the Middle East and Malaysia to work as DH, it’s like suicide,” said Mabagal.

But many of the jobless women would just shrug off the warnings. “Their usual reply is they’re leaving it all up to luck,” Mabagal said.

“I tell them you’ll be lucky if you are not maltreated,” she said.

Saudi Arabia and Kuwait were among Middle Eastern countries identified by the Department of Foreign Affairs as areas where abuses—rape, maltreatment, nonpayment of salaries and torture—against DHs had been on the rise.

A few Filipino domestic helpers were even killed, with their employers as primary suspects. The employers simply report the cases as suicide and go scot-free.

One such possible case was that of 33-year-old Liezl Trus Hukdong, a mother of two from Bukidnon, who allegedly committed suicide while working as a househelp in Kuwait in December last year.

Hukdong’s relatives said they were not convinced she killed herself. They also expressed indignation when they learned that some of her internal organs were removed, including her eyes, tongue, lungs and kidneys.

“We doubted the cause of her death. They said she committed suicide. But why remove her organs? We want somebody to tell us the truth,” Hukdong’s niece, Grazel Ann, told the Inquirer.

Mabagal said her office always reminded job applicants of the risks they faced as domestic helpers in the Middle East. —Jigger Jerusalem