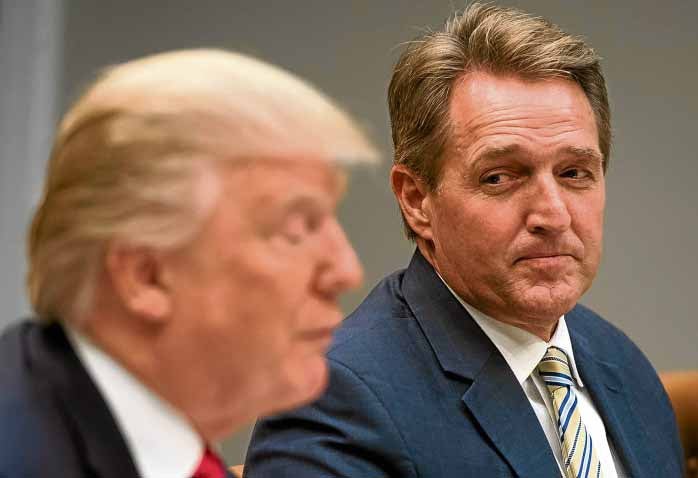 A United States senator from President Donald Trump’s Republican Party on Wednesday lumped the Philippines’ President Duterte with a group of world leaders—led by Trump—who had attacked the press in what the lawmaker said was “authoritarian impulse reasserting itself to challenge free people and free societies everywhere.”

Sen. Jeff Flake of Arizona, in a privilege speech delivered at the US Senate and reprinted in full by international news giant CNN on its website, cited Mr. Duterte among world leaders who had been apparently inspired by Trump in attacking news media and accusing them of propagating “fake news.”

“In the Philippines, President Rodrigo Duterte has complained of being ‘demonized’ by ‘fake news,’” Flake said in his speech.

Flake cited a report about Mr. Duterte, with Trump “laughing by his side” during an Association of Southeast Asian Nations Summit event in Manila last November calling reporters “spies.”

Though it appeared to be a joke by Mr. Duterte, Flake said nothing was funny about the emergence of dictatorial leaders who attacked news media when the truth started to hurt them.

Mr. Duterte’s attack on the Philippine press, according to Flake, ranked among “reports in our free press” that “should raise an alarm.”

The other cases of despots attacking news media for coverage unfavorable to them, according to Flake in his speech, included Syrian dictator Bashar al-Assad.

“In February, Syrian President Bashar Assad brushed aside an Amnesty International report that some 13,000 people had been killed at one of his military prisons by saying, ‘You can forge anything these days, we are living in a fake news era,’”  Flake said.

Flake also cited the case of Venezuelan President Nicolas Maduro, whom he quoted as complaining to a “Russian propaganda outlet that the world media has spread lots of false versions, lots of lies about his country, adding: ‘This is what we call fake news today, isn’t it?”

Flake also cited an unidentified Myanmar official as saying “there is no such thing as Rohingya. It is fake news.”

“Leaders in Singapore, a country known for restricting free speech, have promised ‘fake news’ legislation in the new year. And on and on. This feedback loop is disgraceful,” Flake said.

Appealing to his fellow senators to stand united against attacks on the free press, Flake, quoting Trump’s description of the mainstream press as an “enemy of the people,” said Trump had it “precisely backward.”

“Despotism is the enemy of the people,” Flake said.

“The free press is the despot’s enemy, which makes the free press the guardian of democracy. When a figure in power reflexively calls any press that doesn’t suit him ‘fake news,’ it is that person who should be the figure of suspicion, not the press,” he said.

“No longer can we compound attacks on truth with our silent acquiescence,” he added.

“Respect for freedom of the press has always been one of our most important exports” so when Trump attacks the press, he inspires despots worldwide to do the same, Flake said.

On why purveyors of lies and those who attack the press should not be allowed to thrive, Flake quoted the late US Sen. Daniel Patrick Moynihan: “Everyone is entitled to his own opinion but not to his own facts.” —TONY S. BERGONIA