Five elections to watch in Asia in 2018 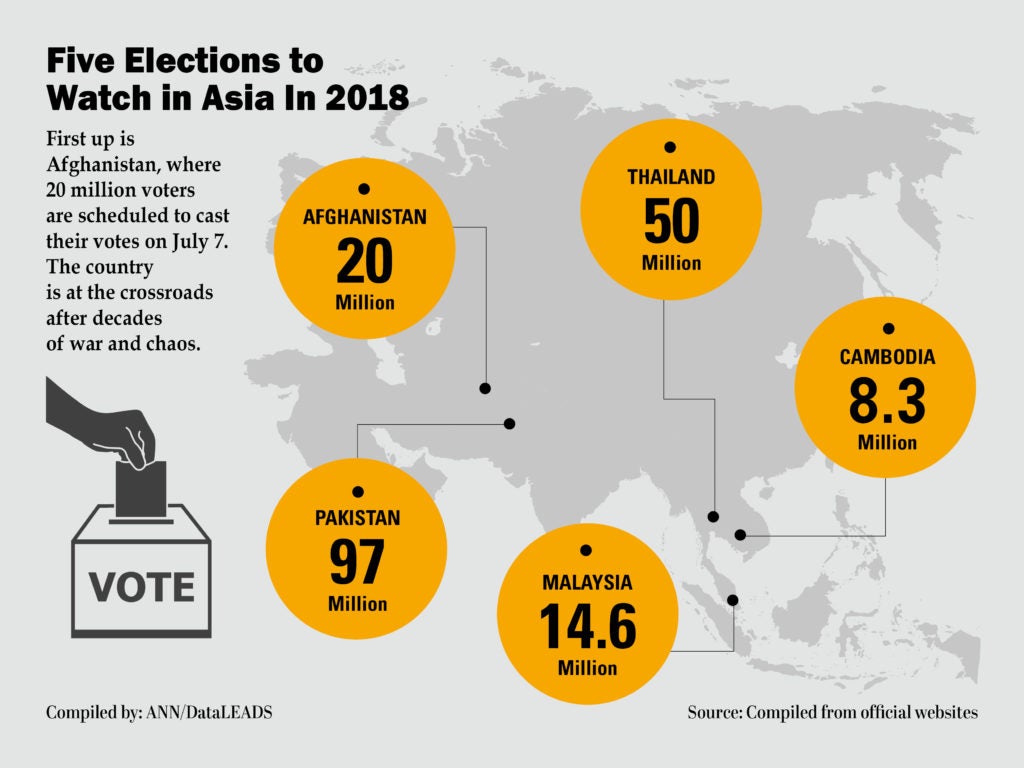 NEW DELHI — Despite relentless Taliban attacks, Afghanistan’s Independent Election Commission is conducting the parliamentary polls in the war-torn country on July 7, almost three years late. Holding free, fair and peaceful elections is a priority as the war-torn country’s last presidential elections saw the top two candidates bickering over who the real winner was. A US led deal finally led to the formulation of the National Unity Government, with Ashraf Ghani as president and Abdullah Abdullah as chief executive officer.

In Pakistan, political parties are making efforts to prepare themselves for next parliamentary elections scheduled to be held on 15 July.  Pakistan’s politics have been in turmoil since Prime Minister Nawaz Sharif was dismissed from power last year on corruption charges. In the current National Assembly, his party, the Pakistan Muslim League holds 189 seats out of total 342, while the opposition Pakistan Peoples Party holds 47 seats. The Pakistan Tehreek-e-Insaf, led by famed cricketer turned politician Imran Khan, holds 33.

The next Asian country with elections on the cards is Cambodia, where the national election are scheduled on July 29. Thirty-five political parties are officially registered, according to Cambodia’s interior ministry. However, the country’s top court dissolved the main opposition Cambodia National Rescue Party last year.  The party’s leader, Kem Sokha, was arrested in September on charges of treason. He remains in detention. Cambodian Prime Minister Hun Sen recently marked 33 years in power. Cambodia’s volatile political situation has contributed to the absence of more than one million eligible voters in the registration. According to the official data, only 536,023 new voters have registered out of 1.6 million estimated new voters. Overall a total 8.3 million people have signed up to vote.

Meanwhile, Malaysia, where Najib Razak has been Prime Minister since 2009, is also preparing for elections this year to be held on or before 24 August.

Najib is seeking to recapture the ruling coalition’s long-held two-thirds majority. Najib has faced strong opposition particularly because of corruption allegations. One of his biggest critics is his onetime mentor and former prime minister, 92-year-old Mahathir Mohamad. Mahathir, who has been outspoken in his criticism of Najib, said last week that he would run as the opposition’s candidate in the upcoming election.

Malaysia’s neighbour Thailand, where the military has been in power since 2014, is going to hold elections on November 18 this year after repeated delays. The junta has repeatedly delayed elections, citing concerns such as changes to the constitution and security issues. The Thai military has seized power 12 times since 1932 in the country, but last year it pledged to help conduct free and fair elections and not to stage another coup after the next election.  Around 50 million people are eligible to vote in the Thai elections.