Carpio: It’s dumb to give China access to PH Rise 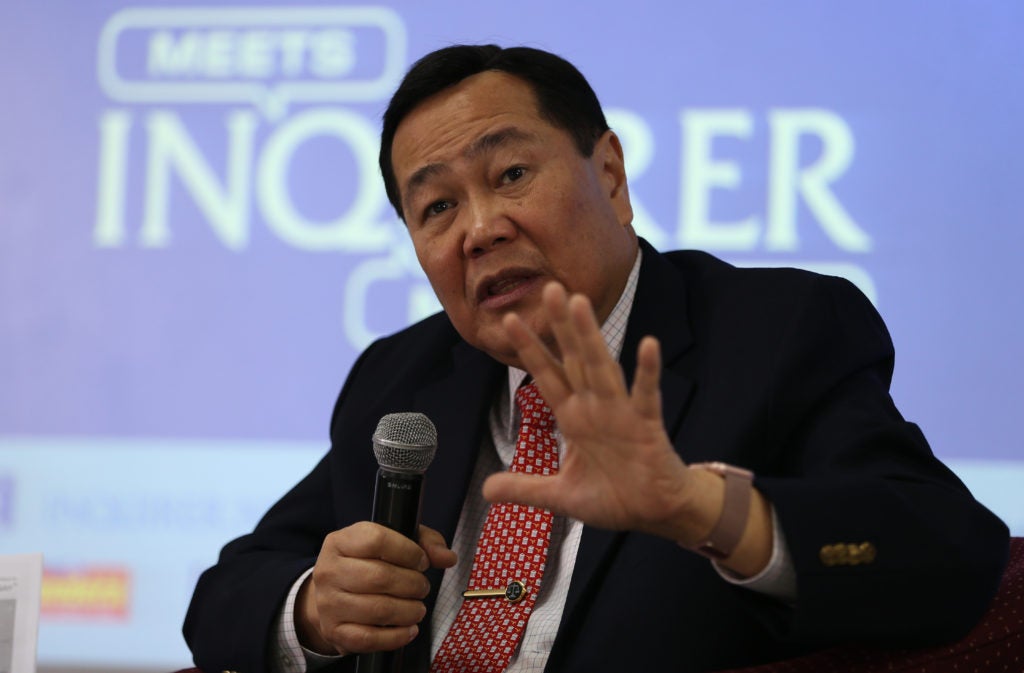 It would be “dumb” of the Philippines to allow China to explore Philippine Rise despite Beijing’s disrespect for a UN-backed arbitral court ruling recognizing Manila’s sovereign rights in the West Philippine Sea, Supreme Court Senior Associate Justice Antonio Carpio said on Sunday.

Carpio, the leading figure in the Philippines’ fight to nullify China’s claim to almost all of the South China Sea, said the Duterte administration should stop Beijing from conducting marine scientific research in Philippine Rise until it accepted the July 2016 decision of the Permanent Court of Arbitration in The Hague.

The ruling invalidated China’s sweeping claim and declared Beijing had violated Manila’s sovereign right to fish and explore for resources in the West Philippine Sea, waters within the Philippines’ 370-kilometer exclusive economic zone in the South China Sea.

China, which did not take part in the arbitration, ignored the ruling and went on to build artificial islands on reefs in the Spratly archipelago, topping some of them with runways and military installations.

President Rodrigo Duterte, however, has refused to assert the Philippine legal victory, preferring loans, investment and development assistance from China.

The ruling would benefit other claimants to territory in the South China Sea that would also challenge China’s excessive claim.

Besides the Philippines, Brunei, Malaysia, Vietnam and Taiwan also have claims in the South China Sea, through which $5 trillion in global trade passes every year.

“The refusal of China to comply with the arbitral award of the [Hague tribunal] is not a ‘normal circumstance’ and thus the Philippines should refuse China’s request for [marine scientific research] in Benham Rise,” Carpio said in an e-mail to the Inquirer, referring to Philippine Rise by its old name.

Mr. Duterte issued Executive Order No. 25 in May last year changing the name of Benham Rise to Philippine Rise.

The rise is a 13-million-hectare underwater plateau in the Philippine Sea, 250 kilometers east of Isabela province, believed to be rich in resources.

The United Nations officially recognized the rise as part of the Philippine continental shelf in 2012, giving the country sovereign rights to explore and exploit resources on the submerged plateau.

The rise became the subject of controversy early in March last year after Mr. Duterte said he had allowed Chinese survey vessels to go there as part of an agreement.

Then acting Foreign Secretary Enrique Manalo said he was unaware of any such statement made by Mr. Duterte.

It was unclear at the time whether Mr. Duterte knew where the rise was. He never explained his statement.

Last week, Magdalo Rep. Gary Alejano said the Department of Foreign Affairs (DFA) had allowed a research vessel operated by the Institute of Oceanology of the Chinese Academy of Sciences to conduct research in Philippine Rise despite China’s militarization of its artificial islands in the South China Sea.

Alejano said the DFA had rejected a similar request for a research permit from a French nonprofit, Tara Expeditions Foundation.

Foreign Secretary Alan Peter Cayetano defended the DFA’s decision, saying the law allowed foreign research in Philippine territory so long as a Filipino scientist is aboard the research vessel and the findings of the study are shared internationally.

But Carpio said “the Philippines would be dumb to grant China’s request.”

“If a bully has squatted on your front yard and requests to look at your backyard, would you grant the request of the bully?” he said.

China has “squatted on the West Philippine Sea and refuses to leave despite the ruling of the [international arbitral] tribunal,” he added.

Carpio said countries that had ratified the UN Convention on the Law of the Sea (Unclos) were duty-bound to enforce and respect the contents of the international law in its entirety.

“By refusing to accept the award of the … arbitral tribunal pursuant to the dispute settlement provisions of Unclos, China is not accepting its obligation under Unclos,” Carpio said.

“China should not be allowed to enjoy its rights under Unclos … while it refuses to accept its obligation under the arbitral award. Otherwise, China is cherry-picking and not taking Unclos as one package deal,” he said.

Carpio said the President and Cayetano were in no position to cede the country’s ownership of several islands and waters in the West Philippine Sea.

Carpio, whose criticisms of the Duterte administration’s diplomatic approach to the West Philippine Sea dispute has gotten him in Mr. Duterte’s crosshairs, said Filipino scientists should be aboard China’s marine research vessels to ensure that the Chinese were not “exploring for purposes of exploitation.”

As to Cayetano’s claim that a law had authorized a foreign state like China to conduct academic maritime research within Philippine territory, Carpio said there was actually no local statute that specifically covers such an arrangement.

But the Philippines’ ratification of Unclos in 1982 made the international treaty part of the country’s local legal system, Carpio said.

Article 246 of Unclos states that “coastal states” like the Philippines “shall, in normal circumstances, grant their consent for marine scientific research projects by other states,” he said.

“The Philippines has an obligation to allow foreign states to conduct [maritime research on] its continental shelf like Benham Rise ‘to increase scientific knowledge of the marine environment for the benefit of all mankind,’” he added.

But the findings of such scientific marine explorations “must be made known to the whole world,” Carpio said.

In a statement, Zarate said on Sunday that a joint marine seismic undertaking (JMSU) between the Philippines and China in 2005 gave Beijing access to valuable data on natural gas deposits and “jeopardized” the Philippines’ claim to Recto Bank, or Reed Bank, in the Spratly archipelago.

Zarate said the Philippines lost control and supervision over exploration for oil and other minerals at Recto Bank when the Arroyo administration entered into the deal with China National Offshore Oil Corp. and Vietnam Oil and Gas Corp.

“With the JMSU, the Arroyo administration effectively sold out the country to the Chinese, who were granted unbridled access [to] our maritime territory, especially the gathering of valuable data on natural gas deposits in our territories like Recto Bank,” he said.

“Our bad experience with the JMSU, where our country was placed in a very disadvantageous position … is bound to happen again in the case of [Philippine Rise],” he added.

Bayan Muna challenged the JMSU in the Supreme Court in 2008. The case remains unresolved. —WITH A REPORT FROM VINCE F. NONATO