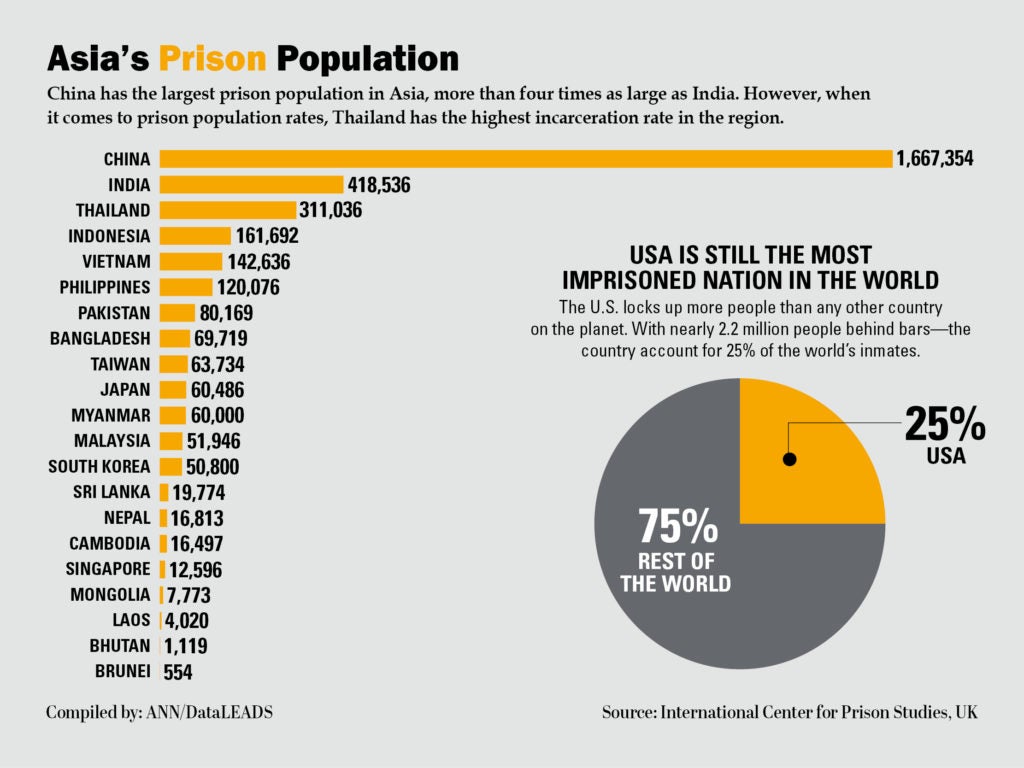 Around the world more than 10.35 million people are imprisoned either as pretrial detainees or having been convicted and sentenced, according to the report of UK-based Institute of Criminal Policy Research.

The USA has the highest prison population in the world with around 2.2 million incarcerated. China, which is four times more populous than the United States, is a distant second, with 1.6 million people in prison. The country has the highest prison population in Asia. The report mentions that the figures could be much higher for China since it does not include those in pretrial detentions and administrative detentions.

India’s prison population is second highest in Asia. Although the prison population rate is relatively low, the Indian prisons are overcrowded with 70 per cent of detainees as ‘undertrials’ or remand detainees who are awaiting final decrees in their cases.

Thailand has the third highest prison population in Asia. But with 461 prisoners for every 100,000 people, Thailand has the tenth highest incarceration rate in the world and the highest in Asia. With fourth highest prison population in Asia, Indonesia has 64 prisoners for every 100,000 citizens.  Vietnam and Philippines follow at fifth and sixth position respectively.

Pakistan is at number seven in Asia with slightly more than 80,000 prisoners. The prison population rate of the country has seen a slump from 57 per cent in 2005 to 43 per cent in 2016.  Bangladesh has 69,719 prisoners putting it at number eight in Asia.

Taiwan has the ninth highest prison population in Asia although the prison population rate has been seeing a decline from 282 to 272 in 2016. It is followed by Japan and Myanmar at tenth and eleventh position respectively.

Malaysia has twelfth highest prison population in Asia. The country has seen a surge in prison population percentage from 137 to 171 in 2016. South Korea is at number thirteen in Asia with around fifty thousand prisoners. It is followed by Sri Lanka,Nepal, Cambodia and Singapore that are at fourteenth, fifteenth, sixteenth  and seventeenth position respectively.

With less than five thousand prisoners Laos, Bhutan and Brunei are the three countries with the least number of prison population.

According to the report world prison population total has grown by almost 20 per cent which is slightly above the estimated 18 per cent increase in the world’s general population over the same period.