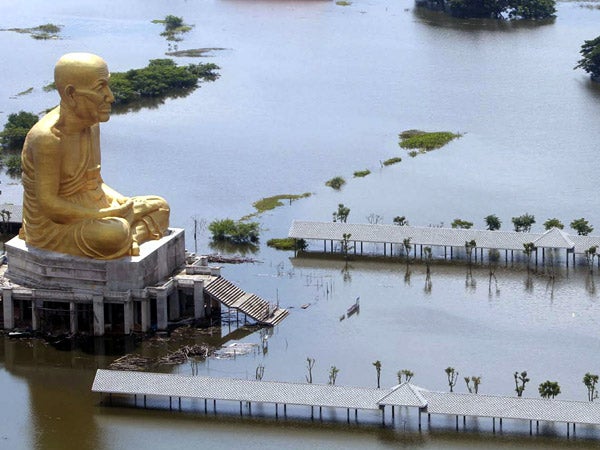 A giant Buddha statue sits amidst the floods in Ayutthaya province, central Thailand. Like most of monsoon-swept Asia, the city and its environs have experienced periodic floods since it was founded more than two centuries ago. AP File Photo

BANGKOK—As millions of urbanites living a modern lifestyle fear that torrents of floodwater will rage through Thailand’s capital, some in enclaves of a bygone era watch the rising waters with hardly a worry — they live in old-fashioned houses perched on stilts with boats rather than cars parked outside.

“No problem for them. They’ll be safe,” says boatman Thongrat Sasai, plying his craft along some of the remaining canals that once crisscrossed Bangkok, earning it a “Venice of the East” moniker.

Like most of monsoon-swept Asia, the city and its environs have experienced periodic floods since it was founded more than two centuries ago. But recent decades have witnessed dramatic changes — from intense urbanization to rising waters blamed on climate change — that are turning once burdensome but bearable events into national crises.

“In a sense traditional society had an easier coexistence with water and flooding,” says Aslam Perawaiz, an expert at the Bangkok-based Asian Disaster Preparedness Center. “Now, with such rapid development there’s a much bigger problem.”

Across Asia, areas of high population density are also those most prone to flooding and other water-related disasters, according to an Associated Press analysis of recent UN maps. When overlaid, the maps show such convergence in a wide arc from Pakistan and India, across Southeast Asia, to China, the Philippines and Indonesia. 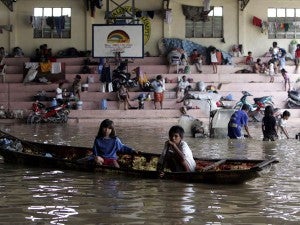 Residents keep themselves dry on the steps of a flooded basketball court which serves as an evacuation center as flooding continues for the fourth day at Calumpit town in Bulacan province, in the Philippines. AP File Photo

This isn’t mere bad luck. Historically, agrarian societies settled in the continent’s great river basins, including the Ganges in India, the Mekong in Southeast Asia and the Chao Phraya in Bangkok. The gift of the rivers was fertile land, but it came at the price of almost annual flooding during the monsoon rains.

By providing sufficient food for growing populations, these rice bowls in turn spurred the rise of some of Asia’s largest cities from Bangkok to Kolkata, India. The concentration of national resources and wealth means even smaller disasters can have a big impact.

Severe flooding this year has killed more than 1,000 people across Asia this year, and economic losses are running in the tens of billions of dollars.

Thailand, suffering its worst flooding in 50 years, offers a prime example of the perils of centralization and man’s fractured bonds to the natural environment. Floodwater has spilled into outlying parts of Bangkok, and the government is scrambling to try to prevent the inundation of the city center.

The basin of the Chao Phraya, the River of Kings and its headwaters in the north, is home to 40 percent of the country’s 66 million people. Bangkok is Thailand’s industrial, financial, transportation and cultural heart, contributing more than 65 percent of its gross domestic product.

Growth, outward and upward, has been stunning. Bangkok’s greater metropolitan area now covers nearly 3,000 square miles (more than 7,700 square kilometers) and continues to gnaw away at a surrounding countryside that once acted as a natural drain for water from northern mountain watersheds — themselves shedding more water because of widespread deforestation.

Highways, suburban malls and industrial parks, many now swamped and sustaining crippling losses, create dangerous buildups of water or divert it into populated areas rather than along traditional paths toward the Gulf of Thailand.

In Bangkok itself, streets where today’s middle-aged residents used to play with water buffaloes as children are studded with towering, cheek-by-jowl condominiums and office blocks. The ratios of green space to population and area are among the lowest of any major city in the world.

To this add extreme and erratic weather, said to be triggered by climate change, which has increasingly buffeted Asian countries with storms, typhoons and floods. These include ones such as Thailand with a historically mild tropical climate.

Further, the legal and illegal pumping of underground water faster than it can be replaced has compressed water-storing aquifers, causing Bangkok to sink between 0.8 and 2 inches (2 to 5 centimeters) each year. Scientists say the rise of waters in the nearby gulf as a result of global warming could combine with the sinking land to put Bangkok under water much of the time by mid-century.

Similar subsidence and sea-water encroachment is occurring in Jakarta, Ho Chi Minh City and Manila, where a typhoon last month triggered the worst flooding in the Philippine capital for decades.

Bangkok, some experts half-jokingly say, may well return to what it was in the 19th century: a water world where almost all its 400,000 inhabitants lived on raft-houses or homes on stilts. “The highways of Bangkok are not streets or roads, but the river and the canals,” wrote British envoy Sir John Browning in 1855.

A century later, on advice of international development agencies, Bangkok began to fill in most of its canals — excellent conduits of floodwaters — to build more roads and combat malaria.

Sumet Jumsai, a prominent architect and scholar, says that Bangkok’s early development “evolved with nature and not against it.” But, he adds, by the early 1980s the city had become “an alien organism unrelated to its background and surroundings, a great concrete pad on partially filled land that … must succumb to the flood every year.”

Dikes and drainage pipes have been built, but nature appears to be keeping several steps ahead of manmade defenses.

“Of course this year the flood is maybe too great to stop, but all in all it was better in the old days,” says Fairest Klatlek, sitting atop a poorly erected concrete flood wall through which water rushed into the first floor of her home. She and her electrician husband, like most of their neighbors, had built a ground-hugging, modern house along the Bangkok Noi canal.

Sumet is designing modern, functional buildings, including a university campus, built on stilt columns and proposes a revival of floating houses, promenades and markets.

“The underlying philosophy is the return to living with nature like in Bangkok of yesteryear,” he says.

But Aslam, the disaster expert, says, “I don’t think we can go back to living in harmony with nature as in the past. What is now necessary is huge investments and long-term planning by governments to mitigate such flooding.”