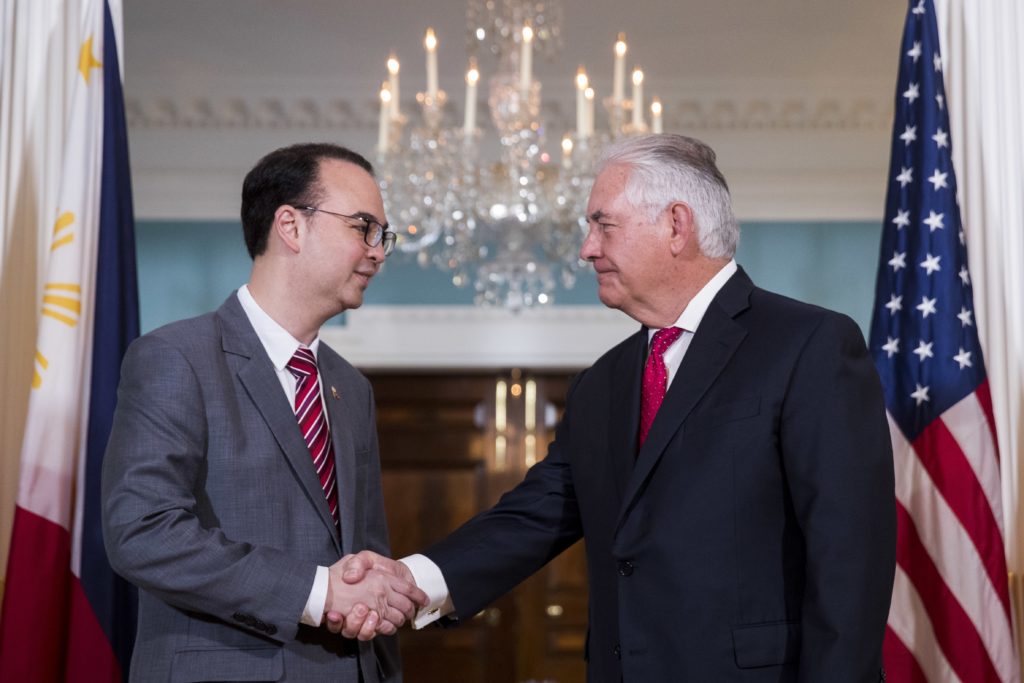 US Secretary of State Rex Tillerson meets with Secretary of Foreign Affairs of the Philippines Alan Peter Cayetano at the State Department, Wednesday, Sept. 27, 2017, in Washington. (Photo by ANDREW HARNIK / AP)

In a phone call on Friday morning (PH time), Tillerson thanked Foreign Affairs Secretary Alan Peter Cayetano for the Philippines’ “strong leadership” as it called on North Korea to disarm its nuclear warheads.

“The Secretary (Tillerson) thanked Secretary of Foreign Affairs Cayetano for the Philippines’ strong leadership in opposing the Democratic People’s Republic of Korea’s unlawful nuclear and missile programs, particularly in its role as 2017 Association of Southeast Nations (ASEAN) Chair,” the US State Department said in a statement.

During the 31st ASEAN Summit, President Rodrigo Duterte and US President Donald Trump issued a joint statement condemning North Korea for not complying with the United Nations Security Council resolution on denuclearization.

Duterte and Trump also urged all countries, including members of the Association of Southeast Asian Nations (Asean), to openly oppose North Korea’s weapons program as well as downgrade their diplomatic and economic engagement with the country.

At the same time, Tillerson also pledged continued support from the US for both the stabilization efforts in war-torn Marawi City and counterterrorism operations in the Philippines.

“Both sides agreed to work to increase bilateral cooperation under the US-Philippines alliance on these and other pressing issues in 2018,” the statement read. /atm