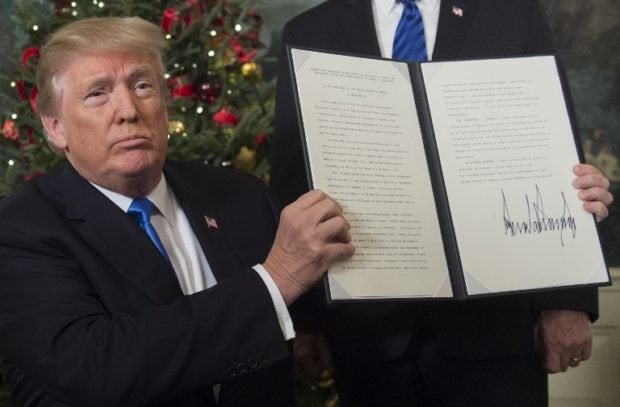 US President Donald Trump holds up a signed memorandum after he delivered a statement on December 6, 2017, recognizing Jerusalem as Israel’s capital. The recognition overturns decades of US policy and risks triggering a fresh spasm of violence in the Middle East.”I have determined that it is time to officially recognize Jerusalem as the capital of Israel,” Trump said from the White House.”It’s the right thing to do.” AFP FILE

The Philippines does not support the move of US President Donald Trump recognizing Jerusalem as the capital of Israel, a move that has inflamed Muslims across the world and escalated tension between Palestine and Israel.

“The Philippines has always supported the policy of two states for two peoples as a long-term solution to the conflict between Israel and the Palestinians, consistent with our vote in favor of the Partition Plan for Palestine in the United Nations in 1947,” the Department of Foreign Affairs (DFA) said in a statement issued December 13, Wednesday.

The statement belied news reports that came out in Israel on December 6 claiming President Duterte is considering moving the Philippine Embassy in Israel from Tel Aviv to Jerusalem, following Trump’s announcement.

The United Nations General Assembly passed a resolution on November 29, 1947, that partitioned Palestine between Arabs and Jews and paved the way for the creation of the Jewish state of Israel.

Under the plan, Jerusalem which is considered holy land by Jews, Arabs and Christians, was placed under international administration. /cbb