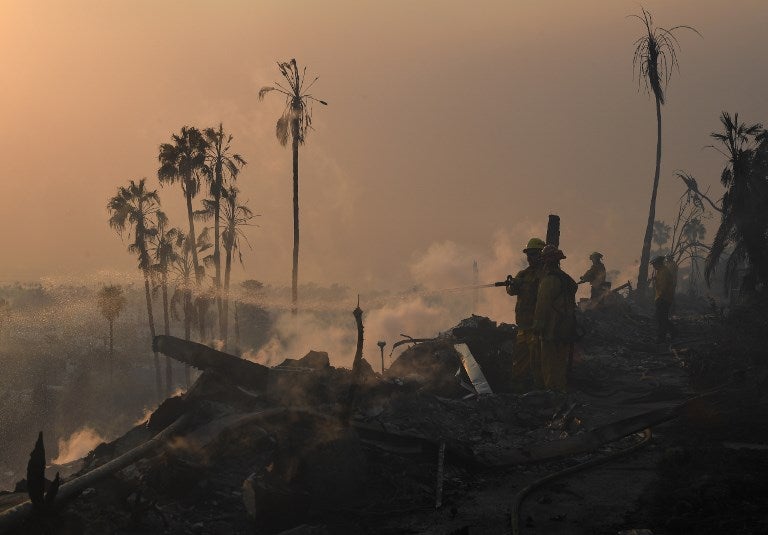 Firefighters hose down flareups at the two story Hawaiian Village Apartment complex that burnt to the ground during the Thomas wildfire in Ventura, California on December 5, 2017.
Firefighters battled a wind-whipped brush fire in southern California that has left at least one person dead, destroyed more than 150 homes and businesses and forced tens of thousands to flee. / AFP PHOTO / MARK RALSTON

More than 100,000 Filipinos residing along the path of the raging California wildfires have been urged to take necessary precautions and evacuate once ordered by authorities.

Department of Foreign Affairs (DFA) Secretary Alan Peter Cayetano said they are closely monitoring the outbreak of the latest wildfires in multiple areas in southern California.

Cayetano said that according to the Philippine Consulate General in Los Angeles, as many as 115,000 members of the Filipino community are threatened by the three wildfires in the state.
“We join our kababayans in the Philippines and in the United States in praying for the members of the Filipino Community and their neighbors in Ventura and Los Angeles counties that they will be spared from the raging infernos that are threatening their lives and their homes,” he said in a statement on Thursday.

“Kababayans affected by the fires should not hesitate to get in touch with the Philippine Consulate General in Los Angeles if they need assistance,” Cayetano also said as he expressed hope that the fires would soon be contained.

According to the Consulate General, 25,800 Filipinos are residing in Ventura County where the biggest wildfire, dubbed as the “Thomas Fire,” continued to wreak havoc.

Ventura County has been placed under a state of emergency after 45,500 acres of land, and 150 buildings and houses have been gutted by the wildfire, Consul General Adel Angelito Cruz said.
He added that there are 89,400 Filipinos in San Fernando Valley, which is being threatened by the so-called “Creek Fire.”
Cruz said the DFA continues to monitor the Creek Fire and the Rye Fire in Los Angeles County, which have already consumed more than 11,500 acres of land. The two wildfires also remain out of control, he said.
Cruz likewise said that Filipinos who may be affected by the fires can contact the Philippine Consulate General at +1.213.268.9990 or +1.213.587.0758 for assistance.  /kga