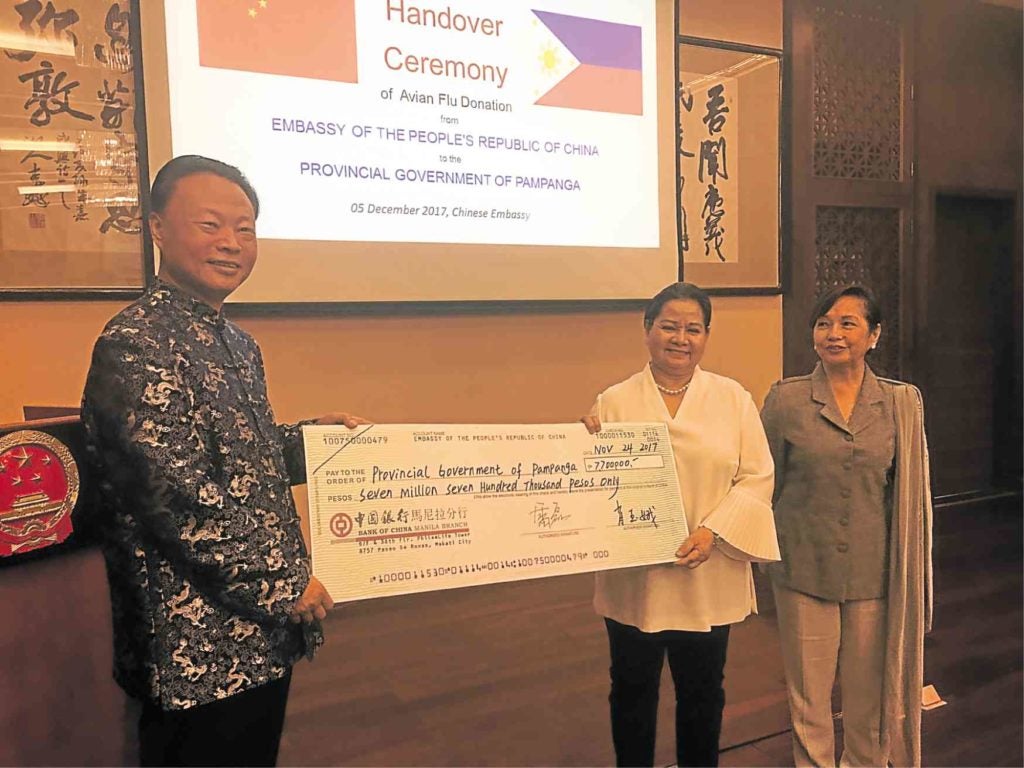 Chinese Ambassador Zhao Jianhua said his government was monitoring the recent detection of bird flu in Cabiao town, also in Nueva Ecija, to see how his country could help.

Pampanga Gov. Lilia Pineda said the money would be used to buy a mobile laboratory for testing avian influenza strains. Regulatory and monitoring capacities would also be improved, she said.

Pineda and Pampanga Rep. Gloria Macapagal-Arroyo received the donation at the Chinese Embassy in Makati City.

Zhao described the donation as the “first step” in helping prevent avian influenza in the province.

“China suffered many cases of bird flu and natural disasters and we feel the same [losses],” he said.

Losses from the culling of more than 420,000 chickens, ducks and quails in Pampanga reached P192 million, according to the provincial disaster risk reduction and management office.

“Our end goal is to make food safe to the Filipino people,” Pineda said in her acceptance speech. Pampanga is among the top five poultry producers in the country.

Zhao also said the Chinese Embassy was following the developments in Cabiao where the third bird flu outbreak was detected last month. The towns of Jaen and San Isidro in Nueva Ecija were quarantined in August to contain bird flu infections there.

In San Luis, 1,200 chicks were introduced in four farms to check whether the H5N6 bird flu strain continued to thrive there, according to Dr. Augusto Baluyut, provincial veterinarian.

Fecal samples from the sentinel chicks are taken every Tuesday from the four farms, he said, adding that so far, “there have been no unusual [cases of] mortality.” —Tonette Orejas