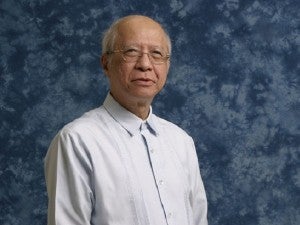 Nebres was recognized for his outstanding achievements and accomplishments as a mathematician, educator, mentor and administrator and for his contributions to education and social reform.

In his speech at the conferment rites in Malacañang, Aquino cited some of the achievements of the 71-year-old Nebres.

The President said that Nebres helped establish the Ateneo Center for Educational Development, which he noted focuses on improving education in public schools. ACED now works with local governments with over 400 public schools in Quezon City, Parañaque, Valenzuela, Nueva Ecija, La Union and other parts of the country.

The President noted that Nebres was now chairman of the Synergeia Foundation which works with public schools in over 200 municipalities, including some in the Autonomous Region in Muslim Mindanao.

Nebres said he was supposed to receive the award early this year along with Raul Fabella, his co-awardee as National Scientist for this year. But he said he was in Europe when the Palace announced the award.

He is the 37th National Scientist of the country and one of the only 15 awardees alive today.

Joseph Gordon-Levitt looking for Filipinos to join his writing project