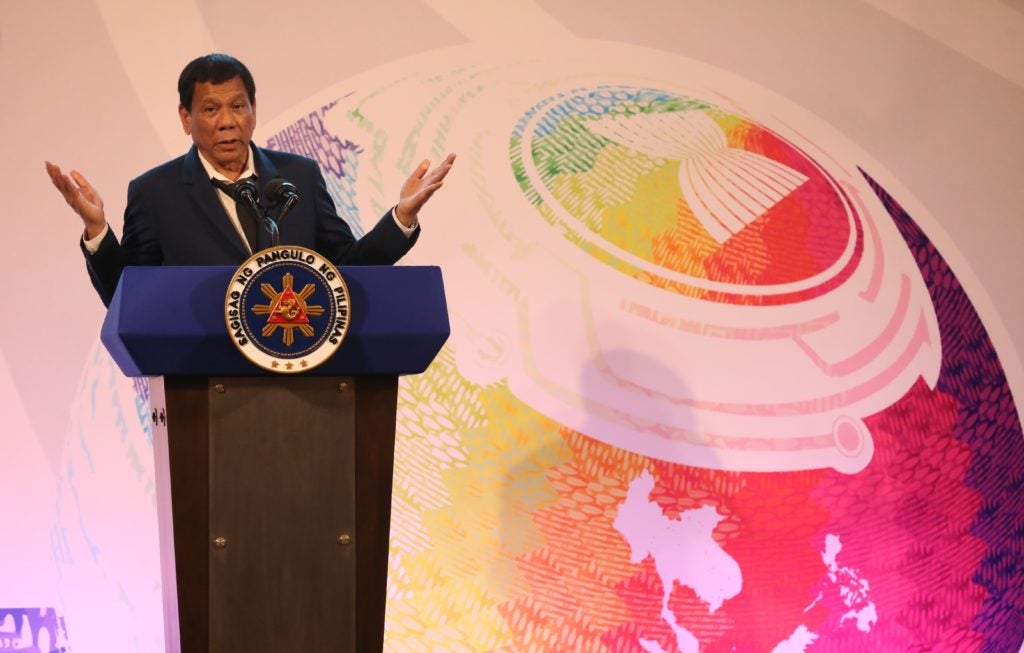 President Rodrigo Duterte faces the media after the closing ceremony of the 31st ASEAN Summit and related meetings in Manila on November 14, 2017. PHOTO BY JOAN BONDOC

China has promised the Philippines that it would fast-track the negotiations for the proposed code of conduct for claimants in the South China Sea, according to President Duterte.

Mr. Duterte said he pressed Chinese officials to provide a date for the approval of the code of conduct and he was told that the Chinese side would “really fast-track” it.

“I said … ‘We’ll just observe certain norms of conduct and we were pressing China to set a date,’” Mr. Duterte said at a news conference after the close of the Association of Southeast Asian Nations (Asean) Summit.

“And China said, ‘Do not just hurry up, but we will consider really fast-tracking this code of conduct,’” he added.

China and the 10-member Asean agreed in Manila on Monday to start the formal negotiations on a code of conduct for claimants in the South China Sea to prevent the escalation of the maritime dispute.

China claims nearly all of the 3.5-million-square-kilometer South China Sea, including portions claimed by Asean members Brunei, Malaysia, the Philippines and Vietnam.

Taiwan also has claims in the waterway, where $3 trillion in global trade passes every year.

Before meeting Chinese President Xi Jinping over the weekend in Da Nang, Vietnam, Mr. Duterte said he would press China to “hurry” in adopting a code of conduct because Asean was worried about the militarization of the South China Sea.

There were also concerns that the negotiations would again drag on for years.

The idea of a code of conduct was first brought up in the mid-1990s while talks for a framework for negotiations for  the code began only in 2011.

Chinese and Asean diplomats approved the framework in August.

Mr. Duterte said a code of conduct was needed because it was not only China that the Philippines had to contend with in the South China Sea.

“We can’t finish this if you say you got to China and give them a copy of the arbitral ruling. It does not end there,” said Mr. Duterte, referring to the July 2016 ruling of the United Nations-backed Permanent Court of Arbitration that invalidated China’s sweeping claims in the South China Sea on historical grounds and clarified the Philippines’ rights to its 370-km exclusive economic zone (EEZ) in the waterway.

“If you start to claim upward, there’s Taiwan also claiming a part of what is being claimed by China itself,” Mr. Duterte said.

“And there’s Vietnam having a problem also with China and of certain islands there. So the only way is really to talk dialogue, ask for a peaceful resolution and how can we go about using [the] West Philippine Sea,” he added, referring to the waters within the country’s EEZ in the South China Sea.

The President said China assured him that “overflight in space above and the use of the [South] China Sea will proceed — and it was a promise of China — unbridled, unfettered and we can use the space.”

“But I have told them — and every time that we talk about claims and ownership I’ve always [brought along] our military generals—I told China that I will have to confront China on the arbitral ruling once maybe in … during my term,” he said.

Mr. Duterte told the East Asia Summit on Tuesday that the situation in the South China Sea had improved with the agreement between Asean and China to start negotiations for the adoption of a code of conduct, according to presidential spokesperson Harry Roque.

Roque said Mr. Duterte also expressed grave concern over tensions on the Korean Peninsula, which he described as  “a major flash point in the region.”

“[He] strongly urged [North Korea] to immediately comply with its obligations and arrive at relevant resolutions,” Roque said. “He also expressed support for initiatives to improve territorial relations to establish permanent and lasting peace [on] the Korean Peninsula.”