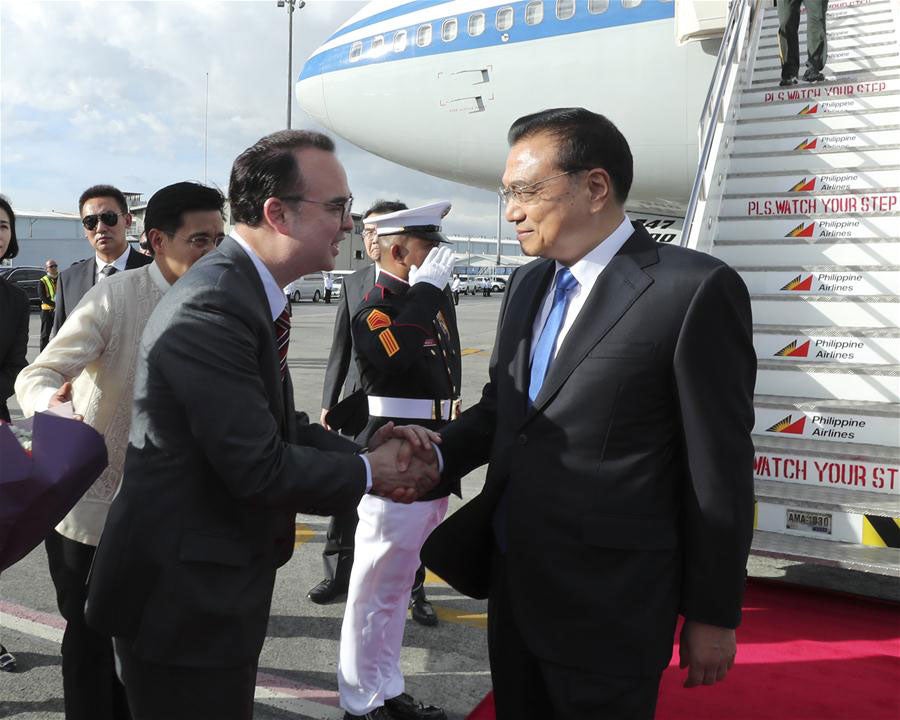 Chinese Premier Li Keqiang (R, front) arrives in Manila, the Philippines, Nov 12, 2017, for an official visit to the Philippines and a series of leaders’ meetings on East Asian cooperation. CHINA DAILY

Chinese Premier Li Keqiang said on Tuesday that China will firmly safeguard freedom of navigation and overflight in the South China Sea.

He said China, as the largest country in the South China Sea and a major user of its sea lanes, wants peace and stability for the region more than any other country.

Li made the remarks at the 12th East Asia Summit in Manila on Tuesday afternoon.

Since 2005, the annual meeting of leaders of 18 countries, including 10 Asean member states and eight dialogue partners, serves as a forum for dialogue on broad strategic issues of relevance to East Asia as well as other regional and global issues, focusing on areas such as international terrorism, energy, infectious diseases, sustainable development and poverty reduction.

The situation in the South China Sea has been cooling down, Li said.

The premier pointed out that over the past 12 years, the summit has become an important platform for maintaining regional stability and dialogue on key issues, particularly at present when the global economy is still in a sluggish recovery and trade protectionism is on the rise.

He said the East Asia Summit should remain a strategic forum guided by national leaders and adhere to the principle of being driven by both economic development and political security.

During the meeting, Li called for efforts to build a regional economic community and promote collaboration between China’s Belt and Road Initiative and Master Plan on Asean Connectivity 2025, as well as to work toward an early implementation of the upgrade to the China-Asean Free Trade Zone.

The meeting concluded with an announcement of several packs of cooperation documents, including a declaration of cooperation on poverty alleviation, preventing terrorism and curbing money laundering and terrorism financing.

Guo Yanjun, deputy director of the Institute of Asian Studies at China Foreign Affairs University, said the premier’s reiteration of China’s stance on the South China Sea issue sends a signal that China has the competence and wisdom to properly handle the issue.