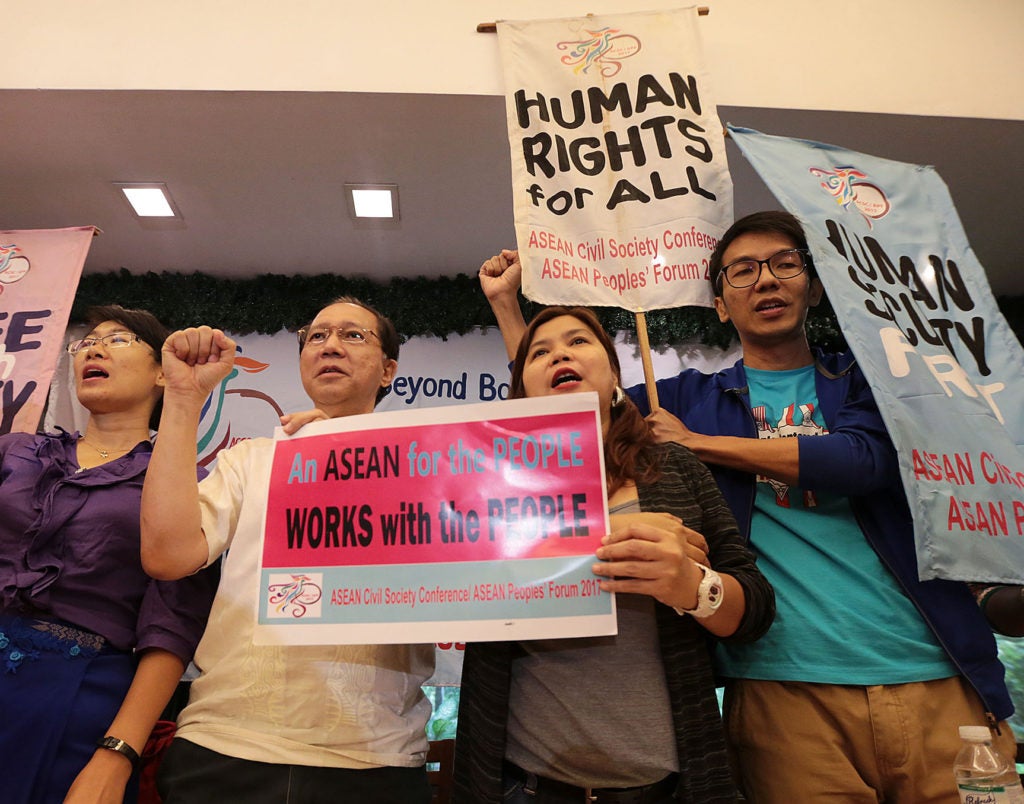 PEOPLE-CENTERED Leaders of the Asean Civil Society Conference/Asean People’s Forum urge Asean heads of states to make partners of people’s organizations and social movements. They include (from left) Sotheavy Srey of Cambodia, Eduardo C. Tadem and Jelen Paclarin of the Philippines, and Soe Min Than of Singapore. —GRIG C. MONTEGRANDE

“For 50 years, genuine people’s participation in the Asean has been severely limited. Despite the civic organizations’ efforts to initiate engagements for constructive dialogues alongside Asean’s claims of having more inclusive and meaningful spaces, Asean remains largely inaccessible to people,” Jelen Paclarin, chair of the steering committee of the Asean Civil Society Conference/Asean People’s Forum (ACSC/APF), told a news conference in Quezon City.

Asean held its 31st summit in Manila on Monday and Tuesday.

Paclarin said the Asean summit should make people’s organizations and social movements partners, not exclude them.

“Asean is for us. Asean is for the Southeast Asian peoples. Build capacity on people empowerment instead of holding 1,000 meetings every year. Prioritize people’s agenda,” she said, pointing to a “yawning gap between the richest Asean member-states and those still in the early stages of development.”

Eduardo Tadem of the Philippine organizing committee said Asean summits often tackled mostly economic matters, such as how to increase exports and trade.

“Asean is basically an organization of the Asean nations’ political oligarchies and big corporations that exclude the 99 percent of the peoples of Asean. They make decisions for themselves,” Tadem said.

Missing from Asean, he said, “are the peoples of Asean, those marginalized, those excluded [from] the development process that [has] been going on for the past 50 years—the workers, peasants, fishermen, women, LGBTQ.”

Than, who will organize the ACSF/APF in Singapore next year, said Asean should lay down policies based on consultations with the peoples of the region.

Tadem said Asean consulted civil society groups a few times but these were done in a “very meaningless manner.”

He said 12 years of efforts by civil society groups to be taken into the Asean process had been fruitless.

“They have not resulted in any basic change, or any genuine recognition of the role of civil society organizations in the Asean process,” he said.

Rachel Arini of Forum-Asia and Sumitha Kishna of Malaysia said socio-civic groups had been systematically excluded from the Asean summit and process.

“The [cause] of the problem should be taken from the bottom up,” Arini said.

Commenting on the Asean accord on the protection of migrant workers signed on Tuesday night, Tadem said the deals signed during this week’s summit were nonbinding and any Asean member country could opt out, as the agreements were subject to the laws of member nations.

“It’s something that looks good on paper, but not in practice,” he said, citing the so-called contractualization in the Philippines.

Migrant workers group Migrante International warned that the accord may just become a “landmark spoiler” if it was not legally binding.

After the conference, the ACSC/APF recommended to Asean that it include a social dimension in its integration process, with emphasis on human rights; review its principle of noninterference; advance democracy and democratic decision-making in the region; give priority to peoples’ agenda over corporate agenda, and respect collective struggle. —With a report from Tina G. Santos