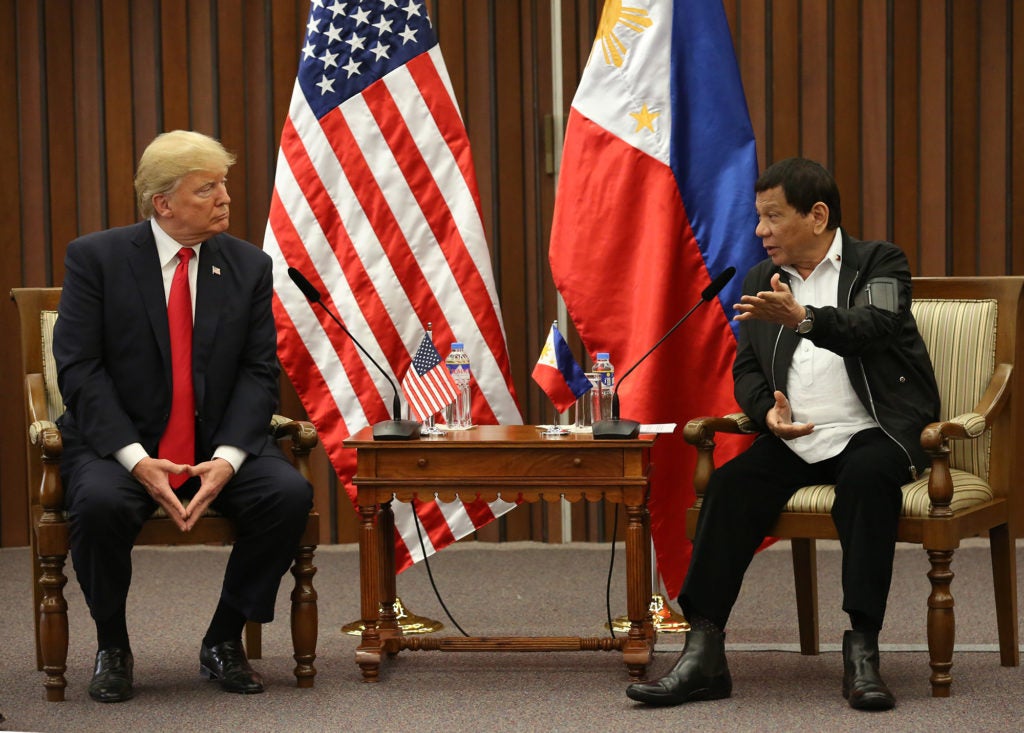 US President Donald Trump steered clear of human rights issues during his “frank” 40-minute discussion with President Rodrigo Duterte on the sidelines of the Association of Southeast Asian Nations (Asean) Summit in Manila on Monday, according to presidential spokesperson Harry Roque.

Trump himself said the Philippines and the United States “had a great relationship” in his remarks at the start of the bilateral meeting.

“But we’ve had a great relationship. This has been very successful. We have many meetings today with many other leaders,” he said, praising as well the Philippine chairmanship of the Asean Summit.

During their closed-door discussions, the two leaders affirmed the “very close ties” between their two countries, and Trump described himself as someone who had always been a friend of the Duterte administration “unlike the previous administrations of the United States,” Roque said.

“He stressed that he can be counted upon as a friend of the Duterte administration. The issue of human rights did not arise. It was not brought up,” Roque said.

Human rights, she added, briefly came up in the context of the Philippines’ fight against illegal drugs. She did not say if Trump was critical of the violence.

“There was also mention that no one was killed in kneeling position. Trump also said that [the Philippines] follows [the] rule of law in [the] war [against] drug[s] as in pursuance of human development. There was no express[ed] mention of [human rights] or [extrajudicial killings],” he said.

Roque said Mr. Duterte launched into an explanation of his controversial war on drugs, which had generated concern both here and abroad because of the killings of thousands of drug suspects by police.

“The US president appeared sympathetic and did not have any official position on the matter but was merely nodding his head, indicating that he understood the domestic problem that we faced on drugs,” Roque said.

At the first part of the meeting that reporters were allowed to cover, a US reporter asked Trump if he would bring up human rights abuses.

It was Mr. Duterte who replied, saying they were not answering any questions as they were in a bilateral meeting. He said a press conference would be held later.

“We will be talking about both matters of both reference to the Philippines and US. With you guys around, you are spies,” he said.

US lawmakers and rights groups have called on Trump to take up concerns about the thousands of drug-related killings with Mr. Duterte, who has gained notoriety for cursing at critics of his war on drugs and accusing them of meddling in the Philippines’ internal affairs.

Last year, Mr. Duterte told then US President Barack Obama to “go to hell” after the United States expressed concern over the killings.

He also told the European Union “fuck you” for raising concerns about violations of human rights in his crackdown on narcotics.

When they spoke on the phone shortly after Trump’s electoral victory last year, Mr. Duterte said Trump supported his controversial campaign and told him that he was doing it “the right way.”

Mr. Duterte himself has declined to talk about the opioid crisis in the United States.

Trump, at the start of the meeting on Monday, said he appreciated the “great treatment” that the Filipinos had given him and praised the Sunday night gala dinner that featured Filipino entertainers.

“I thought last night’s event was fantastic, tremendous talent. Most of them I guess from the Philippines. Tremendous talent, musical talent, dance talent. We really had a tremendous time, all of the leaders,” he said.

‘Thing of the past’

Presidential Communications Operations Office (PCOO) Secretary Martin Andanar said the friendly relations between Mr. Duterte and Trump showed the strained relations between the Philippines and the United States were now “a thing of the past.”

“They really hit it off. President Duterte called up President Trump when he won. Their excellent relationship started there,” Andanar said.

He said Trump took his time in talking with members of the Cabinet at the gala dinner on Sunday night.

“We were at the back of the curtain to welcome the heads of state and the heads of government. You could really see, when President Trump came in, that he really had this great smile and he was game in taking selfies with us,” Andanar said.

“He talked to us and he really took his time to talk to us. He’s really an iconic figure,” he added. —With a report from AP