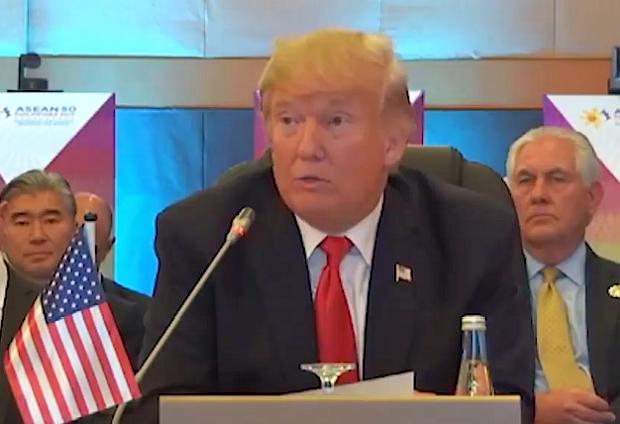 US President Donald Trump speaks at the Asean-US Summit on Monday, Nov. 14, 2017. (Photo from an RTVM video)

American residents in the Philippines vowed to fight against corruption and discrimination which they said mar the administration of US President Donald Trump.

In a statement Monday, the group dubbed as “TeamMuellerManila” said they will refrain from public demonstrations, but added that they will “use their sacrosanct rights as voting Americans.”

“We want Donald Trump to know, however, that we defy his message and his corruption by using our sacrosanct rights as voting Americans. We are watching and we will resist,” TeamMuellerManila said in a statement on Monday.

“As the President of the United States arrives in the Philippines – our country of residence – we as American expats would like to make our voices heard. We are outraged and deeply concerned with the leadership of our country,” they said.

“On Trump’s watch, corruption and racism have spun out of control and we refuse to allow these things to be normalized,” they added.

They said “TeamMuellerManila” was named after Special Counsel Robert Mueller who has been tasked to investigate possible collusion with the Russian government by Trump’s 2016 election campaign.

The group said they planned to work with like-minded organizations in the United States and will encourage other American expats in the Philippines to register and vote in the 2018 US Congressional elections in order to deny Trump a majority in Congress, opening the way to possible impeachment.

As one of Asean’s dialogue partners, Trump is currently in the country to participate in the 31st Association of Southeast Asian Nations (Asean) Summit and Related Meetings in Manila.