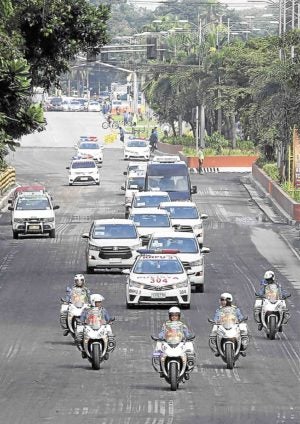 Security officials hold a dry-run for the Asean summit in which vehicles that do not belong to Asean convoys would be stopped to give way to vehicles carrying Asean delegates.—MARIANNE BERMUDEZ

Which of the 21 world leaders coming to the Philippines for the 31st Association of Asian Nations (Asean) summit will be magiting (courageous), marangal (honorable), mapayapa (peaceful), magiliw (amiable) or magalang (respectful)?

These Filipino qualities were among the names given to barong Tagalog that the leaders—including the heads of nine other Asean members and US President Donald Trump—will be given to wear for the special gala celebration on Sunday for Asean’s 50th anniversary.

The celebration was meant to showcase the best of Filipino artistry and talent.

Embroidered piña cocoon barong Tagalog for male leaders were designed by Albert Andrada and will feature the Asean logo in their customized buttons in the center front and cuffs, the President’s Social Secretary Annalyn Tolentino said in a statement.

Each barong was named after a distinct Filipino quality, said Tolentino.

President Duterte’s barong will be the same as that of other leaders, she said, although it was unknown which quality he would wear.

Women, mostly the leaders’ spouses, would be dressed in Filipiniana attire designed by Andrada, Rajo Laurel and Randy Ortiz.

The President will start the gala dinner at the SMX Convention Center with a welcome message and toast.

The dinner will feature a four-course Filipino-Asian fusion menu prepared by chef Jessie Sincioco, who also cooked for Pope Francis during his visit to the Philippines, and Sofitel Philippine Plaza Manila.

Malacañang said the world leaders’ spouses who would join them in the Philippines would be given a tour of an Asean-themed exhibition at the Cultural Center of the Philippines on Nov. 13.

The exhibit will showcase the organization’s golden anniversary.