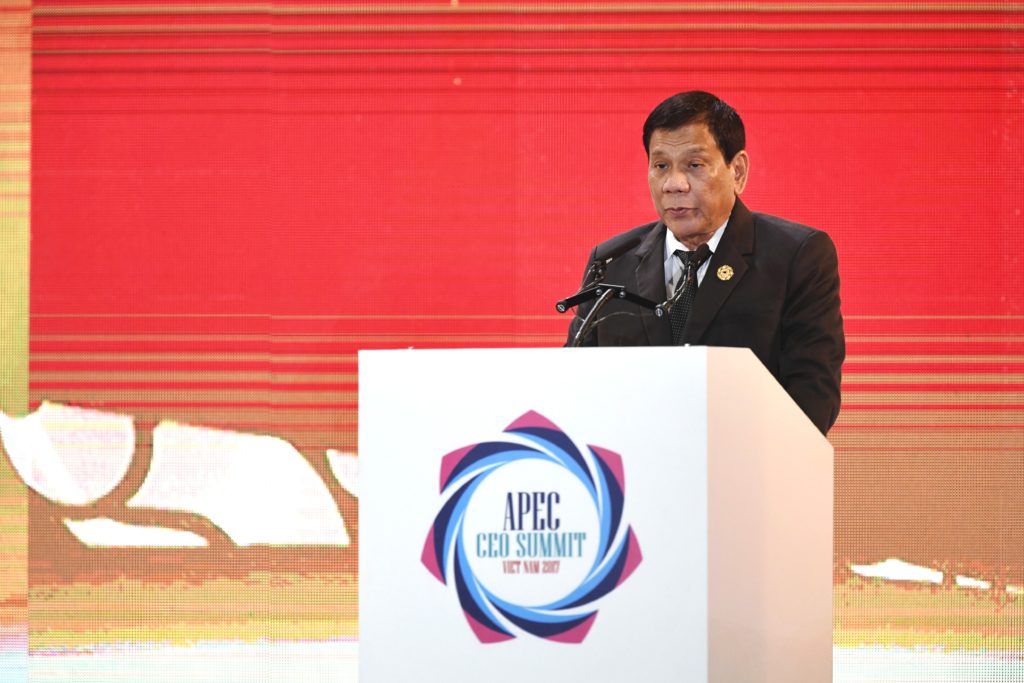 DA NANG, Vietnam—Globalization should lead not just to wealth creation but also to wealth distribution, President Duterte told top business leaders of Asia and the Pacific on Thursday.

“[T]he rich would become richer and the poor would become poorer unless things are changed for those who are left behind,” Mr. Duterte said at the Apec (Asia-Pacific Economic Cooperation) CEO Summit.

In his keynote speech, Mr. Duterte urged businessmen to adopt an “inclusive business model” and include micro, small and medium enterprises (MSMEs) in their operations.

He added that developed countries should allow poorer nations to gain better market access to help remedy the negative effects of the economic integration of global markets and the sociocultural integration among countries.

The President said Apec would be relevant only if prosperity was shared by all.

The keynote speech of Mr. Duterte, who arrived here early evening on Wednesday, was his first public function.

Filipino businessman Tomas Alcantara introduced Mr. Duterte to the audience before he delivered his speech.

“The essence of true cooperation is that all are partners and everyone contributes. Charity is not what less developed economies and small businesses need,” Mr. Duterte said.

He said that in less-developed economies, small businesses needed greater market access and the opportunity to participate in growth and development.

“Unless we adopt this mindset, inclusive growth will continue to elude us,” he said.

Mr. Duterte noted that efforts of poorer countries to rise up the value chain were being undercut by mass migration of skilled workers.

“Globalization to a certain extent has really damaged poor economies,” he said.

By way of example, Mr. Duterte said, “the best of our young (Filipinos) … tend to go to the places where the economy is thriving,” such as the United States.

More than 10 million Filipinos work overseas, around 10 percent of the population, remitting billions of dollars back to the country each year.

Mr. Duterte acknowledged US President Donald Trump’s complaints that globalization had also sent American manufacturing jobs to countries with cheap labor such as China that hurt US workers.

He said, “America was the first victim of globalization and that is why Trump is trying to lure [American companies] back and said ‘America First.’”

But Mr. Duterte said poorer nations faced the hardest edge of global commerce as they were stripped of labor and raw materials to fuel a world economy they could not compete in.

He said remedial measures, like helping others to develop their capacity-building, should be taken.

After giving his speech, the President held a bilateral meeting with Vietnamese President Tran Dai Quang and Papua New Guinea Prime Minister Peter O’Neill. —WITH REPORTS FROM AP AND AFP