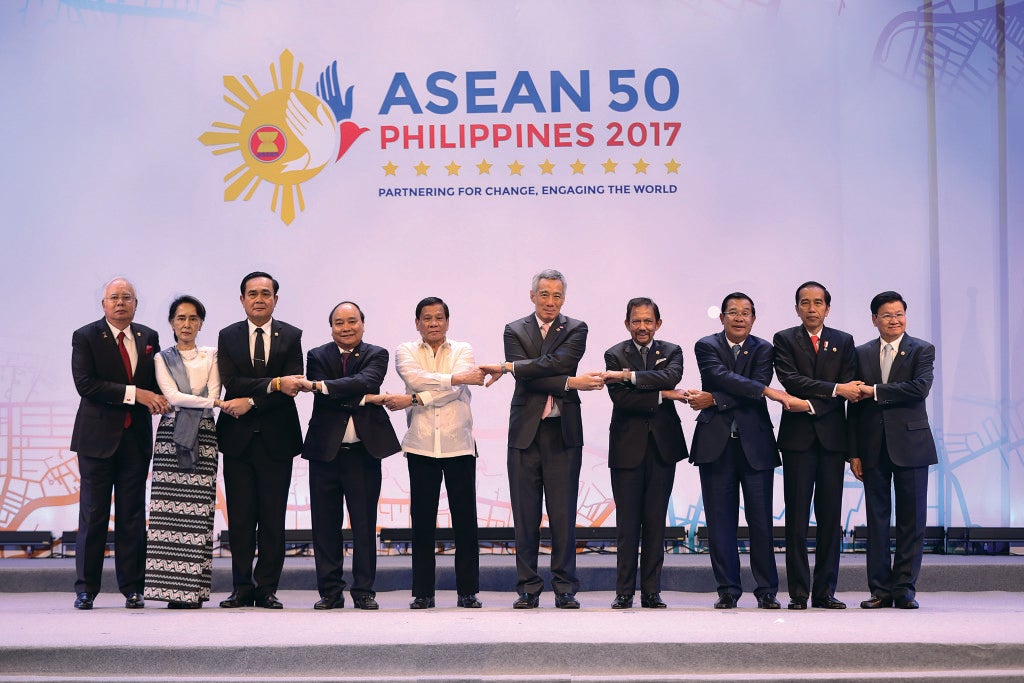 Bolkiah was born on 15th July 1946 in Brunei Town (now Bandar Seri Begawan), and studied in  Kuala Lumpur, Malaysia. From 1966 to 1967, he trained as a Royal Military Academy officer in Sandhurst, United Kingdom.

The Brunei sultan and prime minister is married to Duli Raja Isteri Pengiran Anak Hajah Saleha. They have five princes and seven princesses.

Bolkiah is considered one of the world’s richest men due to his 50-year rule over the oil-rich Brunei. In 2014 he introduced a strict sharia criminal code that includes severing of limbs and death by stoning for various crimes.

Born into a peasant family in 1951, Hun Sen was educated by Buddhist monks in Phnom Penh.

In the late 1960s, he joined the Communist Party and for a while he was even a soldier of the Khmer Rouge, Cambodia’s brutal regime from 1975 to 1979 under Marxist leader Pol Pot.

During Pot’s tyrannical regime, under which as many as two million people died and was considered as one of the worst mass killings in the 20th century, Sen fled to Vietnam to join its troops that will oppose the regime.

The Khmer Rouge government was overthrown in 1979 by Vietnamese troops, and when they installed a new government, Sen returned as minister of foreign affairs, and he later became Prime Minister in 1985 at the age of 33.

When he lost tin he 1993 elections, he staged a coup in 1997, forcing winning Prime Minister Prince Ranariddh to temporarily leave the country. Sen was next elected prime minister by parliament in July 2004, September 2008, and 2013.

The Prime Minister was married to Lok Chumteav Bun Rany. They have six children.

Sen is known to have forged links with China. He is also regarded as an authoritarian figure.

Widodo, also known as Jokowi, is a former entrepreneur and governor of Jakarta, who is considered a stark contrast to Indonesia’s previous prime ministers. In July 2014, he became the first Indonesian president who did not have a military background or did not belong to one of the country’s prominent political families.

Being a son of a wood-seller, much of Widodo lived his childhood in illegally built shacks near the city’s flood-prone Solo River.

He caught the attention not only of Indonesians but also of foreign spectators with his populist style of campaigning and his anticorruption platform.

He married Iriana Joko Widodo and they have three children.

His 2014 election victory had fueled hopes of a new era in the world’s third-biggest democracy, following dictator Suharto’s regime.

Thongloun Sisoulith has served as a deputy prime minister of Laos since 2001 and concurrently as minister of foreign affairs since 2006. He was born in Hua Phan province bordering Vietnam and China. He studied in the Soviet Union and is married to the adopted daughter of former revolutionary leader Phoumi Vongvichit.

Sisoulith’s earlier positions include deputy foreign minister, minister of labor and social welfare, and a member of the National Assembly.

In late January 2016, he was named as the new prime minister of Laos when outgoing prime minister Thongsing Thammavong announced that he was stepping down. He took his post in April last year after Lao’s National Assembly elections.

Sisoulith continued to lead one of Asia’s fastest growing economies of the last decade. But it remains notorious for rights abuses, endemic corruption and the state’s vice-like grip on the media.

Razak was appointed as Malaysia’s sixth Prime Minister on April 3, 2009. He succeeded Dato’ Seri Abdullah Ahmad Badawi who did not seek re-election as Umno President.

He was born in the district of Kuala Lipis in the state of Pahang and is the eldest son of the second Prime Minister, Tun Abdul Razak Hussein.

He is currently a governor at Asian Development Bank and International Monetary Fund. His political career began in 1976 when he was elected as the Member of Parliament for Pekan. Razak was 22 years old then and was the nation’s youngest member of Parliament.

He is married to Datin Sri Rosmah Mansor and they have five children.

Najib’s administration has been accused of involvement in the theft of billions of dollars from a state-owned fund, which he denies.

President Htin Kyaw was born in Rangoon, British Burma (now Myanmar), to the late Burmese scholar and poet Min Thu Wun and Kyi Kyi. He is a former political prisoner and Nobel laureate.

He studied at the Rangoon Institute of Economics and graduated with a degree in economics and statistics. He started working as a teacher while studying toward his master’s degree.

In 1975, Kyaw joined the Ministry of Industry 2 as deputy division chief. In 1980, he was appointed as a Deputy Director in the Foreign Economic Relations Department, Ministry of Planning and Treasury, and resigned from government service in 1992.

He has been married to Su Su Lwin since 1973. The couple have no children.

Sources: The Republic of the Union of Myanmar http://www.president-office.gov.mm/en/?q=administration/president/id-6359, Agence France-Presse

Rodrigo Roa Duterte is the Philippines’ 16th President and the first who hailed from the southern island of Mindanao. He is a lawyer and one of the most longest-serving mayors in the country–serving Davao City for 22 years.

Duterte’s prominent campaign promise to wage a war against illegal drugs had been a controversial aspect of his candidacy. Until now, his government has been drawing the ire of some human rights group for allegedly perpetuating the killings of criminals and for allegedly conducting extrajudicial killings, which he and his allies repeatedly denied. He is also pushing for a federalism type of Philippine government.

The President is currently living with his common-law wife Cielito “Honeylet” Avanceña, a nurse, with whom he has one daughter named Veronica.

Loong became  Singapore’s third Prime Minister when he was elected in 2004, after he was treated for lymphoma in the 90s. He was born on February 10, 1952, his father is Singapore’s late founding father the famous Lee Kuan Yew.

Loong’s political career began in 1984 when he joined his father’s party, the ruling People’s Action Party. Later that year he was elected to Parliament and was also appointed minister of statein both the Ministry of Trade and Industry and the Ministry of Defense.

Before joining politics, he had served in the Singapore Armed Forces, retiring as a Brigadier-General.

Loong’s administration is admired for its economic success, but criticized by human rights groups for allegedly clamping down on political freedoms.

Prayut Chan-O-Cha is a former army chief who seized power in a 2014 coup after a decade of political turmoil. He is an ultra-royalist ally of Bangkok’s conservative elite, which allegedly has tried to tamp down a populist movement in the provinces loyal to ousted premier Thaksin Shinawatra.

He is married to Associate Professor Naraporn Chan-o-cha and they have two daughters.

He is the Top 3 member of the 12th Politburo. As a tradition in Vietnamese politics, Phúc is also a full member of the National Assembly, serving at its 11th, 12th, 13th and 14th terms.

Phuc is seen as a competent technocrat and a sturdy apparatchik in the conservative communist leadership.