Asean has done us good 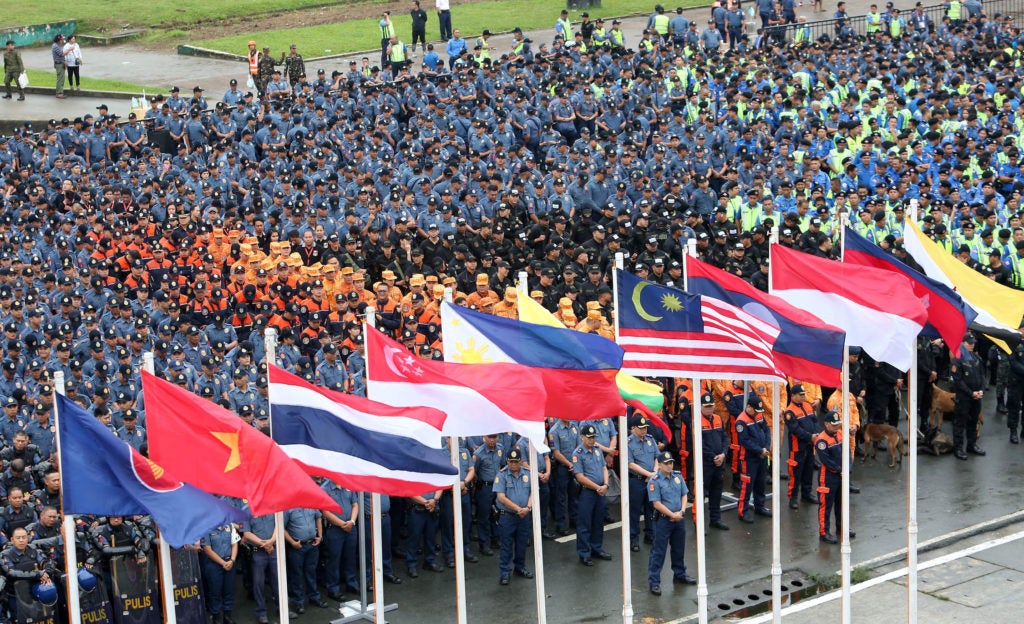 ASEAN SECURITY About 50,000 law enforcers from 21 government agencies, including the Philippine National Police and the Armed Forces of the Philippines,who will secure the 2017 Asean Summit, are given a ceremonial sendoff at Quirino Grandstand in Manila. —MARIANNE BERMUDEZ

When Asean was born in 1967, Philippine exports to its Southeast Asian neighbors amounted to a mere $62 million. With corresponding imports at $235 million, our total trade with Asean amounted to $297 million then.

Twenty-five years later (in 1992), our Asean exports had jumped ninefold to $556 million, and total trade with the region multiplied more than sixfold to $1.9 billion.

In that year, the Asean Free Trade Agreement (Afta) was signed, paving the way for even faster growth in trade across the region. As of last year, nearly another 25 years hence, our trade with Asean had grown further by 16 times, growing yearly at an average of 60 percent.

This far outpaced growth in our overall trade, which had expanded less than sixfold, or an average annual growth of 20 percent.

The Philippines is a founding member of Asean, and membership has clearly done us good. Asean as a bloc is now the country’s largest trading partner, accounting for 22 percent of our total trade, dislodging Japan and the United States, which now account for less than 15 percent each.

Our manufacturing exports to Asean have surged since the early 2000s as almost all import tariffs fell to zero in 2010 for the six leading members.

Our exports to China also zoomed after the Asean-China Free Trade Agreement took effect in 2010—yet another boon from our Asean membership.

Propelled by surging exports to Asean, China and the rest of the world, the manufacturing sector has seen resurgence in the last 7 years, growing at 7-8 percent annually and outpacing the overall economy.

The Philippines has come a long way over the five decades since Asean started, and in the 25 years since the launch of the Afta.

With Afta further pushed forward into the Asean Economic Community, the aim had always been to foster closer cooperation and regional economic integration through liberalized trade and investment among member-economies.

Back in 1992, skeptics doubted the usefulness of pursuing Afta at all.

They reasoned that the six member-economies then—Brunei, Indonesia, Malaysia, the Philippines, Singapore and Thailand—produced largely similar products, leaving little scope for wider trade among themselves.

Rather than complement one another through trade, the members would more likely compete with each other, they thought.

They were to be proved wrong, as the numbers already cited show. The steep rise in trade within Asean has been the result of its deliberate moves to establish international and regional production networks through cross-border investment schemes.

These included the Asean Industrial Joint Venture and Brand-to-Brand Complementation schemes, along with other programs established purposely to create value chains that span national borders within the region.

With Asean, the largest share of our trade is in intermediate goods—a reflection of our strong integration into the regional production networks and value chains, where products are completed across national borders.

The principle underlying this approach is simple enough. Rather than have each member set up its own complete manufacturing industry for a complex product like appliances or transport equipment, each would do better by specializing in particular components, thereby being able to serve a much larger market beyond its own.

In so doing, everyone benefits from lower unit costs made possible by larger volumes of production, in what is known as economies of scale.

Cars or appliances cost much less if produced under such regional or international production networks, instead of each country insisting on having its own complete car or appliance industry covering the entire value chain.

Proactive firms in countries around the region have pursued such strategic cross-border investments and partnerships, establishing regional and global value chains made easier by freer trade.

The benefits go beyond manufacturing, and they have been reaped by agribusiness firms as well.

Companies like Thailand’s Charoen Pokphand (CP) and Betagro, Malaysia’s Leong Hup and QL Resources, and the Philippines’ Oishi (Liwayway) and Jollibee have tapped tremendous cross-border opportunities in the region and beyond.

In doing so, they help supply the growing local markets of the host countries, with little or no trade impact from competing finished products.

They supply inputs like day-old chicks, feed components, vaccines and others from their home companies or subsidiaries elsewhere, exemplifying the same cross-border value chains seen more prominently in nonfarm-manufactured goods.

Even in rice, regional integration of value chains has begun with significant cross-border investments in mills and processing plants, thereby fast transforming upstream and downstream segments of the rice supply chains.

Filipino agribusiness firms would do well to shed their traditional inward-looking and defensive postures, and tap regional cross-border opportunities to produce more rice for Filipinos, and more besides.

Even as a founding member of Asean, the Philippines has yet to take fuller advantage of opportunities for economic synergies through regional production networks and value chains.

Whether in manufacturing or in agriculture, the Asean Economic Community can set us on new directions that could lead our economy to grow in a way that benefits all, and leaves no one behind. But we must be proactive and creative, not defensive, in engaging Asean.