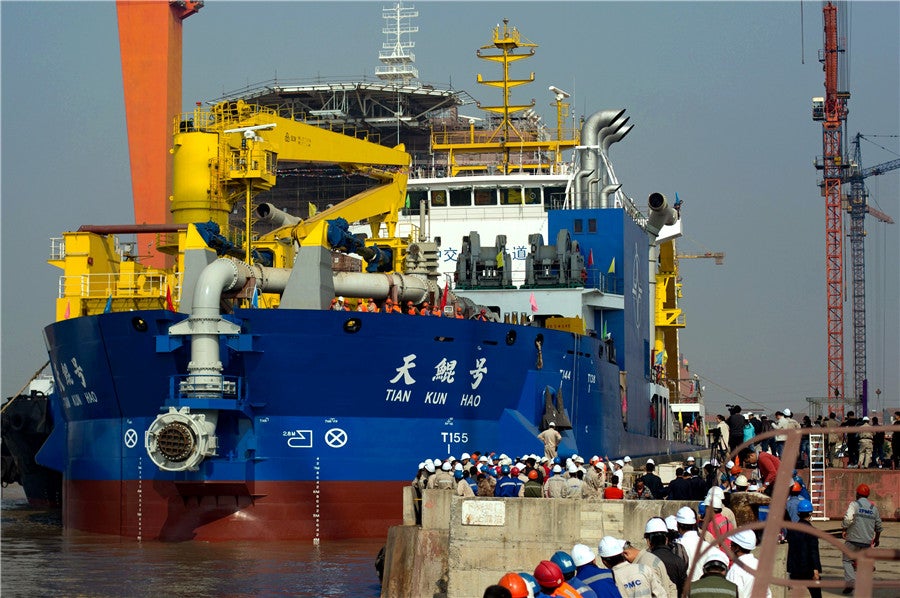 Full displacement of the Tiankun: 17,000 metric tons Length: 140 meters Capability: Can dredge up to 6,000 cubic meters of sand or clay per hour from a depth of 35 meters

BEIJING – China launched Asia’s largest and most advanced cutter-suction dredger, which can further enhance the nation’s capability in land reclamation, on Friday.

The Tiankun was moved to waters off a shipyard at Shanghai Zhenhua Heavy Industry Qidong Marine Engineering Co in Jiangsu province. Its construction started in early 2016 and will be completed in June, according to a statement sent to China Daily by the Marine Design and Research Institute in Shanghai, the ship’s designer.

Engineers will test and fine-tune equipment already installed on the electrically powered, self-propelled vessel and continue installing other devices. Then the ship will conduct mooring and sailing tests before being commissioned to China Communications Construction Co’s Tianjin Dredging Co, it said.

The institute calls Tiankun “a magic island-maker” in the statement, explaining that it is the best of its kind in Asia. It can be used to conduct coastal/channel dredging and land reclamation operations even in bad weather at sea, it said.

With a full displacement of 17,000 metric tons, the 140-meter-long ship is capable of dredging as much as 6,000 cubic meters of sand or clay per hour from 35 meters below the water’s surface, a capacity that means it could dig three standard swimming pools in an hour. The vessel is equipped with one of the world’s strongest cutter-suction systems, with four types of cutters that can handle various seabed substances, including hard rock.

After sand, clay or scattered coral reef is drawn out of the waters, it can be conveyed to as far away as 15 kilometers from the ship, thanks to the world’s most powerful and longest conveyance system, according to the institute. The suctioned substances can be piled up to form new land.

The ship is highly automated: Its computers can operate and monitor the ship’s equipment without manual manipulation, thus boasting a higher level of efficiency compared with similar vessels, the institute said.

Currently, the largest cutter-suction dredger in operation in Asia is Tianjin Dredging Co’s Tianjing, which was jointly designed by Chinese and German engineers. It can handle 4,500 cubic meters of substance each hour from 30 meters beneath the surface.

There are only four countries in the world — China, the Netherlands, Belgium and Germany — that are able to develop cutter-suction dredgers, the most technologically sophisticated ship used for marine engineering, said Fei Long, deputy chief designer at the Marine Design and Research Institute.

“The development of Tiankun indicates that we have become one of the leaders in the marine engineering sector,” he said.