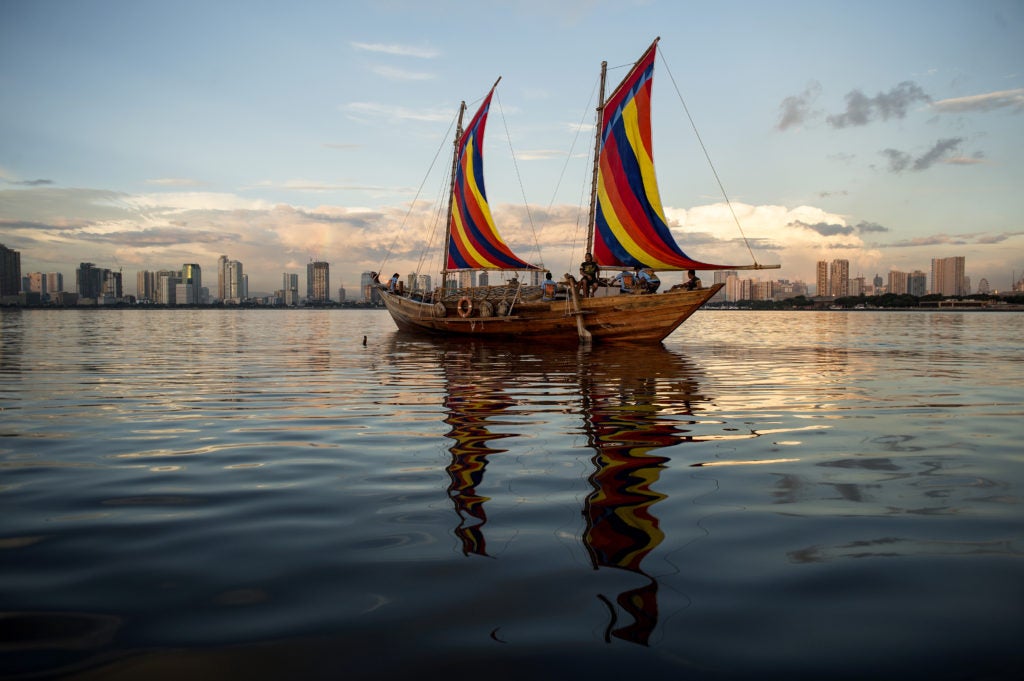 This picture taken on October 6, 2017, shows a traditional Philippine wooden boat known as balangay sailing in Manila Bay.
After conquering Mount Everest, Philippine adventurer Carina Dayondon is set to sail to China aboard a wooden replica of the ancient boat in the hopes of boosting national pride in a forgotten maritime prowess. Dayondon is planning to sail from Manila to southern China in early 2018, recreating trade and migration voyages made before Spaniards colonized the Philippines in the 1500s. (AFP PHOTO / NOEL CELIS)

After conquering Mount Everest, Philippine adventurer Carina Dayondon is set to sail to China aboard a wooden replica of an ancient boat in the hopes of boosting national pride in a forgotten maritime prowess.

Dayondon is planning to sail from Manila to southern China by early 2018, recreating trade and migration voyages made before Spaniards colonized the Philippines in the 1500s.

“People tell me I am crazy. They ask: ‘Wow, why climb Mount Everest? Why go to China on this tiny thing,'” Dayondon told AFP in Manila Bay aboard one of the two boats that will make the expected six-day sailing journey.

“I’m excited because our team will be more inspired realizing how good our forefathers were. We have to let people know we should be proud of being Filipino,” the 39-year-old added.

Dayondon, a petite but muscular coast guard officer, created history in 2007 when she and two other women became the first Filipinas to reach the summit of the world’s highest mountain.

Arturo Valdez, who led their Everest support team, is also heading the sailing mission and similarly sees the journey to China as a chance to inspire Filipinos.

“Like Mount Everest, I want this to be symbolic of what our people can accomplish, of what can be possible out of the so-called impossible,” Valdez, 69, said.

“Early trade with China and Southeast Asia was made possible by watercraft,” Ligaya Lacsina, researcher at the National Museum’s maritime division, told AFP.

“Europeans during the colonial period were effusive in their praise of Southeast Asian boat-building skill. But somehow we’ve paid very little attention to this,” Lacsina said.

Tribal boat-builders from the southern Philippines, where the boats originated, have made the replicas of the balangay using skills passed on down the generations.

The boats – 18 meters (60 feet) long by three meters (10 feet) wide – are made of hardwood planks and include two sails, two rudders, and a roofed area.

Their journey to the southeastern Chinese city of Quanzhou will be about 1,000 kilometers (600 miles), and the crew members are aiming to do it with as little modern technical help as possible.

“We have no night-sailing capability so we can be run over by a super tanker. That’s my fear. The greatest difficulty of replicating an ancient voyage is modernity because there are new port protocols,” Valdez said.

“This kind of boat is being treated as a maritime hazard,” he added. 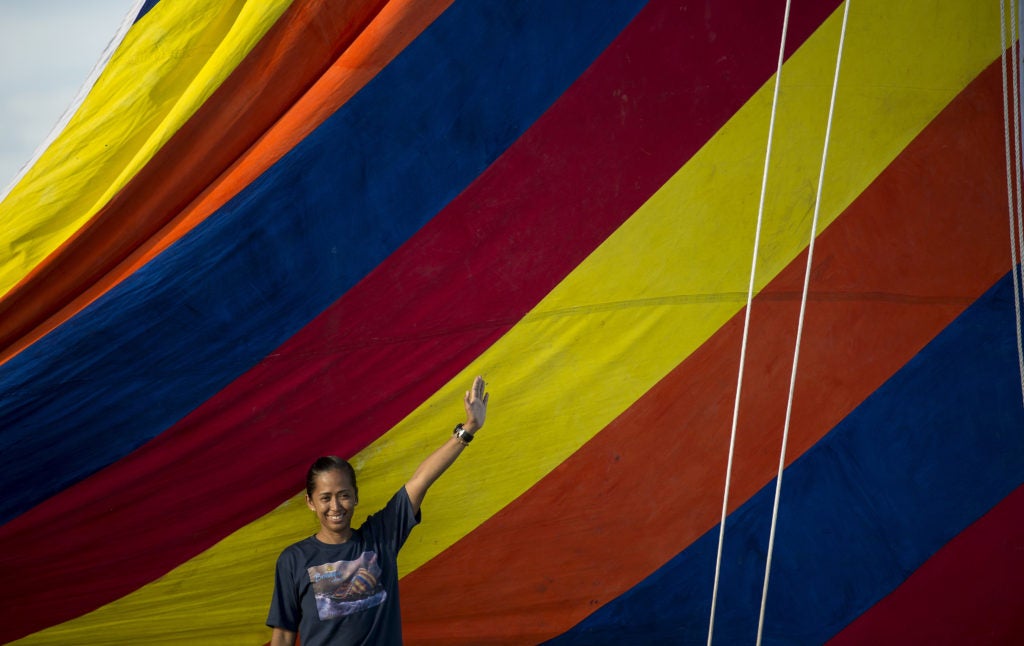 This picture taken on October 6, 2017, shows Philippine adventurer Carina Dayondon waving aboard a traditional Philippine wooden boat known as balangay, in Manila Bay. She plans to sail to China aboard the ancient boat in early 2018. (AFP PHOTO / NOEL CELIS)

‘Spirit of a nation’

Daily life aboard the boat is a struggle, according to Dayondon.

“We sleep anywhere because we don’t have quarters. We have no toilet. We just hold the rope and use a harness and do the proper position so we don’t fall,” she said.

Nevertheless, a third boat with a motor will accompany the balangays otherwise they will not be allowed into Chinese ports.

Their trip is planned to commemorate a journey made about 600 years ago by a sultan from the southern island of Sulu who went to China to pay tribute to Ming Dynasty rulers there, but who died of an illness on his way home.

The voyage to China will be the team’s second maritime quest following a 17-month journey that began in 2009 around Southeast Asia.

One of the group’s biggest challenges is off the water – finding enough money to fund the adventure.

The team members plan to open the vessels to the public for educational tours and even wedding shoots to raise money for their upkeep in Manila Bay.

Valdez, who also shepherded the first Philippine men up Mount Everest in 2006, said he hoped the government would financially back such feats but they had not.

“Filipinos love us when we climb Mount Everest, love us with our exploits but they are not willing to pay for that. And that makes us a poorer nation,” he said.

“Blazing a trail and going beyond what is normal; that is the spirit of a nation. That is how you build a nation, out of a dream,” Valdez also said.           /kga