Indonesian with alleged IS ties nabbed in Marawi 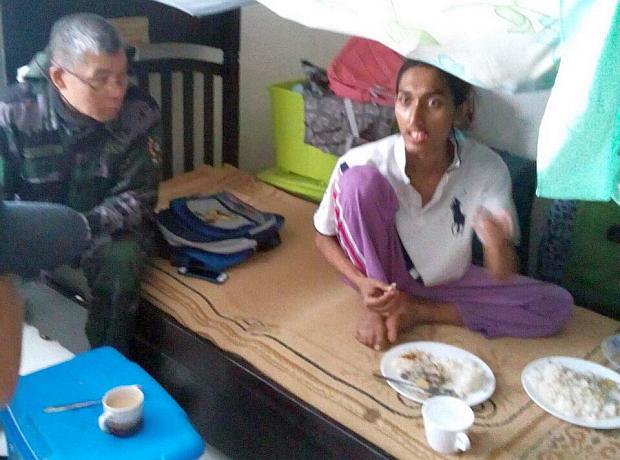 MARAWI CITY – An Indonesian was arrested here on Wednesday as he tried to escape from what used to be the main battle area during the siege started on May 23 by Islamic State-inspired terrorists, authorities said.

The Indonesian, identified as 23-year old Mohamadin Ilham Syaputra, was arrested a day after soldiers also killed a straggler who was trying to escape from the former battle area.

Foreign fighters were believed to have fought side-by-side with local terrorists in the past five months.

Over 900 terrorists, 165 security forces and 45 civilians were killed, while more than 400,000 residents were displaced from the battle between government troops and ISIS-inspired terrorists.

Syaputra was soaking wet from swimming across Lake Lanao to Barangay Luksadatu when spotted by members of the Barangay Peacekeeping Action Team (BPAT) around 7 a.m.

He was then turned over to the Marawi City Police Station.

“He is now being investigated by military and police investigators,” Col. Romeo Brawner Jr., the deputy commander of the Joint Task Group Ranao, said.

When caught, Syaputra, who was carrying a grenade, introduced himself as a member of the military intelligence community, according to Senior Supt. John Guyguyon, chief of the Lanao del Sur Police Provincial Office.

The suspect spoke fluent Filipino, claiming he was a resident of Cagayan de Oro, Guyguyon added.

But BPAT members had become very suspicious of him.

Guyguyon said Syaputra had confessed to being an IS militant who came to the Philippines in 2015.

“Yes, he is an IS supporter,” Brawner confirmed.

Guyguyon said the Indonesian had admitted participating in various IS operations, including the clash between government forces and IS-inspired gunmen in Piagapo, Lanao del Sur in April – about a month before the Marawi siege started on May 23.

At least 36 of his colleagues died in that April clash.

Piagapo is about 33 kilometers from here and was believed to be among areas where the Maute brothers had prepared for the launching of the siege here.

He decided to call it quits

According to Guyguyon, Syaputra also spoke of other remaining fighters inside Marawi, some of whom were foreigners too.

He said the Indonesian decided to call it quits and tried to escape.

“He had to kill two gunmen with him because they would not want him to leave,” Guyguyon added.

“He was noticed by our village marshals because he was wet,” Moxir said. “He later admitted that he was among the foreign fighters from the frontline.”

Moxir said the suspect swam in the lake to Loksadatu.

Seized from Syaputra was the grenade he was carrying and some cash.

Zia Alonto Adiong, the spokesperson of the Lanao del Sur crisis management committee, said Syaputra’s arrest validated the position of local officials that civilian participation was “essential in our collective effort to secure our communities from terrorist elements.”

“Crucial in our security effort to fully restore normalcy in the controlled area is to maintain vigilance by our residents,” Adiong said. “We must develop and strengthen the civilian security plan as proposed by the Provincial Peace and Order Council of Lanao del Sur to inspire further people’s initiative in order to compliment our state forces’ on-going clearing operation down to the barangay level.”

With Syaputra’s arrest and the killing of another militant on Tuesday, Brawner said the conduct of the mopping up and clearing operations had been justified.

He said aside from stragglers, unexploded ordnance and booby traps continue to pose threat to residents, who would soon be returning.

On Monday, Brawner also reported that four soldiers were injured by exploding improvised explosive devices (IEDs) as the military continued to conduct mopping up and clearing operations here.

He said the government troops were conducting mopping up and clearing operations inside former battle areas on Oct. 29 and 30 when the explosions took place.

Brawner said the booby traps were laid down by Maute gunmen at the height of the fighting.

He said the injured soldiers were among those trying to clear buildings previously occupied by the gunmen in preparation for the return of displaced residents.

“They were injured by shrapnel from exploding IEDs,” he added.

Brawner said even with the defeat of the Islamic State-inspired militants here and the deaths of the last militants on Oct. 23, danger continued to lurk in every nook and corner of the previous battle areas because of unexploded ordnance and booby traps the defeated militants had left behind.

Lt. Col. Manuel Garcia, the commander of the Army’s 4th Civil Relations Group, said the military also continued to dispose of IEDs that troop had recovered from previous battle areas.

Garcia said some bombs left behind by the militants and unexploded ordnance were being safely detonated because it would be more dangerous to pluck them out of areas where they had been found.

This, he said, explained explosions being heard inside the former battle areas even days after the fighting had stopped.

“We continue with the clearing operation and the explosions were from unexploded ordnance and bombs being disposed of,” Garcia added.

In all, he said, the military had recovered 2,000 IEDs from the former battle areas. /je /atm