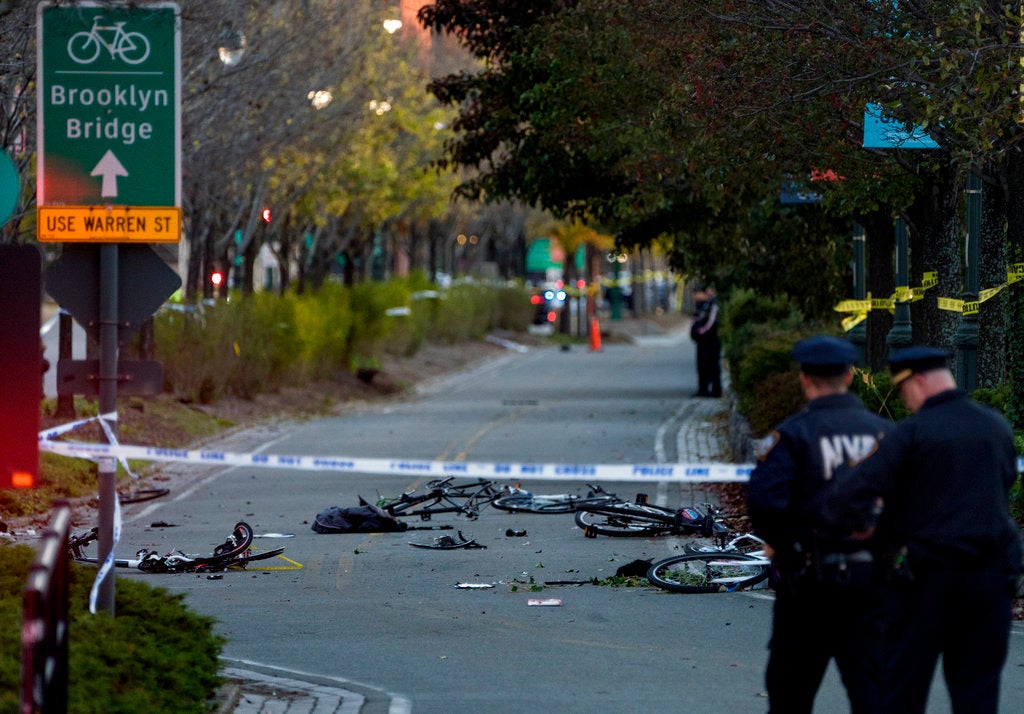 Bicycles and debris lie on a bike path after a motorist drove onto the path near the World Trade Center memorial, striking and killing several people Tuesday, Oct. 31, 2017, in New York. (AP Photo/Craig Ruttle)

No Filipinos have been reported killed or hurt after a pickup truck rammed into pedestrians and cyclists along a bike path near the World Trade Center (WTC) memorial in New York City, United States on Tuesday, the Department of Foreign Affairs (DFA) said.

“The Philippines extends its deepest sympathies and is one with the United States Government and the American people in condemning this unspeakable act of terror,” DFA Secretary Alan Peter Cayetano said in a statement issued on Wednesday.

Eight people were killed while 11 others were injured in the truck attack at Lower Manhattan. The 29-year-old driver of the rented pickup truck was shot by responding policemen, and eventually placed under custody on Tuesday afternoon.

The Philippine Consulate General in New York has issued an advisory for Filipinos to stay away from the scene of the incident at Chamber and West Streets.

“We are in touch with the New York Police Department and so far, we have not received reports of any Filipino among the dead or injured,” said Consul General Maria Theresa Dizon-De Vega.

She urged Filipinos to exercise caution if they would still want to participate in the annual Halloween parade held four hours after the incident at Greenwich Village, about 1.6 kilometers away from the scene of the crime.

Meanwhile, Malacañang also extended its condolences to the families of the victims killed in the deadly incident.

“We express our deep sympathies to the families and friends of the innocent victims killed in a truck attack on a New York bike path,” Communications Secretary Martin Andanar said in a statement issued on Wednesday.

“The Philippine Consulate General in New York is closely monitoring the situation and has advised the members of the Filipino community in the area to remain calm yet vigilant even as there are no reports of Filipinos injured in the truck attack,” Andanar added.  /kga