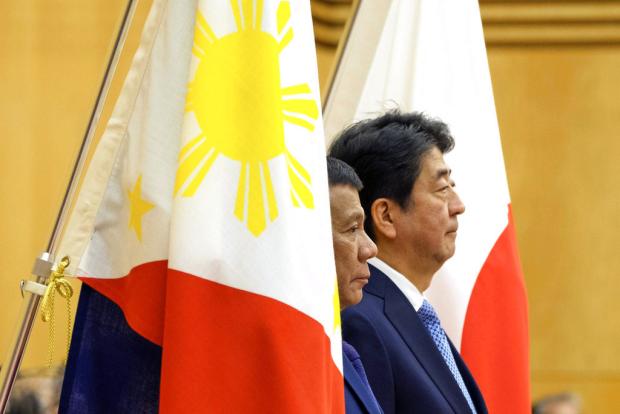 Philippine President Rodrigo Duterte (left) and Japanese Prime Minister Shinzo Abe stand between their countries’ flags as they review a guard of honor at Abe’s official residence in Tokyo on Monday, October 30, 2017. Duterte is on a two-day visit to Japan. (Pool photo by NICOLAS DATICHE via AP)

Tokyo – The Japanese government is providing the Philippines with a 114 billion yen loan for the Metro Manila Subway Project and the construction of a bypass road in Bulacan in order to ease traffic congestion woes in the areas.

Prime Minister Shinzo Abe pledged the loans during his meeting with President Rodrigo Duterte on Monday, according to a statement from Japan’s Ministry of Foreign Affairs.

The Philippines and Japan will sign an exchange of notes for the yen loan in the future.

The Phase 1 of the Metro Manila Subway Project is expected to help address Metro Manila’s serious traffic congestion problem, as well as ease pollution and mitigate the effects of climate change.

The bypass road project in Bulacan is also anticipated to reduce traffic gridlocks around Plaridel City. The bypass road will be constructed along the Philippine-Japan Friendship Highway, which connects Metro Manila with Central Luzon.

Duterte and Abe witnessed the signing of the documents.     /kga