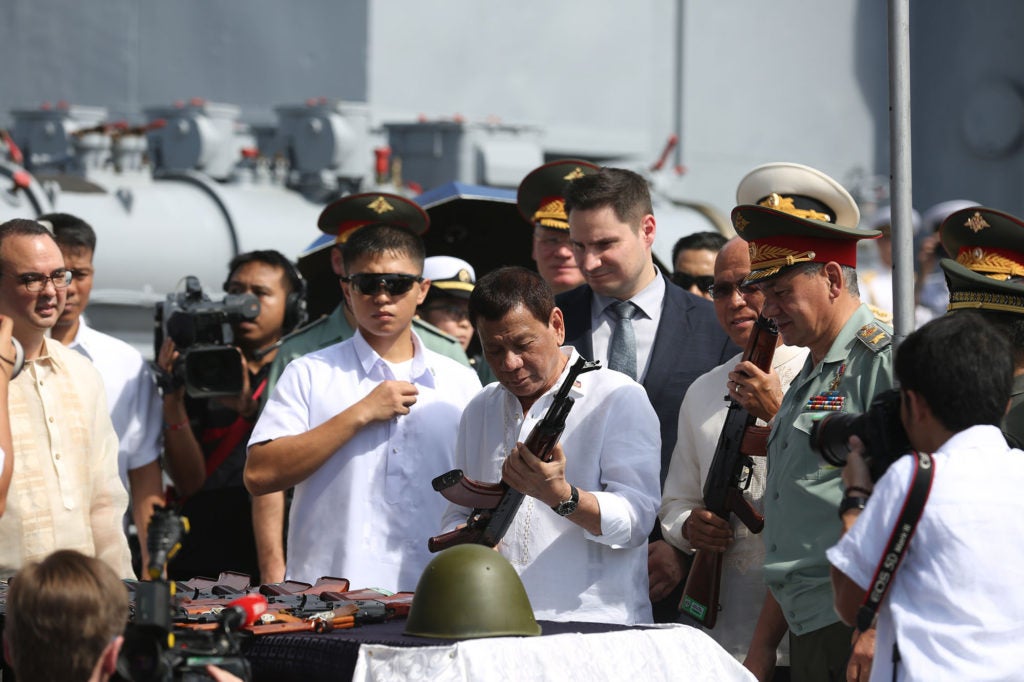 MILITARY TIES President Duterte checks the features of the Russian firearms during the turnover ceremony at the Manila Port. With him is Russian Defense Minister Sergei Shoigu. —JOAN BONDOC

President Rodrigo Duterte witnessed the turnover of 5,000 Russian rifles and other defense equipment in Manila on Wednesday, which came on the heels of the signing of an agreement between Manila and Moscow to boost military ties.

Mr. Duterte and Russian Defense Minister Sergei Shoigu stood as observers as defense officials of the two countries signed the deed of donation for 5,000 Kalashnikov assault rifles, 1 million rounds of ammunition, 20 multipurpose vehicles and 5,000 steel helmets to the Philippine military.

China had earlier donated thousands of assault and sniper rifles to the Philippines in a similar gesture of friendship.

Before the turnover of the Russian equipment, Mr. Duterte toured the Admiral Panteleyev, an antisubmarine warship and one of three Russian Navy ships docked in Manila. He checked out its features and was also shown several types of firearms.

It was the Russian Navy’s third visit to Manila. In all instances, the President toured the docked vessels.

In January, he boarded the Admiral Tributs, an antisubmarine vessel. In April, he toured the guided missile cruiser Varyag.

In both instances, Mr. Duterte spoke of closer ties between Manila and Moscow. In January, he asked Russia to be the Philippines’ ally and to protect it, while in April, he said he

would not be afraid because the Russians were with him.

He did not talk to reporters when he visited the Admiral Panteleyev on Wednesday.

The turnover of the Russian defense equipment came a day after the Philippines and Russia signed two agreements on the sidelines of the meeting of defense ministers of the Association of Southeast Asian Nations in Clark, Pampanga.

Lorenzana and Shoigu signed an agreement for military and technical cooperation, which provides for collaboration on research, production support and the possible exchange of experts and training of personnel for joint programs.

A contract for the Philippines’ procurement of defense articles from Rosoboronexport, a Russian state-owned company, was also signed by Lorenzana and Rosoboronexport director general Alexander Mikheev.

“The Philippines is considered to be (a) key and prospective partner in Southeast Asia and Asia-Pacific rim in general,” the Russian defense ministry quoted Shoigu as saying in a statement, adding it was the first time a defense minister from Moscow had visited the Philippines.

Mr. Duterte has been making friendly overtures to Russia and China while distancing the Philippines from the United States, its traditional defense ally, in the wake of criticisms in Washington about the human rights situation in the country.

He visited Russia in May but had to cut short his trip because of the outbreak of violence in Marawi City.

But before leaving Moscow, he was able to meet President Vladimir Putin and asked for a “soft loan” to buy firearms because the United States canceled the Philippines’ planned purchase of guns from it.

Esperon said on Wednesday  that the Philippines’ defense cooperation with Russia provided diversity to the training that military personnel were getting.

“We get more exposure to different technologies as well as techniques. So that should be a welcome addition,” he told reporters.

Asked if he saw no repercussion on the Philippines’ alliance with the United States, Esperon said the partnership “stays as strong as it is.”

“It is very healthy that we talk to all our neighbors and friends and allies all at the same time,” he added. —With a report from AFP