Asia’s least and most stressful cities 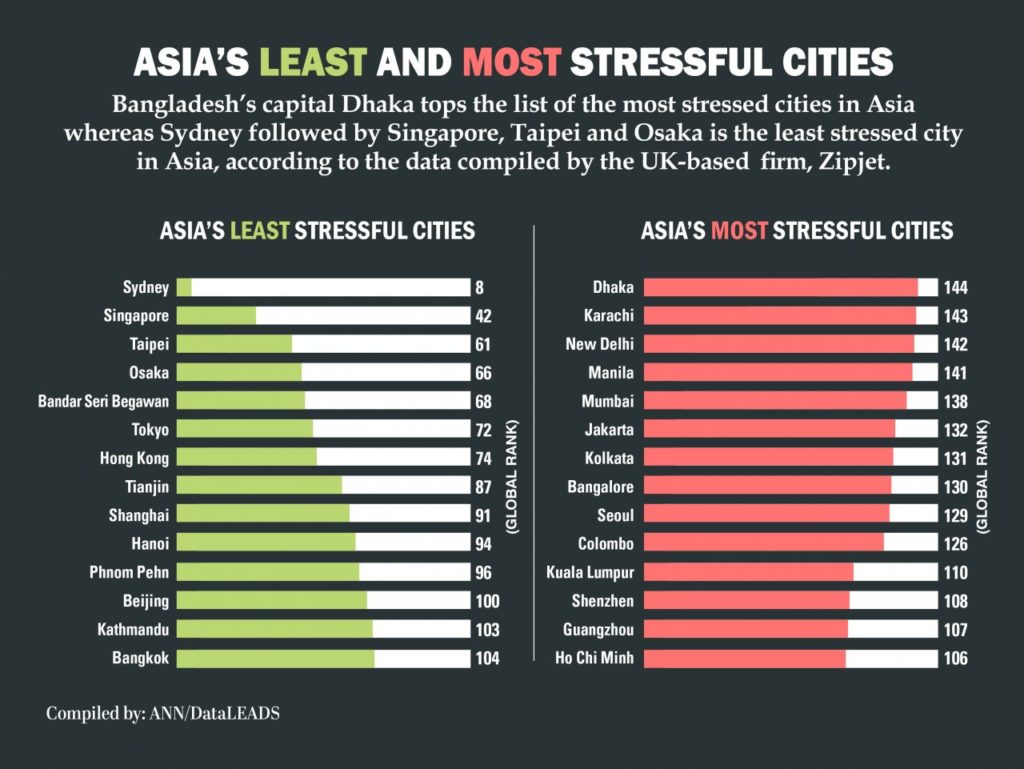 A recent study done by Zipjet across 500 locations projects most Asian cities as stressful places to live in. The factors taken into consideration to derive the ranking are many; air pollution, gender equality, unemployment, mental health and even the amount of sun that a city gets.

With global ranking of 144, Dhaka is the seventh most stressed city in the world and one of the most stressed cities in Asia. Dhaka is considered a stressful city for being densely populated and having worst traffic congestion. The city’s mental and physical health is also ranked poorly.

Scoring poorly on various factors like light pollution, debt per capita and social security, Karachi is ranked at 143. With poor score across the spectrum, the metropolitan Indian city, New Delhi has also landed a sweet spot in the most stressed cities in the World. The other Indian cities are Mumbai and Bangalore with global ranking of 138 and 130 respectively.

The rapid urbanization in Manila has led to fewer green spaces in the city which has reduced the air quality as well. The city ranks badly in mental health also since suicide rate in Manila is high. The study also takes into consideration the public transport woes of the city which contribute to the stress of the commuters.

While many call Seoul a happy city, the study states otherwise.

With the income gap being worst in Asia-pacific the physical health of the city is a determining factor is making it one of the stressful cities in Asia. Kuala Lumpur is ranked at 110 with Ho Chi Minh at 106.

Singapore is one of the least stressed cities in Asia with Global ranking of 42. With a thriving economy and one of the world’s finest public transport, the habitants of the city are happy to live in it.

Brunei ranked at 68 is the eighth least stressed city in Asia. Due to being less densely populated the per capita debt of the country is very low. The country scores high in race equality and financial security.

Tokyo ranked at 72 has scored well on public transport, traffic situation in the city and perception of social security. Hong Kong has scored well on perception of security among the people living there and the physical health of the city. Shanghai has very low debt per capita which makes the city financially secure and the citizenry less stressed.

Beijing, globally ranked at 100 has a low unemployment rate as well as debt per capita. Perception of security amongst the citizens contributes to the city being less stressful compared to other cities. However fewer green spaces, public transport woes and population density dragged the ranking of the city down.

Kathmandu at 103 global rank is comparatively better than many Asian countries. Bangkok has a very low unemployment rate and scores well on physical health and noise pollution as well.