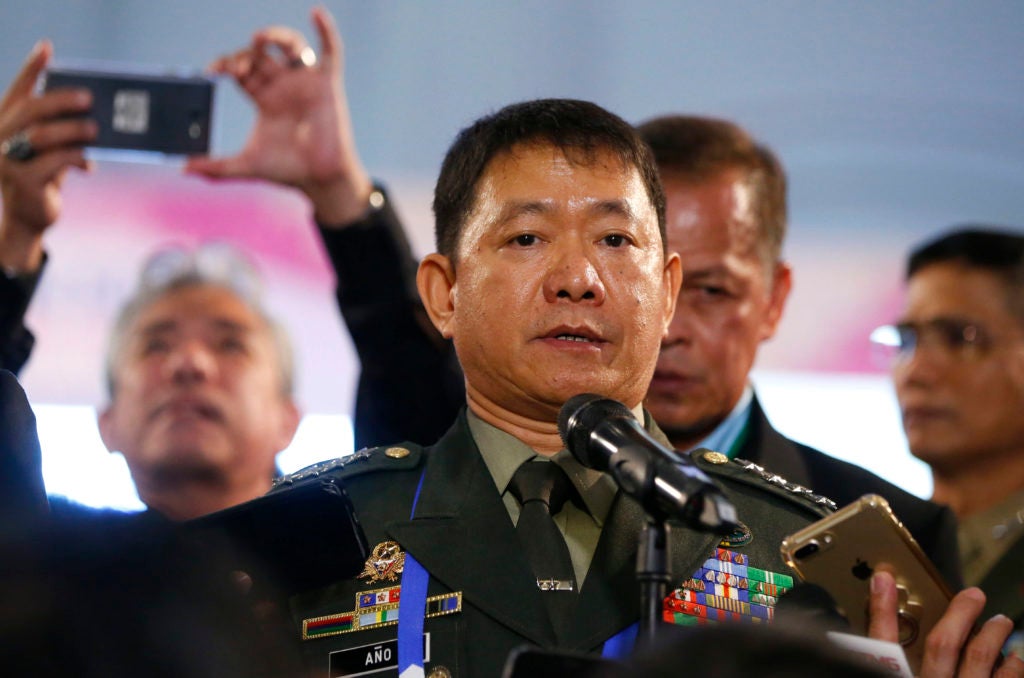 Philippine Armed Forces Chief Gen. Eduardo Ano talks to reporters shortly after announcing, together with Defense Secretary Delfin Lorenzana, that Philippine troops have captured a building where pro-Islamic State group militants made their final stand in southern Marawi city and recovered bodies of suspected gunmen inside at the the ASEAN Defense Ministers’ Meeting in Clark, Pampanga province, north of Manila. The Philippine military chief says the Islamic State group sent at least $1.5 million to finance the recently ended siege of the southern Philippine city of Marawi, with the assault leaders using the 2014 IS seizure of the Iraqi city of Mosul as a blueprint. Gen. Eduardo Ano told The Associated Press in an interview late Monday, Oct. 23, that the battle defeats of the IS in Syria and Iraq, and now the IS-aligned gunmen in Marawi, showed a major vulnerability of the extremists. (AP Photo/Bullit Marquez, File)

CLARK FREEPORT — The Islamic State (IS) group sent at least $1.5 million to finance the recently ended siege of Marawi City, with the assault leaders using the 2014 IS seizure of the Iraqi city of Mosul as a blueprint, according to Gen. Eduardo Año, chief of staff of the Armed Forces of the Philippines.

The battle defeats of the brutal group in Syria and Iraq, and now the IS-aligned gunmen in Marawi, however, show a major vulnerability of the extremists: Their audacious territorial occupations tend to crumble over time as they’re cornered in urban settings by the relentless firepower of US-backed offensives, Año said in an interview with The Associated Press late Monday.

The counterterrorism victories have given governments confidence that IS—which shocked the world with its rise a few years ago—could be stopped and defeated, said Año, who oversaw the military campaign that ended the five-month siege in Marawi this week.

“They underestimated the reaction of the different countries in the world, the alliances,” he said.

Recipe for fighting IS

“With what happened in Mosul, the Philippines and Raqqa, the different countries are now confident that if ever an Isis siege would erupt … they now have the recipe or the formula to fight it,” Ano said, using another name for IS.

He added that the Philippine military was ready to share its battle experiences in mosque-studded Marawi.

The siege, which was launched on May 23, left more than 1,100 combatants and civilians dead, including more than 900 militants, and displaced some 400,000 residents, including the entire population of Marawi, a
bastion of the Islamic faith in the predominantly Roman Catholic Philippines.

It was one of the most devastating urban fights the country has witnessed since World War II, Año said.

Like in Mosul, the black-flag waving militants plotted to launch the Marawi siege on the first day of Ramadan, the holy Muslim month of fasting, but they were forced to stage the attack prematurely after Philippine Army troops raided the hideout of its leaders.

They also took hundreds of hostages as human shields and employed snipers to slow the advance of the military, Año said.

“Every day, they watched videos of Isis in Mosul,” Año said of the Marawi siege leaders, including Isnilon Hapilon, a top Asian terror suspect who was killed by Filipino troops last week.

“That was their blueprint, that was their pattern,” he said, adding that troops recovered IS video discs of the Mosul violence in captured militant positions in Marawi.

It took about three weeks for thousands of government forces, which have been battling insurgents in jungle settings, to adopt to the urban fighting, Año said.

Two battalions of Marines, for example, got stuck in a beach until a combat engineering battalion was quickly organized to clear mounds of debris that allowed them to move inland.

The massive offensive led to the killings of at least 10 key terror suspects from different extremist groups that have pledged allegiance to IS, including Hapilon, four siblings belonging to the local Maute clan, and Indonesian and Malaysian militants, he said.

It would have taken five to 10 years for troops to hunt down and find all those militant leaders in the jungles of the south, where Año said the extremists had mastery of the terrain and support from local clans.

The leaders of the bloody insurrection, who came from different ethnic backgrounds, were linked by their desire to be recognized by IS as its Southeast Asian branch and obtain funding from the Middle East-based group.

When the militants forged an alliance, IS sent $1.5 million in batches to finance the attack, Año said, citing intelligence information, including some provided by the United States.

But Año said the Marawi militants, like their Middle East counterparts, were blindsided by their ambition and miscalculated the response to their plot, which involved the seizure of a military camp in Marawi.

“They thought that they can get the helicopters and armored vehicles and the people of Marawi will protect them, and there will be a flag flying and they can call it their own, an enclave, and probably more foreign fighters will come,” Año said.

Tens of thousands of Marawi residents, however, abandoned the city in panic and troops managed to secure Marawi’s military camp and other vital areas.