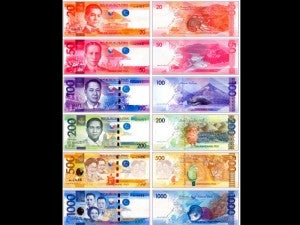 MANILA, Philippines—The series of new peso bills, which was vilified after its launch last December for a mislocated map, a wrong-colored beak of a bird, among  other errors, has been judged as one of the best currency series in the world in an international design competition.

The set of new peso notes, called the “New Generation Currency (NGC)” series, was one of two finalists for best new currencies in the world in a worldwide contest organized by the International Association of Currency Affairs (IACA).

The contest is aimed at recognizing the best currencies that have been issued within the last 18 months. The currencies were evaluated on the basis of their design, including innovation and security features.

Besides landing as a finalist, the Philippines’ NGC was also given a special award for best security features. The new series of peso notes was cited for its optically variable device (OVD) patch, a feature of the new P500 and P1,000 bills.

This feature, which counterfeiters would find hard to imitate, is the reflective foil that bears the image of the Bangko Sentral ng Pilipinas (BSP) logo with a parrot in the P500 bill and the South Sea pearl inside a clam in the P1,000 bill.

The awards given to the Philippine currency were received by BSP Monetary Board Member Armando Suratos and BSP Deputy Governor Juan de Zuñiga at the award ceremony held earlier this month.

Diwa Guinigundo, the deputy governor who headed the committee in charge of the design of the new peso bank notes, said the BSP felt proud of the new series of peso notes because of its sophisticated features.

The recognition of the new peso notes as one of the best in the world came after they were roundly criticized when they were launched in December 2010.

The critics said the new peso notes had errors in design, and urged the BSP to recall the series.

Some of the errors cited were the allegedly inaccurately designed Philippine map and the wrong color used for the beak of the blue-naped parrot featured in the P500 note.

The BSP said what the critics were pointing out were not errors.

The map, which critics said mislocated the Tubbataha Reef by 400 kilometers and did not clearly show Batanes, was simply an artist’s rendition, the central bank said. The map need not be 100-percent accurate because it was an artistic depiction and not meant to be a navigational tool, it said.

As for the color of the parrot’s beak, which was rendered yellow in the P500 note when the actual color was red, the BSP said the inaccuracy was a consequence of printing-capability limitations. The printing of bank notes, unlike ordinary paper materials, had limited colors and the limitation did not allow the beak to be printed red, it said.

Instead of criticizing the peso notes, people should recognize the sophistication of the design, especially as far as security features were concerned, the BSP said.

For instance, the holograms and the embossed prints of monetary value in the peso notes made them difficult, if not impossible, to be imitated by counterfeiters, it said.

“NGC notes are beautiful. It is an elegant fusion of substance—the theme being what is the best and the brightest in the Philippines—and form rendered in a most artistic and tasteful fashion,” Guinigundo said.

“The jurors must have been impressed by the careful choice and use of cutting-edge security features that actually enhanced the color and thematic dimensions of our currency,” he said.

He said that besides being colorful, the new peso notes were durable  (with 20-percent abaca and durability features embedded in the paper manufacture) and clean (it has bioguard properties that resist bacteria and other microorganisms).

According to the central bank, between 400 million and 500 million of the new peso notes are already in circulation. The figure is estimated to hit 702 million by end-November.

Guinigundo said that despite this, there has appeared to be a scarcity of the new bank notes. He said this was because some people, when they get hold of a new bank note, tended to keep it as a souvenir.

“The artificial scarcity may be traced to the fact that some of our people don’t want to spend the NGC notes, they keep them as souvenirs,” Guinigundo said.

According to the BSP, more new peso notes will be printed over the next three years, in time for the demonetization of the old bank notes in 2014.