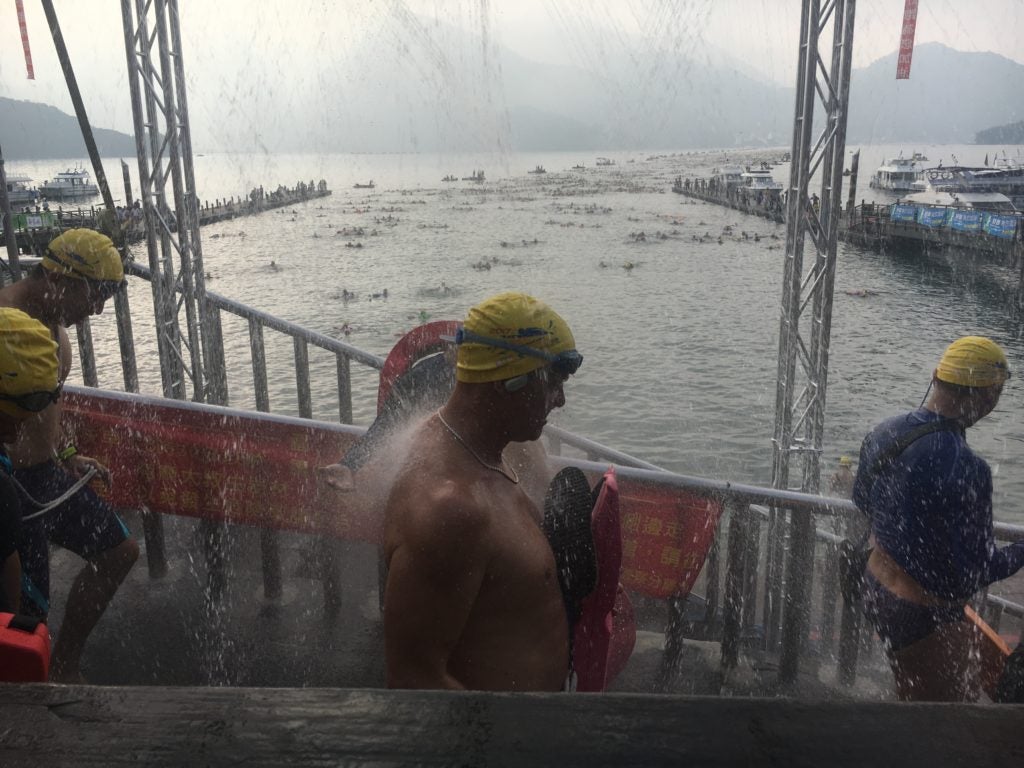 Swimmers shower before taking the plunge at the Sun Moon Lake during the Sept 24 swimming carnival that drew nearly 20,000 participants from 36 countries. Photo by TJ Burgonio/Philippine Daily Inquirer

TAIPEI — On a humid autumn Sunday morning in late September, thousands of swimmers from here, China and more than 30 other countries descended on the Sun Moon Lake for the annual swimming carnival.

An endless stream of swimmers, donning colorful caps, trunks and face masks, with floaters slung on their shoulders, or across their bodies, plunged into the cold waters of the lake up in the mist-covered alps of Nantou County in central Taiwan.

Crossing 3.3 kilometers of water from Chaowu Pier to Ita Thao Pier usually takes an hour — organizers claim it’s the longest in the world — but some did it leisurely, and for good measure, others snapped selfies with their sticks while in the water, raising safety concerns among organizers.

Crossing the alpine lake is a lifetime goal for many Taiwanese, and so it’s not uncommon to see kids tagging along with their parents, or older siblings during the event.

But for foreigners, swimming in the freshwater lake – so named because its east side resembles a sun, and the west side the moon — is a rare chance they couldn’t pass up. And it was no surprise that the 35-year-old festival drew close to 20,000 swimmers from 36 countries. Even former President Ma Ying-jeou joined the swim.

That day in September, the sea of colorful caps bobbing up in the clean, placid waters of the lake was a breathtaking sight.

It’s the kind of wonder that awaits visitors to the lake, a popular tourist destination that offers other ways of taking in the view: cycling around the lake, hopping into cable cars, and sailing on yachts. It can be reached by a bullet train from any of the key cities, and then an hour-long bus ride past lush mountain ranges, streams and quaint villages, through tunnels, up in the mountains of Nantou.

Very much like the swimmers, Taiwan government has taken the plunge and is paddling southwards to boost trade and cultural ties with 10 Southeast Asian countries, six South Asian neighbors, as well as New Zealand and Australia.

As it steps out of the shadow of mainland China, which treats it as a wayward territory, Taiwan launched last year its New Southbound Policy (NSP), with a new twist: it’s now demand-driven. Meaning, it identifies demands from partner-countries, and based on these, draws up projects of cooperation.

With the Philippines, its closest southern neighbor, Taiwan is eyeing a raft of projects in energy, agriculture and education, among others. People-to-people exchanges, particularly between Southern Taiwan University Alliance and the University of the Philippines, are ongoing.

But pending the signing of an agreement that would define the legal mechanism on how Taiwan could invest in the Philippines, given the latter’s one-China policy, the projects hang in the air. There is “huge room to grow” between the two countries, Y.C. Tsai, negotiator at the Office of Trade Negotiations, told a group of visiting Southeast and South Asian journalists. Bilateral trade has topped $10 billion in 2016, with the Philippines exporting over $2.2 billion worth of products to Taiwan, and importing $8.6 billion from its neighbor.

And only recently, officials announced that Filipinos could visit Taiwan up to two weeks without applying for visa during a nine-month trial period beginning Nov. 1 this year, as part of the policy.  That’s expected to lure more Filipinos to the island, and top the 172,475 arrivals in 2016.

“We try to be friendly with mainland China, but China is not our main market. We need to have market diversification; we need to make our outbound investment not only one way to go to China, but also going to Vietnam, Thailand, countries in Southeast Asia, such as the Philippines,” Dr. Chen-yi Lin, deputy minister of the Mainland Affairs Council, said by way of explaining the New Southbound Policy.

Even as it looks beyond its waters toward its neighbors, the self-ruled democratic country has also taken steps to embrace other nationalities, such as Indonesians, Vietnamese, Filipinos, Thais, and Cambodians, who have intermarried with the locals.

It has a center for immigrants to help them adapt to local culture, and in the long run, be integrated into Taiwanese society. 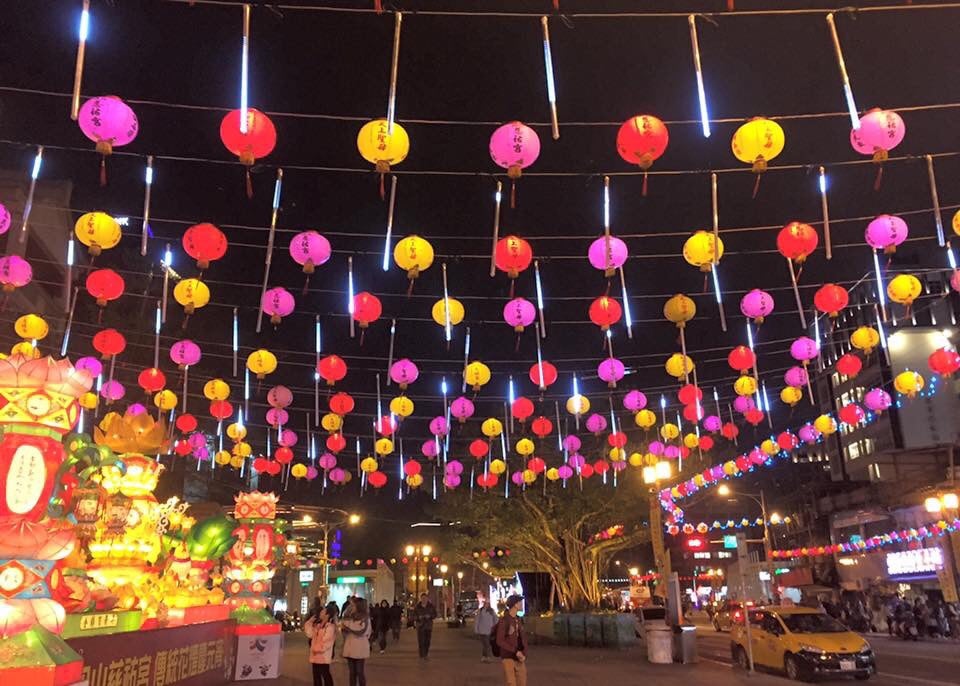 At the Wah-Hua New Immigrants’ Hall in Taipei, the immigrants are taught Mandarin, livelihood skills such as computer literacy, baby-sitting, hairdressing, and even financial management.

Its team of volunteers, including Filipino interpreter Angel Tan, even accompany the women to their job interviews and their kids to school, as nannies do in some countries.

At the time of journalists’ visit, there was an ongoing exhibit on herbs, plants and spices and staple food from Southeast Asian countries to acquaint second-generation children, or children of intermarriages, about their father’s or mother’s traditional cuisines.

“Did you know that kalachuchi can be deep-fried and eaten?” Tan, who grew up in Baguio City and is married to a Taiwanese, asked the journalists before showing them around the exhibit, “The Taste of Hometown: Southeast Asian Flavors,” at the National Taiwan Museum.

Kalachuchi is a variety of fragrant flowers that bloom during summer in the Philippines.

Given the growing Muslim population of its neighbors, Taiwan hopes to organize halal cooking courses, and identify halal-certified restaurants to better serve the Muslim visitors. Taiwan offers diverse gastronomic fare, either in swanky hotels, or local restaurants in downtown Taipei, reflecting the different cultures that diverge on this island.

It’s a country bound to its past, and at the same time, exploring new ways.

In Taichung City, the country’s second most populous city, one could savor tea prepared the traditional way – which involves a lot of pouring and sniffing – at the Wuwei Tea House, a cluster of old, two-story wooden houses built around a pond, and surrounded by towering buildings. And yet elsewhere in the city, one could order flavored milk tea at Chun Shui Tang Tea House, thanks to its owner who got the idea from a trip to Japan where coffee was served cold.