Filipino among those killed by California wildfires — DFA 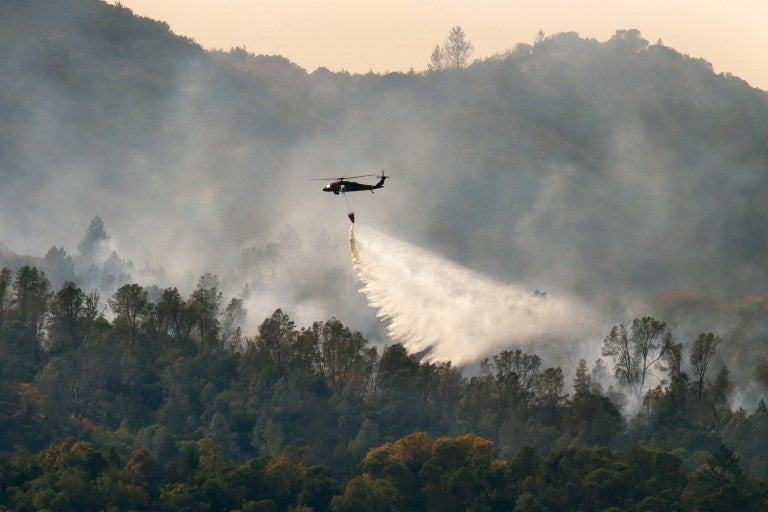 A tanker helicopter drops water on a wildfire on October 16, 2017, in Oakville, California. At least 40 people were killed with many still missing, and at least 5,700 buildings have been destroyed since wildfires broke out a week ago. AFP

Foreign Affairs Secretary Alan Peter Cayetano said on Tuesday that a Filipino was among those killed by wildfires that have swept northern California in the US.

Citing reports from the Philippine Consulate in San Francisco, Cayetano said the Filipino’s remains, which “have yet to be positively identified,” were recovered last Saturday in Napa Country.

Various reports said more than 40 people have been killed by the wildfires.

“We offer our sincere sympathies and prayers to the family of our kababayan who perished in this horrific fire. I have instructed our Consulate General in San Francisco to offer all possible assistance to the family and to continue to closely monitor the welfare of other Filipinos in the affected areas,” Cayetano said in a statement.

According to Deputy Consul General Jaime Ramon Ascalon, the consulate has been in touch with the victim’s family and has offered assistance, especially in coordinating arrangements for the repatriation of the victim’s remains.

“We also continue to communicate with the Filipino community through our social media advisories, and have offered consular assistance to Filipinos affected by the wildfires,” he said.

About 100,000 people have fled the fires, while more than 10,000 firefighters are battling 16 large wildfires that have burned over 86,600 hectares, the Department of Foreign Affairs (DFA) said.

The fires have destroyed 5,700 structures and have claimed at least 40 lives, the agency added.

The DFA said 13,500 Filipinos were living in the Napa, Sonoma, and Yuba counties, the areas most affected by the wildfires, while 4,200 Filipinos live in the other affected counties of Lake, Marin and Mendocino. /cbb