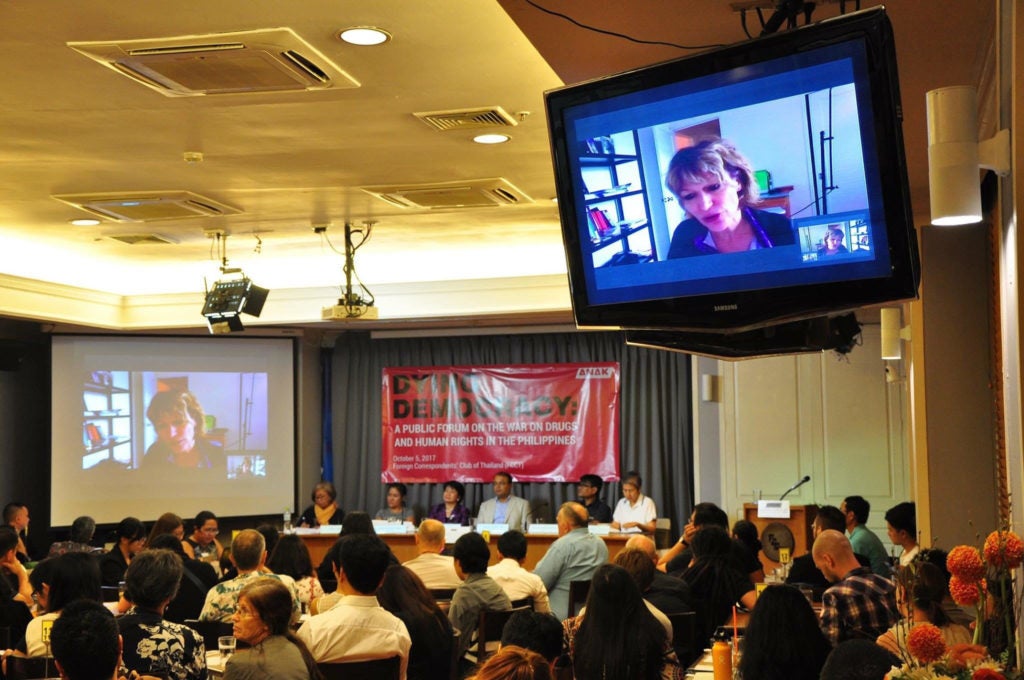 Dr. Agnes Callamard, United Nations Special Rapporteur on Extra-Judicial Summary, or Arbitrary Execution, participated live via Skype in the Dying Democracy: A Public Forum on the War on Drugs and Human Rights in the Philippines last October 5 at the Foreign Correspondent Club in Bangkok, Thailand. Photo by Ron Bagus 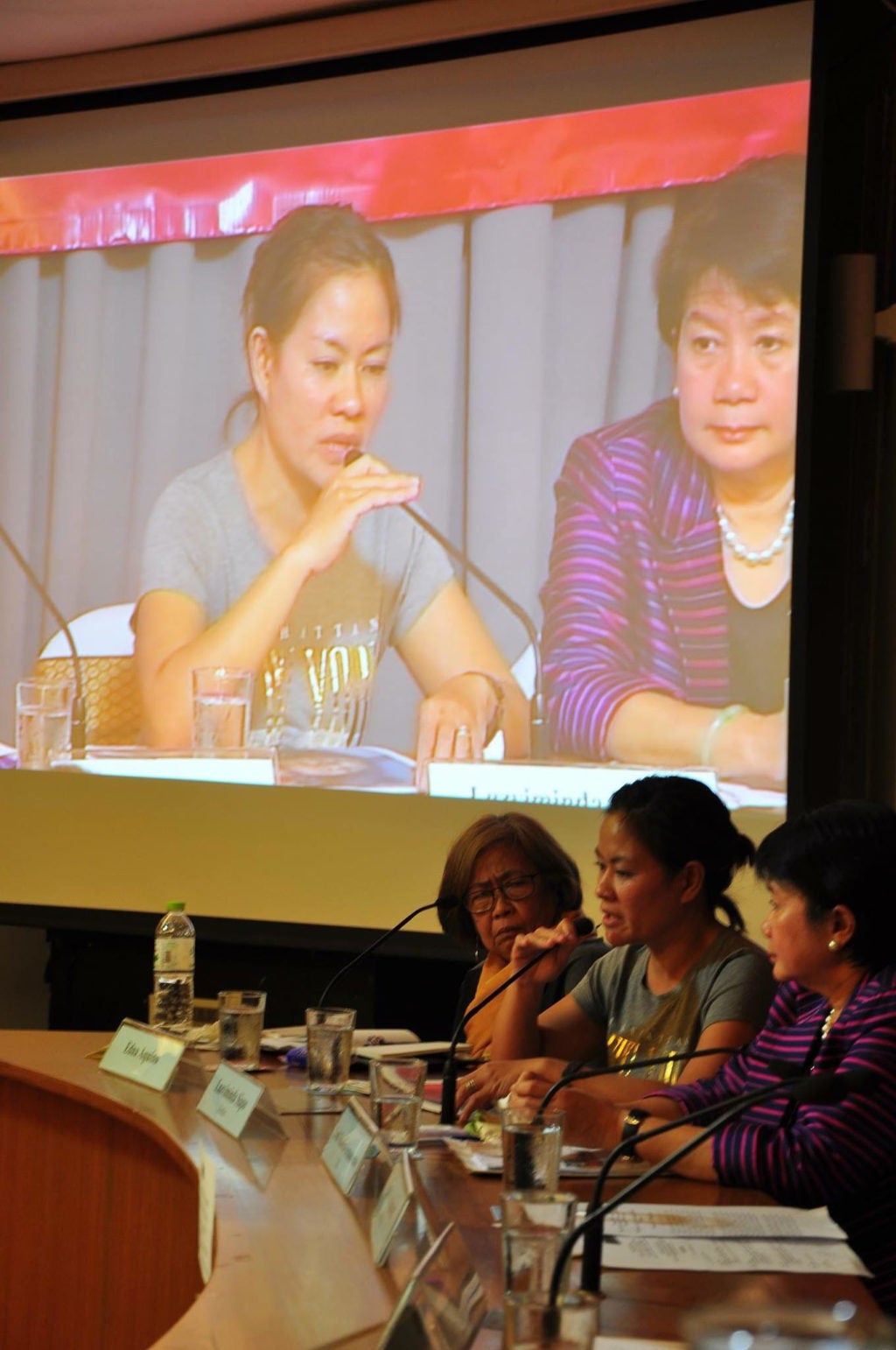 Luzviminda Siapo narrated the circumstances before her son, Raymart, was killed by masked men after being tagged as a marijuana peddler by a neighbor in the Philippines few months ago. Siapo was among the resource persons during the Dying Democracy: A Public Forum on the War on Drugs and Human Rights in the Philippines last October 5 at the Foreign Correspondent Club in Bangkok, Thailand. Photo by Ron Bagus

BANGKOK, Thailand – Raymart, a 19-year-old student from Navotas, was abducted by 14 masked men, including a barangay watchman, near his home on March 29, 2017. He was shot twice in the head and also broke his arm. The night before, Raymart figured in a heated argument with a neighbor that ended up in the village hall, where the neighbor accused the teenager, who had no bad record at all, of being a marijuana peddler.

Witnesses claimed that Raymart was forced by the men to ride with them and, upon reaching an area known as Bangkulasi, was ordered to alight from the vehicle and run. Raymart was wailing for anyone’s help on the street. He just could not run.

“My son Raymart could not run. He had a club foot,” Luzviminda Siapo, a former OFW in Kuwait, told over a hundred audience of Filipinos and other foreign nationals during the Dying Democracy: A Public Forum on the War on Drugs and Human Rights in the Philippines last October 5 at the Foreign Correspondent Club in this city.

According to Luzviminda, that neighbor pawned his house to her. But her family has left the house after Raymart’s death.

The killing of minors as well as the unexplained deaths of hundreds in the Philippines under the government’s campaign against illegal drugs prompted concerned Filipinos in Thailand to convene an informal group called ANAK or the Advocacy Network against Killings in the Philippines.

The group is a union of different non-government organizations (NGOs) and the academe that are “alarmed by the spiraling human rights crisis and political situation in the Philippines under the Duterte administration and deeply worried about the safety and welfare of their family members at home.”

In its statement read during the forum, ANAK condemned the Duterte administration by using the “war on drugs” as a platform to attack democratic institutions.

Presently, the Duterte administration’s drive against illegal drugs has claimed the lives of 13,000 people, many of which were under the custody of the Philippine National Police (PNP) and facing investigations.

Tanodra-Armamento conveyed that the Commission on Human Rights (CHR) has been alarmed on the parallelism of President Rodrigo Duterte’s war on drugs to Martial Law during the Marcos regime where the PNP were given power to suppress and sow terrorism among the citizenry.

Mr. Pokharel noted the need to “reflect deeply” on the value of life. He asserted that Mr. Duterte’s acts are “unbecoming of a leader” when he openly supported the shoot-to-kill policy against suspects and launched personal attacks to those who oppose him.

“Despite the threat of the abolition of the CHR, we are committed to protect the human rights. CHR created Task Force EJK (extrajudicial killings) due to the current phenomenon,” Tanodra-Armamento said.

The CHR official also said that they could hardly cope up with the cases that have not reached the courts because of so-called red tape and tampered evidence, and regretted that if the PNP declared the deaths of suspects were due to “legitimate operations” the cases are considered resolved without further investigation.

Tanodra-Armamento said that CHR is in close coordination with the human rights office of the PNP and Armed Forces of the Philippines for the continuing human rights education of policemen and military, respectively,

However, Tanodra-Armamento lamented that “consciousness on human rights” among the PNP is not directed on the war on drugs.

Dr. Sriprapha Petcharamesree, of the Institute of Human Rights and Peace Studies in Mahidol University, narrated the failed “drug war” in Thailand in 2003 under Prime Minister Thaksin Shinawatra.

According to Dr. Sriprapha, 2,800 individuals were killed in three months under the anti-illegal drugs campaign but the 2007 investigation revealed that half of those killed have no connection to illegal drugs.

Currently, Dr. Sriprapha said that education and research to better understand substance use and abuses are being done in several universities across Thailand.

She then warned about the pattern supposedly being followed by Mr. Duterte in his efforts against illegal drugs.

“Because of the popularity of the leader, harsh measure is approved by the public. This is the danger of populism,” Dr. Sriprapha said.

Nelly Palpallatoc, of OFW Quick Servants, an organization supporting Duterte in Thailand said that under Duterte’s administration, OFWs are given more attention compared to the previous administration.

“Since Duterte became the president, there are so many financial assistance being given to us in Thailand who need help in terms of medical/hospitalization and repatriations in coordination with DFA, OWWA, DOLE, POEA and DSWD” Palpallatoc claimed.

Despite the killings, Palpallatoc believed that police officers are doing their jobs. She also claimed that many of these were done by the criminals and drug pushers to “clean their own mess”.

“If we need to sacrifice one drug lord’s life just to save thousands of innocent people, I do believe God allows it,” she said.

Nancy Catane, from Mindanao, said that people feel safer from what she experienced when she took a vacation last April in the Philippines.

“I take this personally because I have a brother whose life was destroyed by drugs and is now serving his sentence. Duterte’s fight against illegal drugs is not (just the responsibility) of the government but it is everybody’s. He is a God-sent whose heart belongs to the poor and the working class,” Catane said.

But self-confessed former drug user, Mr. Anand Chabungbam, regional coordinator of Asian Network of People who use Drugs (Anpud), said during the forum that Duterte has no right to take away life because he is not God.

Tanodra-Armamento said the victims of the war on drugs are mostly poor from the slum communities.

Mrs. Siapo said that more poor people including minors are killed, and that the families left behind are experiencing difficulties in dealing with the loss. She discontinued her contract in Kuwait and decided to stay in the Philippines to take care of her daughter, who has been traumatized by the death of her brother, Raymart.

She is in close coordination with the CHR but there is difficulty in obtaining statements from the witnesses because of fear from the authorities.

The CHR and international community agreed that public awareness on the effects of drugs must be done in order to also stop stigma against rehabilitated drug addicts.

The CHR said it supports amendments of the Philippines’ anti-drug law as well as proposals to decriminalize drug abuse by making it a health issue that needs to be appropriately addressed.