Marilou Danley tells brother: ‘I have a clean conscience’ 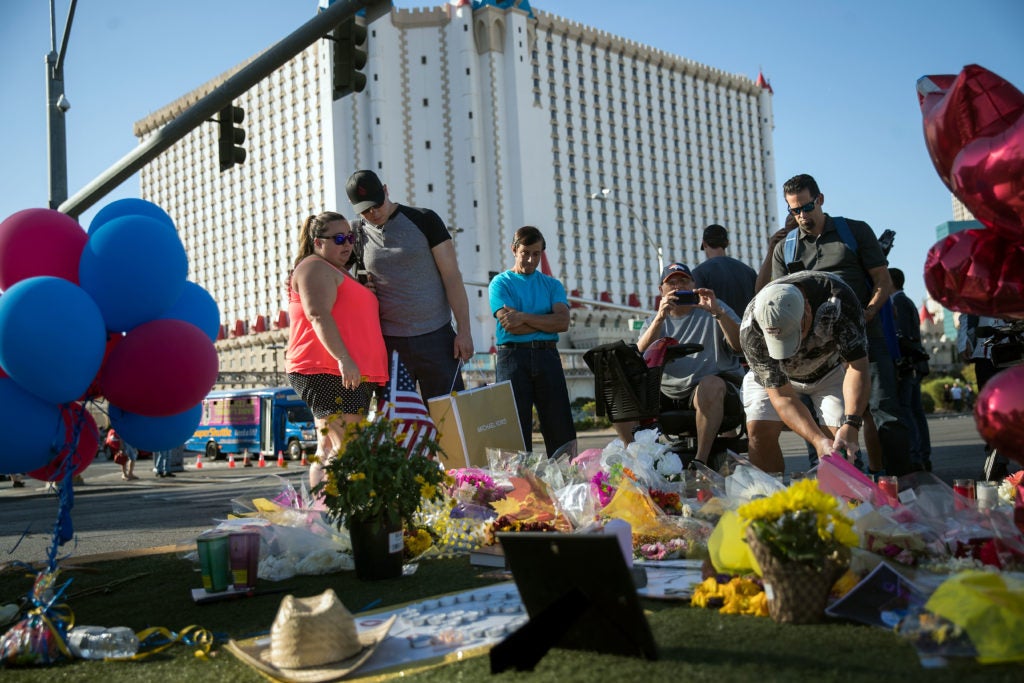 People stop at a makeshift memorial near the site of Sunday night’s mass shooting, along the Last Vegas Strip, October 4, 2017 in Las Vegas, Nevada. On October 1, Stephen Paddock killed at least 58 people and injured more than 450 after he opened fire on a large crowd at the Route 91 Harvest country music festival. AFP

Washington, United States — Marilou Danley, a petite 62-year-old casino hostess from the Philippines, is in the crosshairs of the FBI as the authorities seek to determine what led her boyfriend to carry out the worst mass shooting in recent US history.

Danley was out of the country when Stephen Paddock rained bullets down on concert-goers on the Las Vegas Strip on Sunday night, killing 58 and injuring hundreds more, she said she knew nothing about his diabolical plan.

“I knew Stephen Paddock as a kind, caring, quiet man,” Danley said in a statement read out by her lawyer. “He never said anything to me or took any action that I was aware of that I understood in any way to be a warning that something horrible like this was going to happen.”

Reynaldo Bustos, her brother, told ABC News that he spoke to his sister following the shooting.

“I called her up immediately and she said, ‘Relax, we shouldn’t worry about it. I’ll fix it. Do not panic. I have a clean conscience,'” Bustos told ABC News in the Philippines.

Danley returned to the United States from the Philippines on Tuesday night, according to US press reports, and was met by agents of the Federal Bureau of Investigation at Los Angeles airport.

“I was grateful, but honestly, I was worried, that first, the unexpected trip home, and then the money, was a way of breaking up with me,” the woman said in her statement. “It never occurred to me in any way whatsoever that he was planning violence against anyone.”

Police have not described Danley as a suspect but Las Vegas Sheriff Joe Lombardo said Tuesday that she was a “person of interest” and law enforcement hoped she could shed some light on the investigation.

She is not under arrest or currently facing any charges.

No motive has emerged yet for the deadly shooting spree by Paddock, a wealthy, 64-year-old retired accountant who liked to gamble for high stakes and owned a comfortable home at a golf course retirement community near Las Vegas.

It was through his gambling that Paddock reportedly met Danley, when she was working as a hostess at a casino in Reno, Nevada, several years ago.

“They were adorable — big man, tiny woman. He loved her. He doted on her,” Eric Paddock, Paddock’s brother, told The Washington Post.

Paddock and Danley shared a home in the town of Mesquite, 80 miles (130 kilometers) northeast of Las Vegas, where the authorities found a number of guns while searching the property.

Neighbors have said the couple mostly kept to themselves and were frequently away for weeks at a time on gambling trips.

According to Australian authorities, the Filipino-born Danley has Australian citizenship and has family there.

Interviewed with her face blurred so she could remain anonymous, one of Danley’s sisters told Australia’s 7 News she believed Paddock had deliberately sent her away.

“I know that she don’t know anything as well like us. She was sent away. She was away so that she will be not there to interfere with what he’s planning,” she said.

According to ABC News, Danley left the United States for the Philippines on September 15, about two weeks before Paddock checked into his room at the Mandalay Bay hotel and began the final phase of carrying out an attack that the authorities said was meticulously planned.

Other reports have said she left the country on September 25.

Nick Suarez, a spokesman for the Philippines’ National Bureau of Investigation, said the NBI was looking into reports Danley arrived in the Philippines last month, and that Paddock had sent $100,000 to her via a wire transfer.

According to The Washington Post, Danley married a man named Geary Danley in Las Vegas in 1990 and they divorced in 2015.

“She’s probably one of the most happy, outgoing, full-of-life people I’ve ever known,” Dionne Waltrip, Marilou Danley’s former stepdaughter, told the Times. “Everyone who has ever met her likes her.”