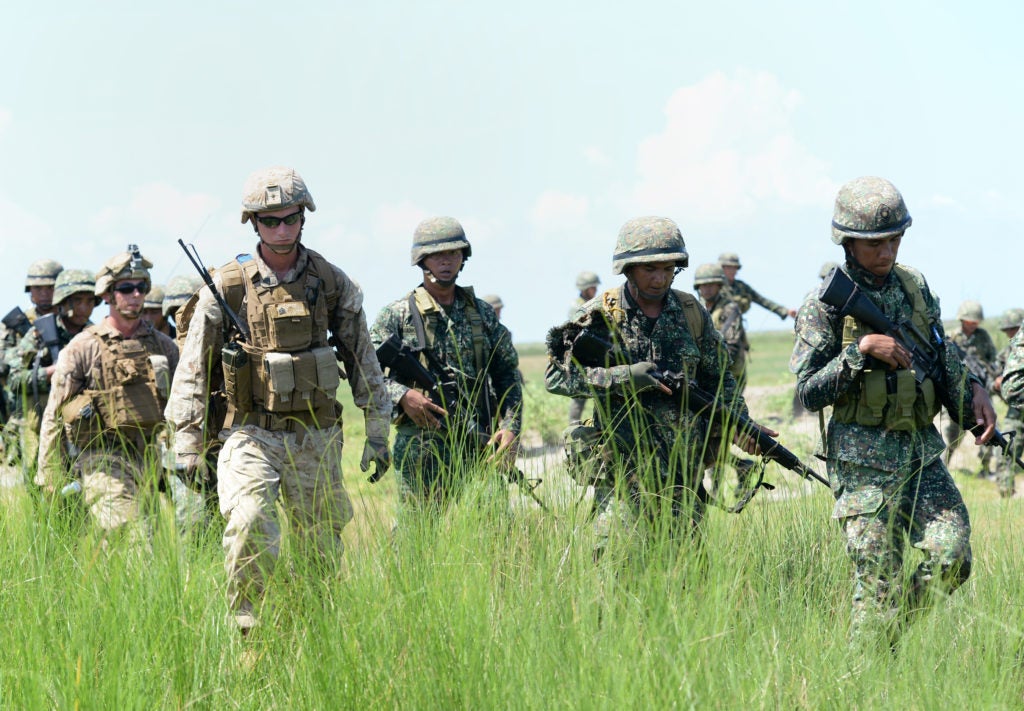 This file photo taken on October 9, 2015 shows Philippine marines (in green) and their US counterparts (in light brown) after simulating an assault during the annual Philippines-US amphibious landing exercise (PHIBLEX) at the navy base facing the South China Sea in San Antonio, Zambales province, north of Manila. US and Philippine troops launched on October 2, 2017 new joint counter-terrorism exercises days after President Rodrigo Duterte, a fierce critic of Washington, reversed course in favour of pursuing one of Asia’s oldest military alliances. AFP

US and Philippine troops launched new joint counter-terrorism exercises on Monday, days after President Rodrigo Duterte, a fierce critic of Washington, reversed course in favor of pursuing one of Asia’s oldest military alliances.

Duterte vowed last week to be “friendly” with the United States, in contrast to comments he made a year ago calling joint military exercises a “humiliation” and threatening to sever defense ties forged after World War II.

The week-long joint operation — another turnaround from Duterte’s initial stand — involves live-fire training, rescues in combat situations, and mass-casualty situations aboard ships, according to the American side.

The US embassy said the drills “will increase overall US and Philippine readiness, improve bilateral responsiveness to crises in the region, and further reinforce our illustrious decades-long alliance,” in a statement on Monday.

About 900 US troops are taking part in the training, to be held in various locations in the northern Philippine region of Luzon, including the former US military base of Clark. The Filipino side did not disclose its numbers.

Duterte, 72, had sought to loosen his nation’s alliance with the United States since assuming the presidency last year as he looked to forge stronger relations with China and Russia.

During a visit to China last October he announced his “separation from the United States” and later explained he was angry at then US president Barack Obama for criticizing his centerpiece war on drugs which has since seen thousands killed.

However Duterte said last week these comments were “water under the bridge” and thanked the US for helping the Philippines fight Islamic militants who occupied parts of the southern city of Marawi on May 23.

The US provided intelligence, weapons and urban warfare training to Philippine forces trying to retake the city in fighting which has left more than 900 people dead.

The continuing Marawi crisis has prompted Duterte to refocus the Philippine-US military alliance towards counter-terrorism.

Last week, US and Philippine forces staged an exercise simulating the seizure of an American plane by IS and a hostage rescue.