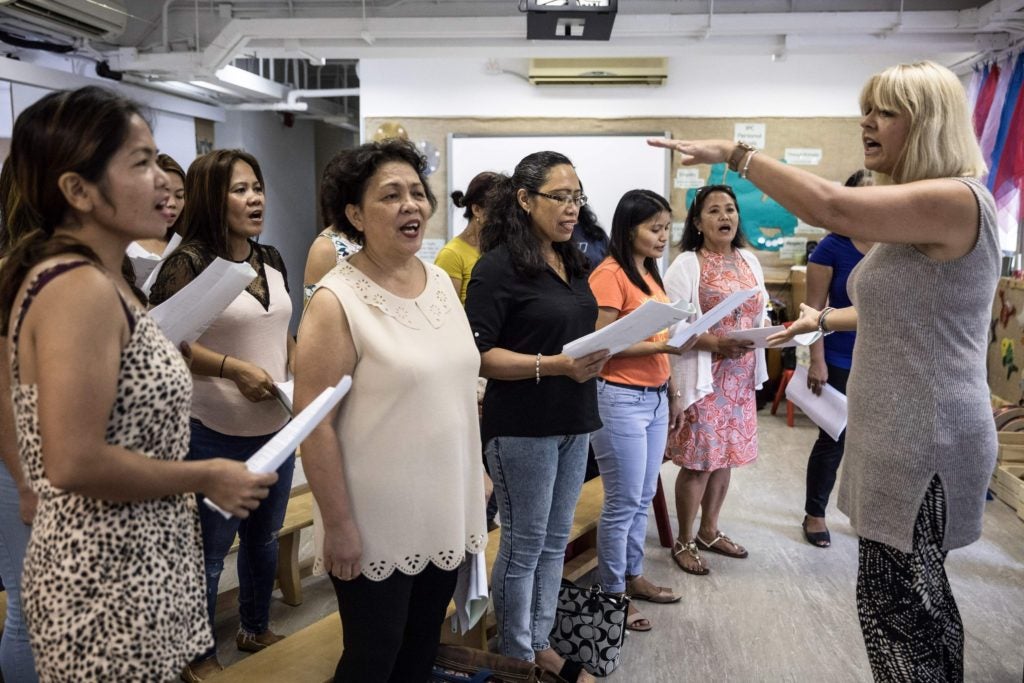 HONG KONG — Each Sunday, a choir of Filipino domestic workers in Hong Kong gathers to sing songs that remind them of the children they left back home.

Known as the Unsung Heroes, these initially shy performers now regularly take the stage around Hong Kong and feature in a new documentary about the lives of the city’s maids, known locally as “helpers.”

The theme of maternal sacrifice runs through the film—many domestic helpers are mothers working their way out of poverty, looking after other people’s children to improve life for their own.

In an empty kindergarten classroom on a Sunday afternoon, the choir races through a series of crowd-pleasers, from Katy Perry’s “Roar” to Bob Marley’s “One Love.”

Songs about their situation

But the songs they knew best were written especially for them and related to their situation.

Their signature ballad, “Kiss You Goodnight,” tells of a wish to be with a child to put them to bed.

Choir member Analyn Tapil, 49, wiped away tears as she recalled how she left her two sons, one aged 4 months, the other 1 year and 7 months, over 20 years ago to earn a better living in Hong Kong.

“It is a very big sacrifice to leave your children but I didn’t have a choice,” said Tapil, who sent most of her salary home to fund her sons’ education.

Now grown up, her two sons have graduated and are working, which she said made it all worthwhile.

“My children are a success,” she said.

Fellow choir member Vergie Anos, 51, has been in Hong Kong for 22 years after leaving her year-old son in the Philippines to create a better life for him.

She also shed tears as she remembered that decision.

“Even until now it makes me feel very emotional,” she explained.

Both Tapil and Anos say the choir has helped them overcome their daily struggles and show they are more than just household employees.

“We are here to make our children, our family proud of us,” Anos said.

In a city of 7.3 million, there are more than 300,000 domestic workers, most of them from the Philippines and Indonesia.

While Anos and Tapil say they are well-treated by their employers, a string of abuse cases has highlighted the suffering some maids endure.

They are legally obliged to live with their employers and have only two weeks to find another job if they are sacked or quit.

It is common for helpers to sleep on floors or in tiny cubicles, with no proper bedroom provided.

They are paid a minimum monthly wage of HK$4,310 ($550) and can never achieve permanent resident status however long they are employed in the city, unlike other workers who can apply after seven years.

But the salary they receive is much higher than at home and convinces many to put up with tough conditions.

On Sundays, their only statutory dayoff, thousands gather in public squares, parks, on pavements and walkways to chat and eat with friends.

The choir is an extension of that community.

Jane Engelmann, head of performing arts at a Hong Kong primary school, launched the group three years ago for anyone in the migrant community to join.

But the word spread most among Filipino helpers, who made up its membership of around 40 singers.

It was she who wrote “Kiss You Goodnight.”

“I can’t imagine not being able to do that with my own children,” said Engelmann, who was a single parent and relied upon domestic helpers so she could go out to work.

Through dedicated practice, the choir is now a polished outfit, even performing alongside international stars at Hong Kong’s largest music festival.

Engelmann calls the choir “one of the most wonderful things” in her life.

The film will be screened at one of the city’s main central cinemas this month and in Singapore.

A soundtrack including songs by the choir, released with Sony Music, will be available on iTunes and Spotify.

As well as portraying the women’s strength, including one domestic helper who climbs mountains in her spare time, the film also conveys the intense emotional toll of leaving children behind.

The film includes the horror of one mother who discovers her young daughter has been sexually abused while she is absent.

“We wanted to see if we could elevate their status,” she added.

For now, the dreams of the Unsung Heroes vary — some are happy to remain as domestic helpers in Hong Kong. Others hope to move on.

Choir member Joy Carbonell, 39, has won local singing competitions thanks to her powerful voice and dreams of being a professional performer and music teacher.

The choir serves as an outlet for her passion.

“Music is the language of my heart and soul,” she said. “When I sing, I represent the 300,000 domestic helpers in Hong Kong.”