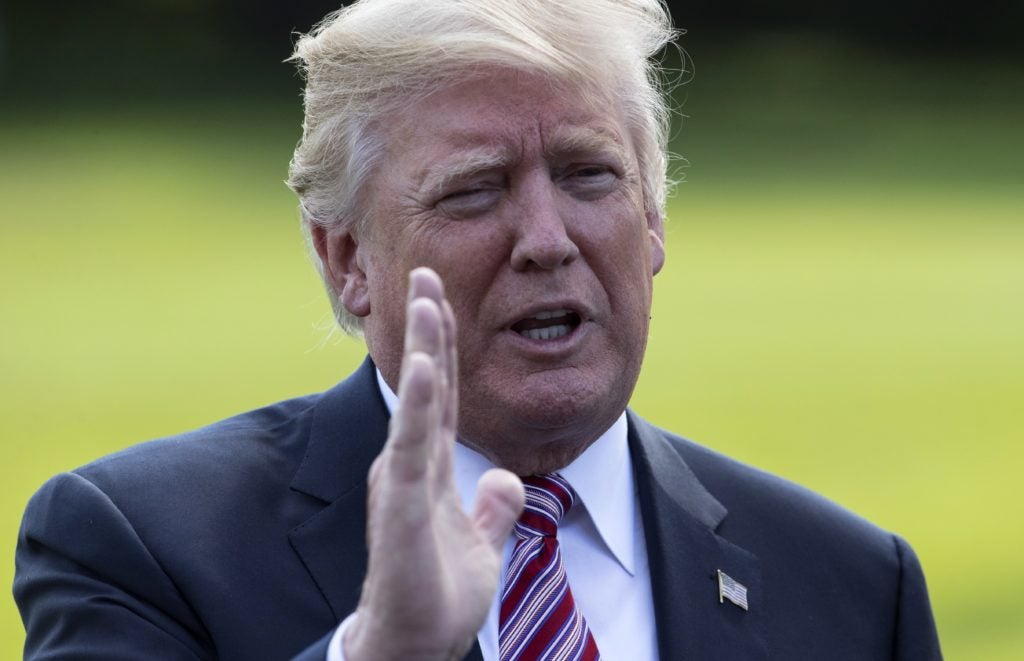 WASHINGTON — President Donald Trump has backed away from a threat to skip a summit with Southeast Asian leaders in the Philippines later this year, with the White House saying it had accepted an invitation from host President Duterte.

In a statement on Friday, the White House said Trump and his wife, Melania, will visit Manila as part of a Nov. 3-14 tour of China, Japan, South Korea, Vietnam and the US state of Hawaii.

It will be Trump’s first visit to the region as president, and it comes as North Korea moves closer to its goal of having a nuclear-tipped missile that could strike the US.

“The president will participate in a series of bilateral, multilateral and cultural engagements—including the Asia-Pacific Economic Cooperation (Apec) summit [in Vietnam] and the Association of Southeast Asian Nations (Asean) summit [in the Philippines] — demonstrating his continued commitment to the alliances and partnerships of the United States in the region,” the White House announcement said.

The announcement sets up the likelihood that Trump will meet the controversial firebrand Filipino leader, who has been accused of “crimes against humanity” for waging a bloody war on drugs that has claimed thousands of lives.

During a visit to Asean’s Jakarta headquarters in April, Vice President Mike Pence had promised allies anxious about waning US engagement in the region that Trump would attend the bloc’s summit in Manila this November.

Since then Trump’s souring bromance with Duterte prompted, in part, by Mr. Duterte’s rights record and his vow in July to never visit “lousy” America had thrown those plans in the air.

Trump said earlier this month that Mr. Duterte had extended an invitation, but the US president pointedly said he had not yet decided whether to accept, while announcing he would go to Japan, South Korea, China and, maybe, Vietnam for the Apec summit.

Philippine officials were surprised by the about-face and the issue was raised during Foreign Secretary Alan Peter Cayetano’s visit to Washington this week.

Republican Sen. Cory Gardner, who met Mr. Duterte in the Philippines earlier this year, was among those who urged Trump to attend.

“I think it’s very important that the president travel to the region for the summit,” he told the French news agency Agence France-Presse (AFP).

“Now more than ever the United States needs to show its leadership not just in rhetoric, but in action, in visible ways,” Gardner said.

Trump’s attendance at the Manila summit had been in doubt until recent days, with officials saying he was reluctant to show support for Mr. Duterte, who has been responsible for a number of anti-American outbursts.

A US official said Asian leaders who met Trump at the United Nations General Assembly in New York last week also helped persuade him to attend in unity with key Asian allies.

An Asian diplomat welcomed Trump’s decision to visit Manila “because that reassures the region that Asia policy is not just about North Korea, it’s about Southeast Asia as well.”

The diplomat said Trump’s decision to withdraw from the Trans-Pacific Partnership (TPP) trade deal early this year had raised questions about the administration’s commitment to the region.

But visits by senior officials, including the secretaries of state, defense and commerce, and Trump’s planned trip, showed Washington intended to remain engaged.

Cayetano said Mr. Duterte was looking forward to meeting Trump, adding that the relationship between the two countries was so resilient that ties would always recover, regardless of disagreements.

Trump, who has been locked in an increasingly bitter war of words with North Korean leader Kim Jong-un, will have the opportunity to bolster allied resolve for what he calls the “complete denuclearization” of Pyongyang.

Trump has offered fiery rhetoric and a tough stance against the North’s nuclear weapons program, declaring in a speech to the United Nations General Assembly last week that the US would “totally destroy” North Korea if provoked.

North Korea responded with pledges to take the “highest-level” action against the United States and warned that it might conduct the “most powerful” atmospheric hydrogen bomb test in the Pacific Ocean.

Early in his tenure, Trump courted controversy by praising Mr. Duterte for doing an “unbelievable job on the drug problem.” Duterte’s crackdown on alleged drug dealers has seen the police kill an estimated 3,850 people in 15 months and made him a virtual pariah.

Both men have shocked with similar barbed language: Mr. Duterte’s favored insult, “putang ina,” was recently echoed in English when Trump called an NFL player a “son of a bitch.”

But Mr. Duterte had been angered by a US Congress human rights commission hearing, where various advocate groups assailed his bloody war on drugs.

Aides were left trying to convince Trump who has also been skeptical of multilateral institutions and shown modest interest in Southeast Asia that it is important to attend.

Fast-growing Southeast Asia has become a focus point for US trade and sits astride a major geopolitical hot spot, the South China Sea.

US governments have tried to defend the right of free passage there as China and other countries make increasingly forceful maritime and territorial claims.

“It would be very noticed in a negative way if he did not go, while all the other leaders are there including the Chinese premier,” said Amy Searight, a former top Pentagon official for Asia, now with the CSIS think tank.

US presidents have not always played much attention to the Asean bloc, which includes the fast-growing economies of Vietnam, Thailand, Indonesia, Singapore, the Philippines and five other countries.

Former President Barack Obama was the first president to regularly attend the Asean summit, donning flamboyant local shirts and posing arms-linked for photos with leaders as part of his much-vaunted “pivot to Asia.”

Trump has taken a wrecking ball to much of Obama’s legacy, including knocking away a key pillar of the pivot by scrapping the TPP trade deal, embraced by many Asean partners.

But Trump’s decision to attend leaves a delicate problem about what to do when he and Mr. Duterte meet.

A warm embrace would likely be seen as an endorsement of Mr. Duterte’s policies.

“In response, President Trump has offered nothing but praise. We hope that at the summit this fall, cooler heads will prevail,” she said.

On the other hand, snubbing a “treaty ally,” officials argued, would not go unnoticed in Beijing or other capitals, where there is a desire to capitalize on any opportunity to limit US power in the region.

Since 1951 the United States and the Philippines have had a mutual defense treaty, meaning Washington would defend Manila in any potential war.

Gardner, who sits on the Senate foreign relations committee said engagement was essential. He said global leaders “have to have frank discussions with each other and they need to move beyond press release diplomacy, no one should be afraid of that.”

“We need to make sure concerns are stressed directly. This is not North Korea,” he said. “We are a defense treaty ally of the Philippines and there is a strategic imperative to maintain that relationship.”  —With reports from the wires

Read Next
Ouster of PH from UN body sought over drug killings
EDITORS' PICK
LTO’s P500-M deal for screws draws scrutiny
Smart reinforces superiority with best speed and mobile video experience in PH
Every Filipino home can now be a smart home with realme TechLife
Nestlé Philippines’ ‘NESCAFÉ Plan’ bags Grand Anvil at PRSP 56th Anvil Awards
New 3,045 COVID-19 cases push PH total active cases to 40,074
How to lose a PH genius: Wesley So officially a US citizen
MOST READ
Robredo on Sara Duterte leading poll surveys: Why are Filipinos drawn to leadership of this kind?
How to lose a Filipino genius: Wesley So officially a US citizen
Hugpong Ng Pagbabago fully supports Sara Duterte says confidant Davao del Norte governor
Duterte on his ‘faults’: ’I just have cases of extrajudicial killings’
Don't miss out on the latest news and information.