Duterte warms up to US, seeks ‘friendly’ ties 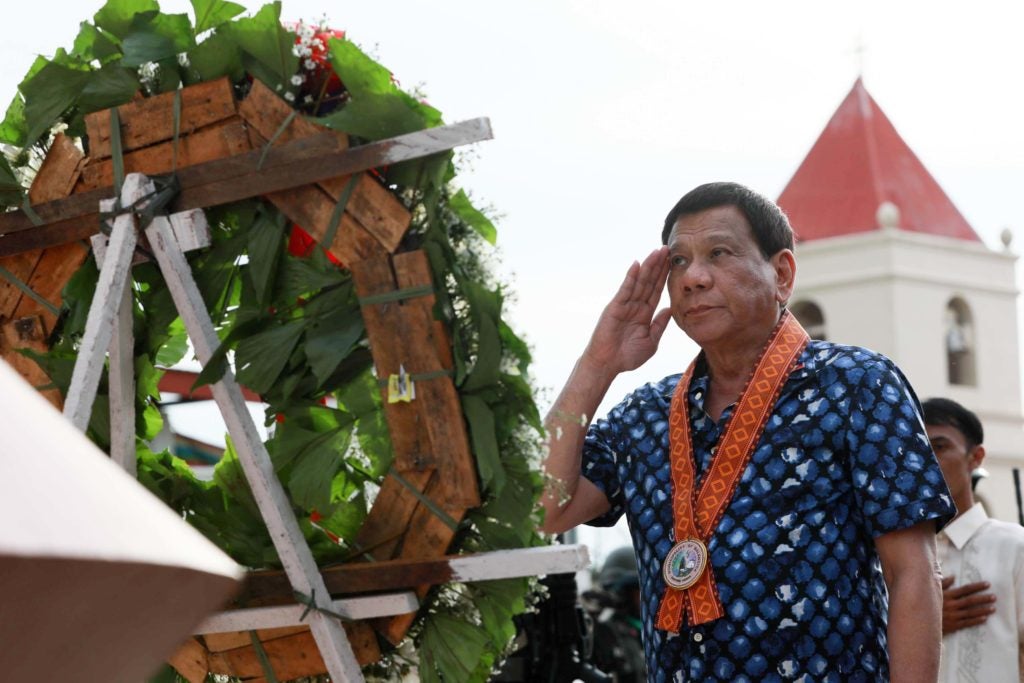 Despite his much-publicized pivot to China, President Duterte said he wanted to have “friendly” relations with the United States and said he would halt his foul-mouthed rants against Washington as the two treaty allies focused on fighting Islamic State (IS)-linked militants in the Philippines.

Speaking on Thursday in Balangiga, Eastern Samar province, on the 116th anniversary of an attack by Filipino revolutionaries on US troops stationed in the town during the Philippine-American War, the President said the Americans had “redeemed themselves.”

“There are so many factors involved but I’d rather be friendly to them now because aside from these episodes of, I said, sad incidents, overall I think the Americans also redeemed themselves a lot,” Mr. Duterte said in his speech.

The attack pushed American troops to massacre the Filipinos in Balangiga and take the town church’s bells as war trophies in 1901.

Manila is negotiating with Washington for the return of the bells, which were used by the insurgents to signal the attack that nearly wiped out the US contingent at Balangiga.

“There were many other massacres especially in Mindanao and the Moros. This is all water under the bridge,” Mr. Duterte said. “I was under advice by the Department of Foreign Affairs, that I would temper my language and avoid cursing, which I am prone to do if I get emotional.”

The President said the Americans had provided “a lot” of help to Filipinos, not just during World War II.

Not saviors, but allies

“I will  not say they are our saviors, but they are our allies and they [have]  helped us. Even today, they provide crucial equipment to our soldiers in Marawi to fight the terrorists,” Mr. Duterte said.

“So without their help, we would be having a hard time. So we thank you,” he added.

The United States deployed a P-3 Orion spy plane and provided other intelligence inputs to Philippine forces trying to retake the city in fighting which has left more than 900 people dead.

Since coming to power last year, Mr. Duterte has tried to steer the Philippines closer to China than to the United States.

The President had ranted at the United States many times, at one point calling former US President Barack Obama a “son of a whore” in reaction to Obama’s criticism of Mr. Duterte’s war on drugs.

During a visit to Beijing last October, Mr. Duterte announced his “separation from the United States,” stating he was realigning with China and Russia instead.

He explained that, at the time, he was angry at Obama for criticizing his centerpiece war on drugs, which has left thousands dead.

The President also often referred to the United States as a “hypocrite” that preached human rights but turned a blind eye on its own crimes, like the expulsion of Iraqi dictator Saddam Hussein on the pretext of searching for what turned out to be nonexistent weapons of mass destruction.

During his speech, Mr. Duterte used cuss words at least five times but not against the United States.

Since Donald Trump replaced Obama as president, Mr. Duterte’s attacks on the United States have decreased, though he vowed never to go there and last week passed up the opportunity to attend the UN General Assembly in New York.

Mr. Duterte sprang a surprise last month with a warm reception for visiting US Secretary of State Rex Tillerson, describing himself as a “humble friend” of the United States.

Regarding the return of the Balangiga bells, Mr.  Duterte said the effort could outlive his tenure.

He said American war veterans were opposed to the bells’ return, which would make it difficult for the US government to return them.

At the House of Representatives, Mr. Duterte’s quest for the bells’ return was backed by a resolution passed early this week.